The Cy-Bugs are the group of tertiary antagonists of the 2012 animated Disney film Wreck-It Ralph. These menacing creatures are robotic insects, which are a deadly threat to not only their game, Hero’s Duty, but the entire arcade. They know just three things: Eat, kill, multiply. Players beware! Cy-Bugs can morph into anything they eat—from an attack buggy to an assault rifle. They do have one weakness—an attraction to bright light (They are bugs, after all.). They do not speak unless they swallow someone who does.

Also in the non-canonical video game version of Wreck-It Ralph, the Cy-Bugs have a leader named the Cy-Bug Queen.

Cy-Bugs are savage and destructive creatures. As their name suggests, they are robotic bug-like beings with many insect-like qualities, for instance the ability to fly, pitchers, and crab legs. They attack any other living creature that moves, all but their own kind. In hours, they came multiply to hundreds by laying sensitive eggs, that can hatch by even the slightest touch. One of their most dangerous features is their ability to absorb any person or item they devour. It is known that if they eat a living being, that being may become a Cy-Bug as well, as seen in King Candy's case.

It is said that Cy-Bugs came from experiments that went wrong. In Heroes' Duty comic, spin-off of Wreck-It Ralph film, that statement was true: Cy-Bugs initially developed from harmless bio-mechanical toys. Unfortunately, when these toys are under developement and found that can be utilized as weapon, everyting was beyond control: They accidentally released and went berserk.

All theses facts make the Cy-Bugs dangerous and powerful creatures.

The Cy-Bugs first appear when Ralph steals Markowski's armor and game-jumps into Hero's Duty to earn the Medal of Heroes. After joining the other soldiers, Ralph is forced to battle a large swarm of Cy-Bugs, one of which eats his gun. As Ralph flees from the bugs, another swarm is released out of the tower, and Ralph gets the gamer killed by hiding behind her as another Cy-Bug lunges at them and consumes the first-person shooter. The Cy-Bug next attacks Ralph, but a beacon is set up and the bugs mindlessly fly into the beacon, destroying them all. The leader of the squad, Sergeant Calhoun, berates Ralph for interrupting the first-person shooter and the squad leaves for the next game. Ralph, unwilling to go through the attack again, removes his armor and instead climbs up the tower to get the medal.

After punching his way into the tower, Ralph comes upon multiple Cy-Bug eggs. As he avoids stepping on them, he finally earns the Medal of Heroes. General Hologram shows up in a hologram to honor Ralph, only for Ralph to step on a Cy-Bug egg. The bug breaks out of the egg and instantly attacks him, causing both of them to fall into an escape pod and blasting the two off. The bug grows at a rapid egg and tries to consume Ralph, but the jet flies into a different game, Sugar Rush. The jet is damaged by the Cy-Bug and it crashes. The Cy-Bug and Ralph recover from the crash and the bug hits the ejection button, sending them flying out of the jet. While Ralph falls on a tree, the bug lands in the taffy swamp and sinks, leading Ralph to believe it died.

Calhoun and Fix-It Felix, Jr., who went looking for Ralph when he disappeared, enter Sugar Rush to destroy the Cy-Bug before it multiplies. Before they enter Sugar Rush, Calhoun has a flashback of a Cy-Bug devouring her fiance when they were about to get married. Calhoun and Felix come upon the damaged jet, where there is no trace of Ralph or the Cy-Bug. Calhoun can't use her tracker to find the Cy-Bug, because the environment of Sugar Rush is jamming her scensers. The two soon fall into nesquick sand, where they have to work togother to escape, and they start to fall in love. They repair the jet and use it to fly off, unaware that the Cy-Bug has burrowed undderground and has eaten a candy root, causing its armor to turn candy-coated.

Calhoun soon abandons Felix when he unintentionally caused her to remember her fiance getting killed by a Cy-Bug, and he is thrown in jail by Sour Bill, the assistant of King Candy, the ruler of Sugar Rush. Calhoun's sensor starts working again, and she finds that hundreds of Cy-Bugs are in the area, but can't see them. After falling underground, she finds that the candy-coated Cy-Bug has laid hundreds of eggs, and some Cy-Bugs have already hatched. She escapes from the bugs and finds Ralph and Felix during the Random Roster Race, cheering on the young glitch Vanellope. She blames him for bringing the bug into Sugar Rush, confusing him in that he thought the bug died. Right at that moment, the bugs underground all hatch and burst out from the ground and attack.

The Cy-Bugs start flying to the finish line, which has a bright shining golden cup on it. Ralph tries to keep them from destroying the finish line by destroying them, but he is distracted when he sees King Candy attacking Vanellope on the large screen. As they fight, Vanellope exposes King Candy as Turbo, from the game TurboTime. After Vanellope escapes from Turbo, a Cy-Bug jumps in front of the evil racer and devours him. As Vanellope drives towards the finish line, more Cy-Bugs burst from the round and knock Vanellope off the track, destroying her kart in the process. The swarm finally manage to destroy the finish line, and the residents of Sugar Rush are evacuated to Game Central Station. Calhoun prepares to bomb the exit, but Vanellope is unable to leave due to being a glitch. Ralph, having realized Cy-Bugs are attracted to light, flies to Diet Cola Mountain to erupt the volcano. Unfortunately, Turbo, having fused with the Cy-Bug, attacks Ralph and tries to force him to watch Vanellope consumed by a swarm of Cy-Bugs. Ralph frees himself from Turbo and finally erupts the volcano, and the Cy-Bugs immediately fly into the volcano, obliterating them. Turbo tries to resist the urge to fly into the volcano as well, but his Cy-Bug programming overwhelms him and he flies into the volcano, killing him and the other Cy-Bugs. 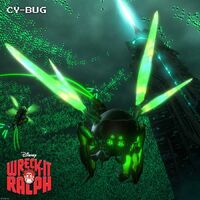 The Cy-Bug being crashed into a tree

The Cy-Bug sinking into a taffy swamp

The Cy-Bugs appearing from the ground of Sugar Rush

The Cy-Bugs flying to the beacon

The Cy-Bugs being vaporized to their deaths 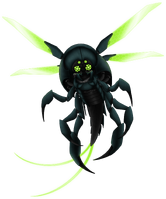 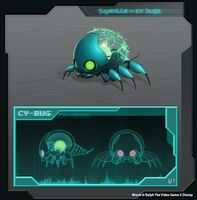 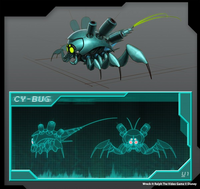 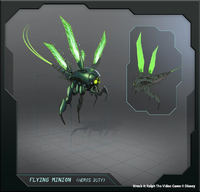 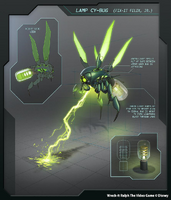 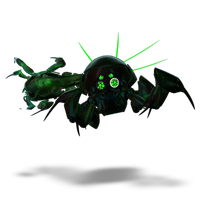 Retrieved from "https://villains.fandom.com/wiki/Cy-Bugs?oldid=956826"
Community content is available under CC-BY-SA unless otherwise noted.