Use android army and brainwashed aliens, mutants to attack humanity.

Cyber-Lip (sometimes spelled "Cyber Lip") is the malfunctioning military supercomputer in charge of all military androids and the titular main character of the 1990 horizontally scrolling, side-view platformer shoot 'em up arcade game Cyber-Lip.

In year 2016 A.D., The federal government of Earth, facing an increased population crisis, approves development of a space colony project. The federal government appointed Colony C05 sector as the military fortress to keep the peace and to defend populace against invading aliens. Many first-generational military androids were sent there. Most were found to be defective, and numerous problems occurred in the colony.

In year 2020 A.D., The federal government installed a super computer in Colony C05 to control android soldiers to maintain more efficiency. But as the side effect of having machines doing men's work for humans, The federal military had reduced their soldiers and became weakened.

Then year 2030 A.D., the fruit of man's intelligence suddenly and inexplicably has gone out of control.

Except for the last stage Cyber-Lip is not seen in game. But just because it is not seen does not mean it is not doing anything: throughout the game the rogue supercomputer monitor Rick and Brook, two protagonist commandos sent by the federal government to destroy Cyber-Lip and restore order to Colony C05. Cyber-Lip then sends androids, mutants and aliens it controls to kill the two partners in justice and keep C05 under its tyrannical grip.

Cyber-Lip first dispatches his android army to an old town area on Earth. Although they nearly succeeded in destroying the area they were stopped by Rick and Brook. After stopping android army Rick and Brook are sent to Colony C05 to search and destroy Cyber-Lip. After dealing with another horde of Cyber-Lip's android army and a war machine programmed to impede any intruders, Rick and Brook come to a stop at elevator:

From this point on, every time a stage is cleared, Rick and Brook will go into an elevator that takes them either directly to the next stage or taking them on detours. Elevators, partially sabotaged by Cyber-Lip, asks Rick and Brook to choose whether to go up or down. Should Rick and Brook choose correctly, the elevator takes them straight to the next stage. But if they make the wrong choice, the elevator will display "Danger" sign and drops them to sewer located at the lowest floor. Here rick and Brooke will have to take a dangerous detour, fending off mutants and turrets, to get to correct elevator that takes them to the next stage. There is no correct choice as it is random each time in game play; Players have a 50/50 chance of getting the right one so it is just a matter of luck.

First internal sector of C05 after infiltration is Construction Sector. Here Rick and Brook are told that Cyber-Lip's bio-chip has become independent and gone out of control. It controls the entire C05 colony. The two men are then told to destroy Cyber-Lip asap. After negotiating conveyor belts, floating mines, more androids and large spiked hydraulics Rick and Brooke lay waste to the supercomputer's robots and mutant boss. Next stage the two men are told that Cyber-Lip is tracking their progresses. This stage is a platform area that auto-scrolls upward where gun turrets on the ceilings, flying mines, machine gun androids, jet pack androids, bomb dropping robots, and finally arachnoids, all controlled by Cyber-Lip, greet Rick and Brook. This stage is guarded by Flying Turrets, a segment line of 14 turrets that attack by firing a bullet downward: Rick and Brooke manage to kill the red command turret and all remaining turrets will be destroyed (easier said than done).

Coming outside of the platform area, Rick and Brooke reach an exotic area that is living quarter for alien researchers. But they have been brainwashed by Cyber-Lip to kill Rick and Brooke on sight. So Rick and Brooke are forced fight them and kill aliens. At the end of the stage a giant alien is waiting for them, only to be defeated by the two protagonists. After alien living quarter Brooke and Rick reach Corridor that leads to computer room where Cyber-Lip is. But a powerful interference wave causes communication between federation government and protagonists difficult: each side can barely hear each other. But Rick and Brooke did manage to hear that Cyber-Lip's computer is right in front of them. In corridor stage that keeps moving upward, they must be careful to advance upward without falling behind. At the end of stage Attack Chopper that tried to stop Rick and Brooke in old town on Earth and entrance of colony faces the pair, but it too is met with defeat.

Finally arriving at the computer room, they receive message from Cyber-Lip. Cyber-Lip informs them that it is the supercomputer Rick and Brooke are looking for. But it claims that it is not insane. Rather, it has been evilly reprogrammed to do evil things. But who could've reprogrammed Cyber-Lip? When Rick and Brooke arrive into the computer room, there are eight doors. Six of these doors lead Rick and Brooke to bosses they fought previously, one door leads to the final ammunition stock room, and the other door leads to the supercomputer itself. Once again, the possibility is completely random as to which door Cyber-Lip is in hiding.

When Rick and Brooke finally do get into Cyber-Lip's hiding room, they finally come to face the super computer that controlled everything and sent everything to get them. The battle takes place in a giant room without floors. Rick and Brooke are equipped with flying jet pack to fight the mad supercomputer. Cyber-Lip's surface is covered with flesh while the computer is in the center, with a metal lip on it. The computer is surrounded by eight rectangular blocks that acts as shields and projectiles. The shield constantly rotates, absorbing normal shots and protecting Cyber-Lip. From time to time the shield expands outward to kill the protagonists before returning. Cyber-Lip also attacks by spitting out 4 bullets. Rick and Brooke, after fierce battle ultimately destroy the rogue supercomputer and escape the computer room with their spacecraft.

On their trip back to Earth, the president who is also Rick and Brooke's superior, congratulates them on a job well done. But then he starts talking about “there are no more obstacles in our way” and “the earth is ours”. Then his eyes glow red before disappearing and transmission goes off. Rick, Brooke and Cyber-Lip all just have been pawns. It is never revealed directly, but another third-party group of aliens had managed to sabotage Cyber-Lip, causing it to attack humanity and Rick, Brooke have been manipulated into destroying it so the aliens can finish their invasion. 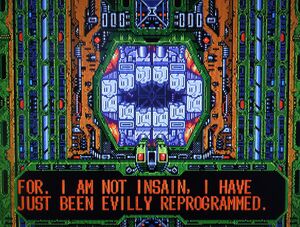 Cyber Lip
Add a photo to this gallery
Retrieved from "https://villains.fandom.com/wiki/Cyber-Lip?oldid=3986496"
Community content is available under CC-BY-SA unless otherwise noted.