To take his revenge by terrorizing New York.

To defeat his own son Zilla Junior.

Mechanically Modified Monster
Cyber-Zilla is a revived form of Zilla and a major antagonist of Godzilla: The Series. He was the original Zilla until the Tachyons from the Leviathan spaceship resurrected it using alien and human technology. He is completely under the aliens' control, although he does recognize Zilla Junior as his son.

After Zilla's death, the military base where his body was studied was overtaken by Tachyons, who used their technology to resurrect the dead beast. H.E.A.T. sent Zilla Junior to stop the Tachyons, but was hesitant to fight against Cyber-Zilla due to recognizing him as his father. The Tachyons were then able to take control of Junior. Afterwards, the Tachyons sent their monsters to destroy various cities, with Cyber-Godzilla choosing Tokyo.

H.E.A.T. is later able to return Zilla Junior to his senses and he attacks the Tachyons' base once again. The Tachyons are able to bring back Cyber-Godzilla from Tokyo to stop Junior. At first, Cyber-Godzilla attempts to allure Zilla Junior to join him, but Junior chooses Nick Tatapolous over Cyber-Zilla and fights him. As he and his son fight, Cyber-Godzilla's right cybernetic arm is accidentally blasted off by Tachyon fighters. Zilla Junior later viciously tears off the metal covering of Cyber-Zilla's chest and tears out many of his internal wires, causing the rest of the creature to short-circuit. Cyber-Zilla can only let out a rattle before dying again, this time for good.

Cyber-Zilla resembles the regular Zilla, with the exception of the metal armor, but its skin color was changed to a light brown, showing decay. Its atomic breath is blue, like the real Godzilla, and it has a disk in its chest which can reflect weaponry and can fire missiles from its dorsal fins. 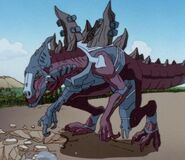 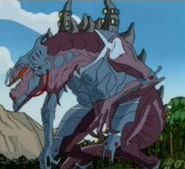