Cyber Peacock is one of the eight Mavericks who appeared in Mega Man X4. Once a guardian used to protect the network from any and all hackers, he was changed by Sigma into being a hacker himself. He only exists as a Maverick to test X and Zero's strength, much like Split Mushroom was after he awoke from his nap. In the end, he also dies.

Cyber Peacock uses the Aiming Laser for his weapon. This allows him and other who wield the weapon to fire lasers that lock onto enemies. Cyber is weak to the Soul Body, which X can get his hands on after he defeats Split Mushroom.

Cyber began his life as a guardian for the internet, but Sigma attacked and transformed him into a virus. No longer able to protect the Network following his transformation, Cyber Peacock lost his mind and began to corrupt the network, slowly destroying it. He was tasked alongside Split Mushroom's as distracting Mavericks in order to stall X and Zero from stopping Sigma's scheme in coercing Repliforce's omnicidal plan.

Peacock proves to be a tough boss, as he teleports around and appears only to deliver an attack, after which he vanishes again. When he appears, he will either do a jumping maneuver or expand his tail's mechanical feathers, which cover a considerable area around him and protect his body. After taking enough damage, he appears on the center of the arena, after which he puts a target on the player and starts shooting homing missiles which are very tough to avoid. His weakness is the Soul Body (which can dazzle and stun him) and the Ryuuenjin. 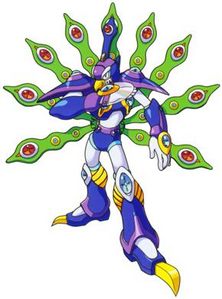