Plotting for his escape from cyberspace.

Take over the real world.

Like the Utrom and Tengu Shredder, he is voiced by Scottie Ray.

At one point, the Turtles ended up in a future where the Utrom Shredder and the Tengu Shredder were engaged in battle with each other. However they were also fighting a Shredder the Turtles had never seen before (Cyber Shredder), but he still knew who they were.

As a contingency in the event of his demise, Ch'rell created a cybernetic engram of himself using a combination of Utrom technology and Earth machinery. The Shredder engram was locked away in a data vault, but eventually Viral, who had come to the present day, found it. She tried to access it, but the defenses were activated in response and the engram infected her, reformatting as the Cyber Shredder. He contacted a devoted Foot Clan operative, Master Khan, and planned to make his escape from cyber space so as to conquer New York.

Cyber Shredder had his first encounter with the Turtles when they entered cyber space looking for pieces of Splinter. Though they escaped him, he discovered they had a cyber portal, A.K.A. his ticket out of cyber space.

After Hun and the Purple Dragons started to raid Foot treasure vaults with use of advanced technology, Cyber Shredder got suspicious, since such plans were beyond Hun. He linked into Dragon HQ, finding out that Baxter Stockman, now sporting a new cyborg body, had been hacking into the Foot Database. Cyber Shredder realized Stockman's cyborg body could be a means for him to escape cyber space. He successfully took control of it, making a few additions to it, so that it resembled his appearance in cyber space, as well as power gauntlets to increase its power. Cyber Shredder proceeded to wreck Dragon HQ and was pleased when the Turtles showed up, though without Donatello. However, when Stockman joined forces with them, Donatello got into Cyber Shredder's base, taking away his control.

Cyber Shredder's next plan was to make the Turtles into his slaves and when they found a cluster of Splinter's data in cyber space, he used a virus on them. It brainwashed the Turtles so that they thought they were Foot Ninjas loyal to Cyber Shredder, who commanded them to take care of the Purple Dragons. Though Casey, April, and Serling succeeded in bringing out their memories and freed them from Cyber Shredder's control, he succeeded in his true goal. While Donatello was under his control, Cyber Shredder had extracted the memories he needed to construct a cyber portal, so he could leave cyber space.

After completing his cyber portal, Cyber Shredder needed to make sure it worked completely and sent virtual animals from a nature website to the real world. However each one sent through came out mutated and wrought havoc in the city, so the Turtles had to deal with them. Cyber Shredder worked on his portal so each animal was less mutated than the last and eventually perfected it, sending a non-mutated chipmunk and cyber version of Khan through. The Turtles realized what Cyber Shredder was up to and while Leonardo and Raphael headed to where he planned to emerge, Donatello and Michelangelo went into cyber space to deal with him. Donatello managed to hack Cyber Shredder's portal, while he was uploading himself to the real world, but he came out mutated and partially data. This let the Turtles use darts on Cyber Shredder that deleted cyber life forms, sending him back to cyber space, but he swore to make them part of his escape.

Cyber Shredder hacked into New York's central hub, taking control of all the systems in the city. The Turtles soon discovered his presence in the real world and entered the hub to undo his actions before it became permanent. Donatello and April managed to free the city from Cyber Shredder's control, but the Turtles were unable to beat him in combat. However, Michelangelo used the same trick Splinter used against the Utrom Shredder in the first battle, tricking Cyber Shredder into cutting the catwalk they were on. As a result, he fell onto an electrode, damaging his body, but his digital core was unharmed. Cyber Shredder's gauntlet pierced a wire, allowing him to return to cyber space and the energy he absorbed as a result of the electrical surge made him stronger than ever.

Cyber Shredder succeeded in infecting one of the last of Splinter's data bits with a virus before the Turtles could get it. After they converted Splinter back into matter, the virus became a homing beacon that Cyber Shredder used to track them. He found them at Casey and April's wedding, which was taking place at Casey's grandmother's farmhouse, before launching a full attack on the Turtles and wedding guests. In the fight, Cyber Shredder attempted to kill their friends by collapsing the barn upon them, but they managed to escape before they were killed. During the final battle with the Cyber Shredder, Donatello extracted the homing beacon from Splinter, using it to get a sample of Cyber Shredder's digital core. With this, Donatello was able to use Serling's decompilier blast to bear and bring an end to Cyber Shredder, possibly preventing the future where the three Shredders battle.

Since he is a digital being, Cyber Shredder is able to travel through and control cyberspace, as well as hack into computer networks. Due to being a engram of the Utrom Shredder, Cyber Shredder possesses a good deal of cunning, as well as his fighting skills and mainly utilizes his bladed gauntlets in combat. 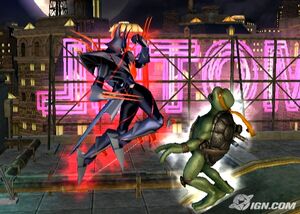 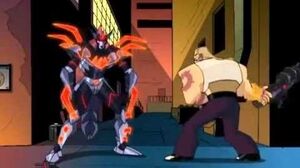