Engaging in monster infighting when not killing humans.

Ensure Hell's conquest of the universe (both failed).

The Cyberdemon is one of the most powerful and infamous monster in the Doom series. As his name suggests, he is a large bull-like Demon with robotic parts, such as a giant gun for a hand. It is a tall, muscular, minotaur-like beast with two dark black/gray horns, a cybernetic right leg, a large rocket launcher mounted on its left arm, red wiring on its lower torso, as well as patches of metal and wires on its right arm.

The Cyberdemon is extremely difficult to defeat, and is known as one of the hardest video game enemies ever. One magazine infamously gave this as a strategy: "To defeat the Cyberdemon, shoot at it until it dies."

He appears in the original Doom as the boss at the end of the second episode, and in Doom II he makes multiple appearances. In Doom 3 as well as Doom RPG, the Cyberdemon is the final boss. He also appears in Wolfenstein RPG, in a fully organic form known as the "Harbinger of Doom". When defeated, his arm and leg (the parts that are robotic in the Doom games) fall off and he says he will return in the future to take revenge on B.J Blazkowicz's descendants, thus implying that Wolfenstein and Doom take place in the same continuity.

A Cyberdemon will let out a loud, feral roar when it is alerted: loud enough to be heard no matter how far away it is. It attacks by firing barrages of three rockets. It has 4000 HP and does not receive splash damage from explosions (BFG's blast damage being the only exception), meaning it has to be hit direct hit, making it more difficult to kill. It is also, contrary to its gargantuan size, among the fastest moving monster in the original game (the lost soul's charge attack not withstanding), and second fastest in Doom II (after the Arch-Vile). When destroyed, the Cyberdemon's mechanical body parts explode, vaporizing the organic parts into reddish clouds of flesh, blood and gore, leaving only his blood-soaked hooves behind; as he explodes, he lets out a short roar that is readily interrupted by the sound of his body exploding.

The Cyberdemon does not have a melee attack in the PC games or Doom 64.

Cyberdemon is the final boss of Doom 3. The gigantic guard of the hell-hole, the Cyberdemon in this game can not be hurt by normal means, and can only be damaged with the Soul Cube. For its attacks, the Cyberdemon can fire powerful rockets and do a instantly killing stomp. There appears to only be one Cyberdemon, as it does not appear in Doom 3: Resurrection of Evil.

The Cyberdemon also has a new appearance in this game, with a minotaur-like build, a cannon for a left arm, and scraps of metal covering its head, back, chest, and legs.

The Cyberdemon makes its return in the 2016 reboot of Doom, appearing as the first boss the player fights. A gigantic demon, the Cyberdemon has pink skin covering its black, armored body. It also has two large horns (with one broken), four eyes, and a large fanged maw of a mouth. Its arms are also loaded with weapons, as the left has its classic rocket launcher with the right has a sharp bony blade/flame thrower. Its first phase of the fight takes place in the Lazarus Labs, with the beast being able to fire rockets, charge up to fire a laser beam, charge forward, and deliver a mighty stomp. After being teleported into Hell by Doomguy ripping out its Argent Cell power core, the Cyberdemon gains the abilities to raise the very earth around it to use as blades and send walls of fire at the player. In Hell, Doomguy kills the beast by breaking off one of its horns, using it as a blade to decapitate it.

Although the Cyberdemon is absent, the Tyrant is a newly introduced enemy that is both resembles the Cyberdemon through appearance and attack method. 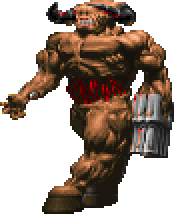 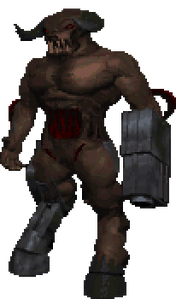 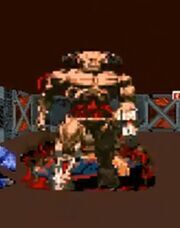 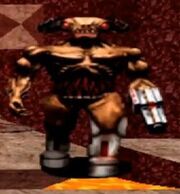 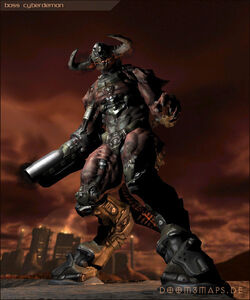 The Cyberdemon in Doom 3. 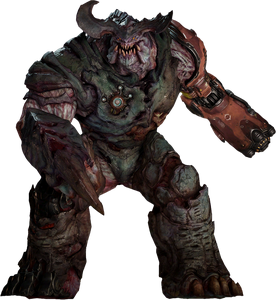 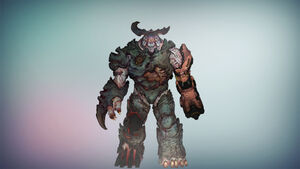 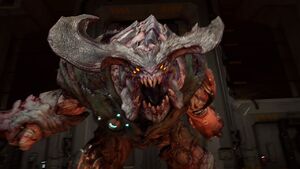 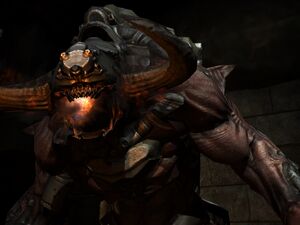 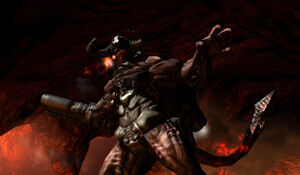 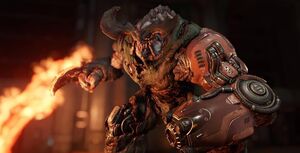 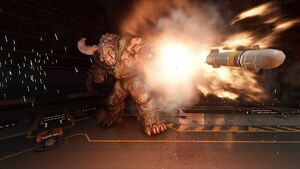 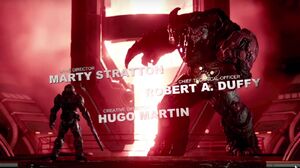