Sebastian Khan, better known as Cyberface, is major villain the Image comics series Savage Dragon. He served as the one of main villains of the series alongside Overlord and Damien Darklord as Savage Dragon's archenimies.

With the success of the original armour, Khan remain within his suit or face certain death from the freaks he has subdued and recruited into his new organization, the Vicious Circle .

Gathering a number of other superpowered criminals, CyberFace formed the Annihilators and prepared them to seize control of the Vicious Circle. Unfortunately for him, the Chicago Police Department’s Freak Force program interfered and apprehended him, as well as trapping the Annihilators in a dimensional limbo.

While the villain was partially began to degenerate and was saved from death by Abner Cadaver, who infused him with the life essences of some of the Undead. This lifeforce was very unstable, and when CyberFace attempted to conquer Chicago in light of the Martian invasion, he was destroyed by a single punch from the Dragon.

Octopus, OpenFace and PowerHouse revived CyberFace in the gorilla body of BrainiApe, and he stole the OverLord armour from the government as part of a bid to reclaim the Vicious Circle, now under the leadership of Horde. In a mass battle which killed Horde, the remains of CyberFace were finally destroyed by BrainiApe.

Only one person has had the audacity to truly oppose CyberFace, and that is Dragon. He carried out a failed assassination attempt which has earned him the unenviable position of being public enemy number one with a huge bounty on his head. In May 1999, our Dragon’s mind took control of his alternate timeline’s body and he has begun his own quest to depose CyberFace from power.

Dragon neutralizing his powers. This  leaving him locked away in case his incredible abilities are needed to save the Earth in the future. He could still access remote units under his control such as Wally who shot the villain dead rather than turn into his loyal slave. 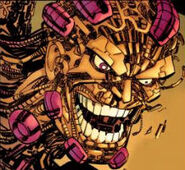 Cyberface's evil grin
Add a photo to this gallery

CyberFace has immense electro-magnetic abilities that allow him to effortlessly manipulate huge amounts of technology. He also possesses great strength and invulnerability.

Cyberface was the second primary villain in the Savage Dragon series. The first being Overlord and the third was Damien Darklord.

Retrieved from "https://villains.fandom.com/wiki/Cyberface?oldid=3398169"
Community content is available under CC-BY-SA unless otherwise noted.