Victor Stone, also known as Cyborg, is a twisted alternate version of the heroic main-universe Cyborg and a major antagonist of the Injustice series. He is also set to appear in the animated film adaptation simply titled Injustice.

He is one of many superheroes who have joined Superman's Regime and, along with Nightwing, is shown to be one of the more fanatically dedicated members due to the presumable loss of his friends who were also involved in the Joker's Metropolis nuclear bombing, Starfire and Beast Boy.

He was voiced by Khary Payton, who also voiced Doomsday in the same franchise.

Victor 'Vic' Stone was a polar opposite from his father. While Silas Stone was a very proficient scientist at S.T.A.R Labs, his son was equally proficient in athletics, being the best football player in his college team. However, when Darkseid of Apokolips would commence his invasion on Earth, Vic would be seriously injured during the chaos.

In a last ditch effort, Silas used unknown technology (a Mother Box from the Fourth World) to save Vic's life, thus giving him a cybernetic support system and built-in computer. Upon learning of Apokolips' existence, Vic joins the rest of the Justice League in the fight to push back Darkseid. As they were successful, Cyborg would go on to become one of their most faithful members.

Cyborg first appears alongside fellow Titan Raven torturing a captured Deathstroke. Cyborg mentions that Deathstroke has been offered "amnesty" by Superman and that he would be wise to take it, also noting that if Cyborg were in charge he would not show the same leniency. Cyborg also reveals that most of the Titans (such as Starfire and Beast Boy) died when Metropolis was nuked, and though Deathstroke was uninvolved, Cyborg is content to punish him anyway due to his being "on the wrong side of the law". Green Lantern steps in and after beating Raven demands answers from Cyborg, who refuses to give them to him. Cyborg attacks Green Lantern and is defeated as well.

He is shown in a prequel chapter on attacking Batman and Damian (when he was Robin) from reaching Superman, but was defeated by Batman.

In the present during Brainiac’s invasion, many people have no choice to have Superman released in time for this crisis, with the remaining Regime including Supergirl attempt to free Damian, Cyborg and Superman, until Batman himself also have no choice to release Superman.

He and Cyborg are tasked to reactivate Brother Eye from Brainiac’s control, with a little interference by Poison Ivy and Brainiac’s own cyborg, Cyborg’s evil doppelgänger known as Grid, while also rescue Harley Quinn from Ivy’s control.

If Absolute Power ending occurs, it will set the comic event known as Injustice vs. Masters of the Universe, where Cyborg finally realize what he’s been doing for Superman and defect to a reawakened Insurgency led by the a new Batman who is none other than Damian, allied with He-Man’s army against both Superman and Skeletor.

Due to the presumable lost of his friends Starfire and Beast Boy, Regime Cyborg was shown to be much more brutal, callous, and militant than his counterpart, being fine with torturing Deathstroke simply because he "was on the wrong side of the law", though also possibly to get some payback on him for his previous transgressions against the Titans. Cyborg's mentioning that most of the other Titans died in Metropolis suggests that that was his reason for embracing Superman's Regime. Regime Cyborg was shown to be contemptuous of his counterpart, who he believed was "playing for the wrong team".

Unfortunately, at time of the betrayal of Shazam (who was executed by Superman and happens to be a child in an adult body) and The Flash, along with Hal Jordan’s surrender, Cyborg starting to doubt if he’s in the wrong team or not, as he felt something uncomfortable of Superman recruiting the villains into his ranks like Sinestro, Black Adam, Bane, .etc, even threatening or/and murdering innocent bystanders who witnessed how tyrannical the Kryptonian has become. On the other hand, Victor shows that he is still pretty ruthless in his own right as he purposely made insenstive remarks about Brainiac killing Green Arrow and Black Carnary to spite Harley. That said, his anger towards her is justified given her role in the destruction of Metropolis. 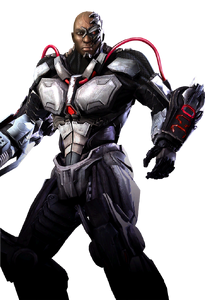