Rogue Military Weapon
The Cyborg Bear is a recurring antagonist of the Disney XD series Milo Murphy's Law, serving as the main antagonist of the episodes "Now I Am a Murphy" and "The Mid-Afternoon Snack Club".

He is a grizzly bear, who was tranquilized and mechanically modified by government agents (led by Colonel Niblet) to become a deadly cyborg bear. He was intended to be used as a military weapon but due to the bear having a mind of its own, it went rogue and became a highly unstable and dangerous villain.

Now I Am a Murphy

The Cyborg Bear started out as a normal grizzly bear cub who was tranquilized by several government agents led by Tiblet and his right-hand man Lieutenant Tennant. The agents implanted the bear with cybernetic armor so that he can serve tasks for them, but they made a terrible mistake programming him into killing any man in sight as the Cyborg Bear broke out of its cage.

Spotting Milo Murphy going on a camping trip with his father and grandfather, the Cyborg Bear tries to attack them from behind a bush, but he realized too late that he's standing on a small but powerful geyser, which sends him up into the air due to Murphy's Law and make him fall into a sinkhole, much to his distraught.

The Cyborg Bear managed to escape from the sinkhole, but is now bent for revenge against Milo due to Murphy's Law. He eventually hitches a ride in a garbage truck after learning that Milo is in Jefferson County Middle School, where he is serving detention alongside with Melissa, Zack, Bradley, Mort, and Amanda for a Murphy's Law incident. Taking the opportunity, the Cyborg Bear tries to kill Milo, but Murphy's Law caused him to become frozen solid in ice and covered in various objects, much to his dismay. 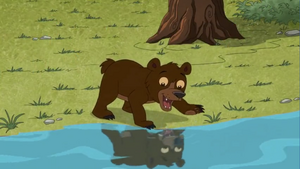 The Cyborg Bear, back when he was a little cub. (before being kidnapped and experimented on) 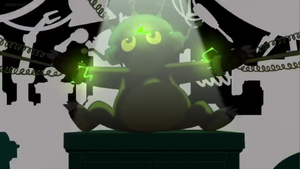 The Bear being experimented on and programmed into a cyborg version of itself. 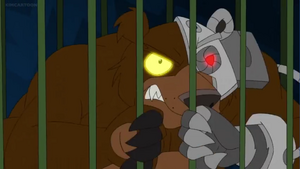 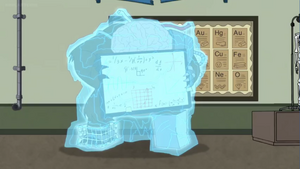 The Cyborg Grizzly after being cryogenically frozen and passed off as an art project.
Add a photo to this gallery

Retrieved from "https://villains.fandom.com/wiki/Cyborg_Bear?oldid=3939781"
Community content is available under CC-BY-SA unless otherwise noted.