Spending time with Terri and his crew.

Obsessing over Superman.
Plotting with Darkseid.

Make Earth believe that he is Superman (partially succeeded)

Hank Henshaw, also known as Cyborg Superman, is a major antagonist in the DC Animated Movie Universe. He is a minor character in The Death of Superman, the main antagonist in Reign of the Supermen, and a mentioned/posthumous antagonist in Batman: Hush.

Hank Henshaw was originally an astronaut who was killed by an asteroid containing Doomsday in space along with his crew and wife, Terri, but was then resurrected and transformed by Darkseid to help take revenge on Superman and conquer the Earth.

He is voiced by Patrick Fabian as Hank Henshaw and Jerry O'Connell as Cyborg Superman.

Hank Henshaw was an astronaut aboard the Excalibur space shuttle with his wife, Terri Henshaw. Henshaw's crew then received a transmission saying that an asteroid containing Doomsday was going to hit the Excalibur space shuttle unless Henshaw and the crew escaped. Henshaw believed that Superman would come to rescue him and his crew from the asteroid, but meteorites from the asteroid begin to hit the shuttle, killing the crew and Terri, leaving only Henshaw left. The asteroid then crashed against the ship, destroying the shuttle and killing Henshaw. Following Superman's death, Cyborg Superman is then seen flying through space towards Earth.

After recovering his remains, Henshaw is later resurrected by Darkseid, and his consciousnesses are transferred into a cyborg body resembling Superman to a degree. Darkseid then brainwashed Henshaw, making him believe that it was Superman's fault that he, Terri, and his crew were killed.

Henshaw then announces to the world during a press conference in the Justice League's honor, his plans for a new Justice League: a Cyber Corps, an organization composed of regular people that are granted superpowers from unknown technology. Lois recognizes the technology as Apokoliptian and questions Luthor's involvement, as he has stolen the technology before. Lois and Luthor see a broadcast from inside Cyborg Superman's mind, revealing Darkseid and his plans to invade, and that he orchestrated the deaths of Henshaw, Superman, and the League in response to the failure of his previous attempt, by using the Justice League Watchtower.

As the Cyber Corps begins to circle the watchtower, Lois heads inside the Watchtower and reveals to Henshaw that she knows who he really is and Henshaw then begins to choke her saying that he must have realized she knew all along after realizing that she and Superman were close. When the Watchtower reveals the real Superman heading towards him, Darkseid takes over Henshaw and begins the invasion by using the Cyber Corps to open a giant boom tube over Metropolis. Henshaw then betrays Darkseid and closes the boom tube, stopping the invasion so he can personally kill Superman. He orders the Cyber Corps to attack Metropolis just as Superman arrives. Superman struggles to fight Henshaw as he isn't at full strength while the latter reveals he blames Superman for not saving his wife from the Excalibur destruction caused by Doomsday. Henshaw then launches the Watchtower into orbit to prevent the returned Justice League from aiding Superman and Lois. With Superman nearly defeated, Lois opens the Watchtower's window shutters so the sun's yellow rays shine on Superman while getting blasted at by Henshaw. Superman then returns to full power and blasts off Henshaw's Cybernetic arm but regenerates it. Superman is then forced to stab Henshaw in the head with a crystal containing the Eradicator, which destroys Henshaw's consciousness and kills Henshaw for good. With Henshaw dead, the battle ends when the drones of the Cyber Corps are deactivated, although all of the people who were turned into drones die in the process. 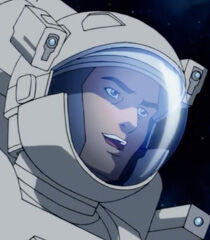 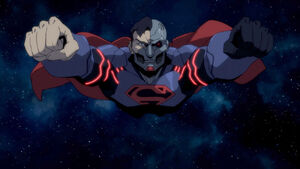 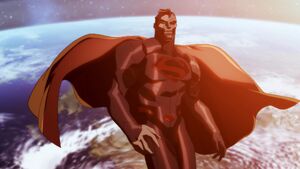 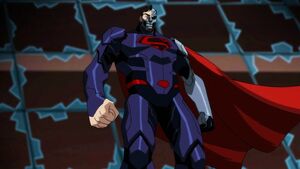 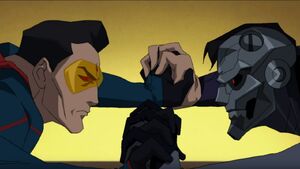 Cyborg Superman vs The Eradicator 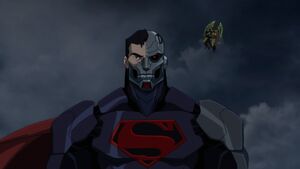 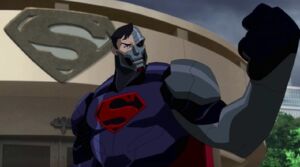 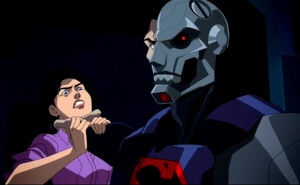 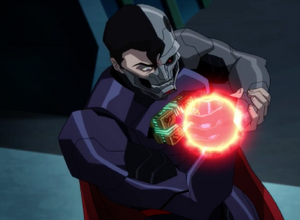 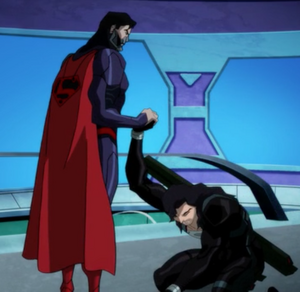 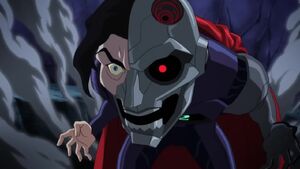 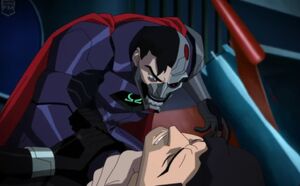 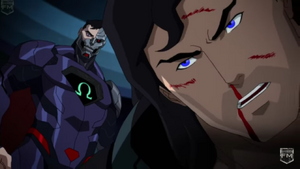 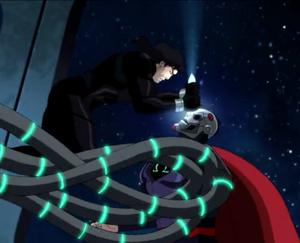 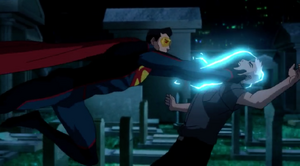 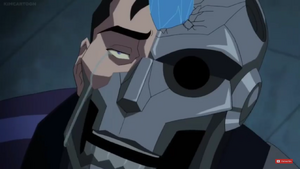 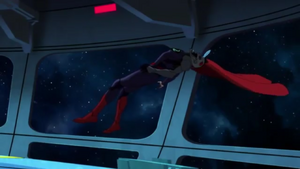 Cyborg Superman's floating corpse
Add a photo to this gallery

Retrieved from "https://villains.fandom.com/wiki/Cyborg_Superman_(DC_Animated_Movie_Universe)?oldid=3888685"
Community content is available under CC-BY-SA unless otherwise noted.