Terroristic Right-Hand
Cyclonus is a high-ranking member of the Decepticons and major antagonist in the Transformers franchise. Most incarnations portray him as turning into a purple Cybertronian Starfighter, and forming the torso of the combiner Galvatronus, though only this latter trait is only seen with Generation 1.

The tech spec from the box art of his G1 toy states he is a Decepticon air warrior and saboteur. Cyclonus has nuclear-powered turbine engines that can propel him at speeds of mach 2 and carries an oxidating laser that fuses an enemy robot's internal mechanisms. It makes no reference to the concept that he was built from another Decepticon by Unicron (as is his usual portrayal in fiction) because at the time of release, this would have been considered a spoiler to the movie.

In the movie and for the majority of the third season, Cyclonus was voiced by actor Roger C. Carmel, who frequently displayed an inability to maintain consistency with the character's voice, noticeably rising and dropping in pitch and tone from episode to episode. When Carmel died towards the end of the series, Jack Angel took over the role of Cyclonus for the final five episodes of the series.

In 2005, following an abortive attack on Autobot City, the Decepticons let go of excess mass from their craft to make it back to their homeworld of Cybertron. This meant jettisoning the injured and dying Decepticons on board, including the Decepticons' leader, Megatron, into the void of space. However, their bodies were recovered by the world-eater Unicron who rebuilt them as deadly new warriors in the service of the newly recreated Megatron, now known as Galvatron.

Thus, a dead Decepticon (either Bombshell, Skywarp, or even both in some continuties) was rebuilt as Cyclonus, whose loyalty to Galvatron is so intense it came first before most other emotions and interests in his mind. Immediately following his creation, Cyclonus became Galvatron’s personal ship, transporting his leader to Starscream’s coronation, into the battle in Autobot City, and in pursuit of the Autobots to the Planet of Junk. Cyclonus was also the one who attacked and crippled the shuttle carrying Hot Rod and Kup. After the destruction of Unicron and Galvatron's seeming demise within it, Cyclonus seemingly took charge of the remaining Decepticons.

As 2006 settled in, Cyclonus was captured by a Quintesson scientist for study, along with Ultra Magnus, Wreck-Gar and Marissa Faireborn, but when the entire group was sucked through a black hole into a negative universe, they were forced to work together to escape; Cyclonus and Magnus developed a grudging respect for each other as warriors, but vowed that when they met again on the battlefield, it would be as enemies.

Some time later, outnumbered and fleeing from the Aerialbots, Cyclonus and Scourge took refuge inside a vortex, which transported them to the pacifistic, energy-rich planet of Paradron, which had been settled by Cybertronian refugees. Naturally, the duo immediately overthrew the planet and summoned Galvatron and the other Decepticons there; the plan was ultimately foiled by the Autobots, but at the cost of Paradron itself, which was destroyed.

Cyclonus later had his body possessed by the ghost of the deceased Decepticon air commander, Starscream, and went on to clash with Ultra Magnus again aboard the Autobot records asteroid with the fate of Daniel Witwicky in the balance.

When a group of Decepticons, tired of being beaten and abused by the deranged Galvatron, confronted Cyclonus and demanded that he do something about the situation, Cyclonus was so short on options that he accepted the advice of a Quintesson, and tricked Galvatron into accompanying him to the therapeutic mental institution on planet Torkulon. It pained Cyclonus to see his leader so demented as each attempted therapy met with failure, but when the Torkuli attempted to cure Galvatron by removing the damaged part of his mind, thereby leaving him a vegetable, Cyclonus sprang into action, only to be restrained. Patched into the sentient network of the planet, rather than be cured, Galvatron infected the world itself with his madness and freed himself, destroying the planet and decided to turn his attention back to fighting the Autobots, rather than dwell on Cyclonus's deception.

Despite Galvatron’s mental instability, it is evident that he values Cyclonus above all other Decepticons. For example, to escape the clutches of the Trans-Organic Dweller, Galvatron hurls a couple of Sweeps to the beast, which gives both himself and Cyclonus a chance to escape. Although the Dweller eventually captures Cyclonus, Galvatron turns back for a moment and seems to consider going back to help him. Also interesting to point out is that earlier in this episode Galvatron is seen to be taking his frustrations out on Scourge and the Sweeps while leaving Cyclonus completely unscathed.

Later still, he, along with a group of Autobots and Quintessons, were transported into a region of space cordoned off by the Quintessons, landing on the planet Zamojin, where Cyclonus aided the Quintessons in acquiring Perceptor's Universal Emulator, in order to repair their systems and return to normal space.

When the Hate Plague swept the Universe, Cyclonus was infected and took leadership of the afflicted Decepticons, hunting down Galvatron and tracking him and a group of Autobots into the depths of Chaar and infected scientist Jessica Morgan.

In 2007, Cyclonus participated in the massive Decepticon attack on Autobot City which culminated in the theft of the key to the Plasma Energy Chamber. When the chamber was then opened, the energy released blasted the key and a group of Autobots across the galaxy to the planetNebulos, and Cyclonus and Scourge led a team of Decepticons in pursuit, attacking and capturing several of the Autobots. To battle them, the remaining Autobots joined with a group of Nebulan rebels to become "Headmasters" and bested them in combat. Having learned of this fusion of Transformer and Nebulan, the Hive, the evil ruling council of Nebulos, approached the Decepticons to repeat the process, but Cyclonus argued them down to taking the heads of only the animal-mode Decepticons, and merely the weapons of himself and the others. Consequently, Cyclonus became a Targetmaster as his oxidating laser was converted into an exo-suit for the Hive member Nightstick, giving them enhanced targeting abilities and firepower. Reclaiming the chamber key with their superior powers, the Decepticons headed back to Cybertron aboard the giant robot Scorponok, where Cyclonus attempted to convince the disgusted Galvatron of the benefits of being bonded to the Nebulans. The Autobots soon arrived back on Cybertron and invaded Scorponok, only to be captured by the Decepticons, and almost executed by Cyclonus before being saved by Spike Witwicky and Fortress Maximus. The Decepticons' plan was subsequently thwarted by Spike and the Nebulans, and they were sent spiralling off through space aboard Scorponok by a tendril of plasma energy.

Cyclonus debuted in the Marvel UK exclusive story "Target: 2006", where he, Galvatron and Scourge travelled back to the present day from the events of Transformers: The Movie, displacing Optimus Prime, Prowl and Ratchet into limbo in the process. Cyclonus functioned as Galvatron's lieutenant as he planned to construct a cannon and hide it on the future site of Autobot City, then return to their own time and trigger it, destroying both the Autobots and Unicron. While the trio were more than a match for the present day Autobots, they were eventually tricked by a time-travelling Kup, Hot Rod and Blurr into believing they were in an alternate timeline, and returned to the future.

Following the defeat of Galvatron and Unicron, Cyclonus and Scourge found themselves at a loose end. They were attacked by the bounty hunter Death's Head, who was after a reward for Galvatron. Cyclonus correctly guessed that Galvatron had fled back into Earth's past. He and Scourge objected to being treated as subordinates by new Decepticon commander Shockwave and, when he hired Death's Head to kill Rodimus Prime, they set out to prove they could defeat him themselves. However, their intervention mainly served to stop Death's Head killing his target and then leave them fleeing in panic from his vengeance.

With Rodimus Prime having hired Death's Head himself, Cyclonus and Scourge found themselves on the run from the bounty hunter. They ended up on the planet Junk, where all three of them fell under the influence of Unicron, whose head had ended up on the planet. They returned to Cybertron, where Death's Head killed Shockwave and installed Cyclonus and Scourge as the new Decepticon leaders. As per Unicron's instructions, they led the Decepticons in a mass attack on the Autobots to keep them busy. However, when a group of Autobots made it to Junk anyway, Cyclonus and Scourge abandoned the battle to assist him, only to end up being pushed through a time portal by Death's Head and ending up on Cybertron in the past. This led into their appearance in Marvel US' Headmasters miniseries, where they were among the Decepticons who accompanied Scorponok to Nebulos and were upgraded to Targetmasters.

Heading to Earth, Cyclonus and Scourge first made contact with that era's Shockwave, then met up with Galvatron, who they believed had a trigger device that would return them to their own time. Their confrontation was interrupted by the arrival of the Autobot Wreckers, and Cyclonus and Scourge were tricked by Springer, chasing him away from a human settlement and allowing Galvatron to flee. With nowhere else to go, they returned to Shockwave, but Cyclonus let slip that they would be responsible for his death in the future. Shockwave responded by setting a brainwashed Megatron on them, who killed Cyclonus. His death was the final tipping point to a time rift forming, with it eventually being sealed when Shockwave deposited Cyclonus' body in it.

An alternate version of Cyclonus appeared in Marvel US #67, in a timeline where Unicron had destroyed Cybertron and the Decepticons ruled North America. Preparing to sit out a futile aur strike by the remaining human military, Cyclonus and Scourge ended up battling the Autobots Getaway, Guzzle and Chainclaw. Cyclonus was the last one left standing but had to be saved from Chainclaw by Galvatron...who promptly killed Cyclonus for needing rescuing in the first place, declaring him a weak fool.

Like several Unicron Trilogy characters, this Cyclonus only resembles the original in name only.

An incarnation of Cyclonus exists as a member of the Decepticon's Team Chaar. His backstory is revealed in guidebook The AllSpark Almanac, which reveals he appeared in a storm of light above the Decepticon city of New Kaon. After being rebuilt by Scalpel, he noted that Cyclonus's internal chronometer was off by megacycles, implying he was from the future, and that he was obsessively loyal to a figure called "Galvatron". As well as this, Cyclonus shared "Starscream's 'self preservation' algorithms commented out", heavily implying he was created from Starscream's cowardly clone Skywarp. After coming to, Cyclonus swore loyalty to Megatron, albeit in the abstract.

As seen in Transwarped, Cyclonus and Team Chaar battled their Autobot counterparts, Team Athenia, for control of the Autobot Sapce Bridge to Cybertron. Cyclonus strafed Rodimus before using his twin swords to disable Ironhide and Brawn with the help of Oil Slick. Silently accepting Strika's orders to secure the area, he ignored the stoic defiance of Rodimus, not even watching it get disabled. When the Elite Guard arrived and he was given the order to retreat, he did so without complaint. 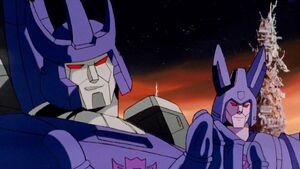