Restore the Decepticon Empire and summon back Megatron. (failed)

He is the leader of the newly restored High Council, which secretly composed of his Decepticons, infiltrating within the Autobot society. Having assumed control of the High Council and forming their alliance with Steeljaw and Soundwave, Cyclonus plots to bring back Megatron by taking over the Cybertronian society, in order to restore the Decepticon Empire and begin a new age of conquest, starting with Earth.

Cyclonus is a Decepticon loyalist who hold immense loyalty towards Megatron. He is manipulative when he and his group of Decepticon posed as the Autobot High Councils to manipulate Autobots to create a powerful portal to summon back Megatron to rebuild the Decepticon Empire even when he freed his ally and communication chief, Soundwave (who also hold the same goal).

In the DS version of War for Cybertron, Cyclonus was a Decepticon who guarded Swoop who had been kiddnapped for their Dark Energon experiments. As the Autobots came to rescue him, Cyclonus confronted them. Standing behind a force field, he unleashed his "minions", some swarms and a few turrets, to attack the Autobots. When those fell and his force field was disabled, Cyclonus cowardly promising to open the door to the laboratory. Once the Autobots had retrieved Swoop, Cyclonus revealed he'd rigged the lab to blow and sped off in his jet mode, activating force fields to keep the Autobots from following him..

After Cybertron was restored, a new High Council was formed to rule the planet, but Cyclonus and his Decepticon cell secretly usurped them, and used Light Benders to pose as Autobots. They secretly plotted to use Decepticon criminal Steeljaw as their servant, and Soundwave as their ally to bring about a new Cybertronian age to summon back Megatron.

Cyclonus would remain hidden until the season finale, Freedom Fighters, where he would finally put his plan of conquering Earth into motion. However, he and his teammates were thwarted when the Bee Team, allied with Steeljaw due to him having had been betrayed by the council, managed to remove their light benders and reveal Cyclonus and his group for who they truly were: Decepticon ursurpers who were plotting their conquest of the universe.

Furious, Cyclonus oredered his team to attack them, but when they were all seemingly overpowered, he assembled himself and his crew into their powerful, combined form: Galvatronus. However, the Bee Team responded by forming their own Combiner, Ultra Bee. The two gesalts then began brutally fighting, until Galvatronus got the upper hand. He began taunting and berating the Autobots that they had foiled all his plans, including the assistance of Steeljaw and their freeing of Soundwave. Galvatronus was about to kill Ultra Bee when one of his componets refused to deliver the killing blow; this allowed the Autobot Combiner to retaliate against Galvatronus and finally defeat the Decepticon. Exhausted, Galvatronus uncombined, his components unconscious, which included Cyclonus.

It is unknown what became of Cyclonus after his defeat, but it can be assumed that he was arrested for his crimes against Cybertron, which included his brainwashing of the Cybertronian populace and his attempt to conquer and invade Earth. 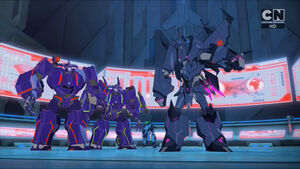 Cyclonus and the High Council. 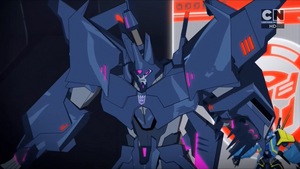 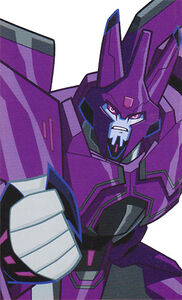 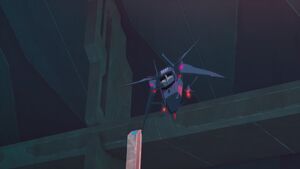 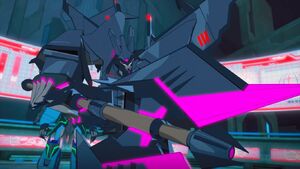 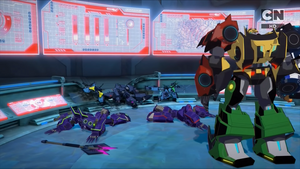 Cyclonus and the High Council is defeated by Ultra Bee.