Leader of the Vulture troop

Kill the most competent rivals

Abuse
Murder and feed on the ones he killed

Cyclop (Cíclope in Spanish language) is one Godfather Egg goons and a supporting antagonist in the mexican movie Un Gallo con Muchos Huevos. Works as one of the Godfather Egg trusted men and secretly helps Chiquis, killing discreetly along with his henchmen the rivals of the Bankivoide.

Being Don Poncho and company able to access to the office of The Godfather Egg, whose thugs were two vultures who looked after him inside the door, one of them was called Cyclops to have an eye with a marked scar on the left. He commands his own group of vultures and all of them they follow his orders that he complies.

Later discovers that he secretly works for the lover of the Bankivoide, Chiquis the peacock, and both carry out strategies that include assassinating the strongest competitors and able to snatch the title of champion to Bankivoide. She sent him to spy on Toto, telling him enough that he trained in the progress of the days to deserve the prize in combat as a winning rooster, thus earning an amount of money to pay the farm's debts. Demanding, Chiquis ordered him to ambush Toto in his own home and kill him, so he had to do it with the help of his accomplices.

So that Toto would run serious danger, costing the life of his mother and loved ones, even in the Pollón Farms the vulture band flew over attacking all the inhabitants who were there, then the rooster Toto would not allow this to happen, fighting at the side of the ducks and a fierce battle would be fought between birds, finding themselves in the deserts of Mexico, avoiding the narrow rock formations. That most of the vultures fell towards the emptiness of the cliffs, deciding to return again to the Palenque.

In the last moments of the film, Chiquis is discovered by the misdeeds that he has committed with the vulture Cyclop, costing him the high rank as leader of his own group.

Cyclop in the cliffs. 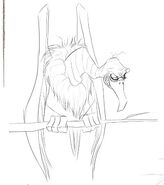 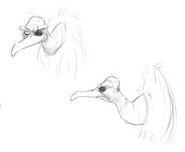 Cyclop profiles concep art
Add a photo to this gallery

Retrieved from "https://villains.fandom.com/wiki/Cyclop_(Little_Rooster%27s_Egg-cellent_Adventure)?oldid=3746074"
Community content is available under CC-BY-SA unless otherwise noted.