Kill any humans trespassing their island (unless they are sent by gods).

The Cyclopes are a group of antagonists in the 2012 film Wrath of the Titans. Despite being allies of Hephaestus, they are aggressive and dangerous creatures who kill any humans coming on their island, unless they are sent by the gods.

During the war between the gods and the Titans, the three Cyclopes helped Hephaestus to forge the Spear of Trium, which was used to defeat Kronos.

The Cyclopes live on the island of Kail and set traps everywhere to hunt the humans who may come. When Hephaestus has been depowered and banished, he went to live on their island.

After Perseus, Agenor, Andromeda and some Argos soldiers arrived on the island of Kail to find Hephaestus, Agenor gets trapped in a cage, which is then pulled into the woods. Perseus tries to follow him, but one of the Cyclops confronts him and throws a trunk at him before pursuing him. They pass near Andromeda, who sends two soldiers to help Perseus and orders the archers to shoot the Cyclops, however a second Cyclops comes and attack them. He first kills two of the soldiers, then he goes after Andromeda and a soldier named Korrina who hide behind a mound of earth.

Meanwhile, the first Cyclops chases Perseus and destroys every trees in its path. Perseus discovers a trap and decides to lure the Cyclops, who quickly arrives and tries to crush him, but he impales his hand on Perseus's sword. The second Cyclops eventually finds Andromeda and Korrina and attack them, however he hears his brother screaming in pain and decides to go to help him. The two soldiers sent by Andromeda throws ropes at the first Cyclops to subdue him, but he manages to break free and falls down. Perseus takes the opportunity to activate the trap and a huge trunk hits the Cyclops while he got up, knocking him out. Then, Perseus climbs over his body and asks him where Agenor is. The other Cyclops comes and Perseus unsheathes Poseidon's Trident, however the Elder Cyclops arrives before they fight, carrying Agenor. Recognizing the god's weapon, he kneels down and orders the other Cyclops to do the same.

Shortly after, the three Cyclops lead Perseus and the others to Hephaestus's lair. 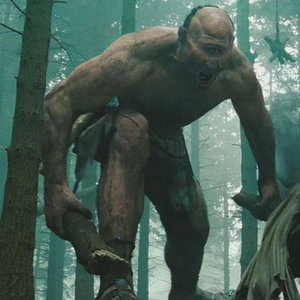 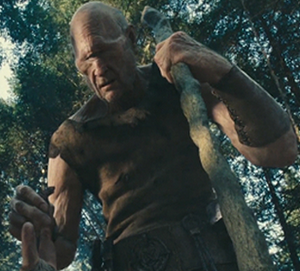 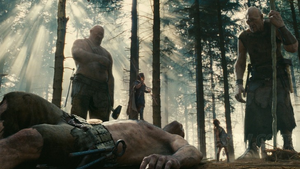 The three Cyclopes.
Add a photo to this gallery
Retrieved from "https://villains.fandom.com/wiki/Cyclopes_(Wrath_of_the_Titans)?oldid=3771198"
Community content is available under CC-BY-SA unless otherwise noted.