Cyclops is one of the three secondary antagonists (alongside Alucard and Hanzou) of Pico's School. A punk with a pink mohawk and black eyepatch (hence the name), he is one of Casandra's minions.

Cyclops has a pink mohawk, a single pink eye, and an eyepatch. He wears a black leather jacket, a white shirt, and grey shoes with gold swastikas.

In Pico 2, Cyclops was planned to be a zombie and ripped clothers, no eyes, Pink hair that goes up, and almost the top half of his face is missing and teeth are crooked and yellow.

Cyclops' design in Pico's School: Love Conquers All is relatively the same due to his old one, minus the swastikas on his shows.

Cyclops is a person who follows a stereotypical punk image/ or a trend changer, and, at least in his original appearances, has xenophobic beliefs. In Pico's School: Love Conquers All, Cyclops is an affable character who simply desires friendship, although it is unknown if this also applies to his canon version as well.

Cyclops could be found in the hallways guarding them when encountered, shooting at Pico if he doesn't have a weapon. Once Pico has a gun, he is able to to shoot/disharm Cyclops by shooting his gun, leaving him unarmed. When Cyclops is unarmed, he begs for his life and Pico has a choice of killing me of letting him go.

If the player/Pico spares his life, Cyclops runs away and is not seen even again in the game, as/even though the school doors are locked, is unknown where he went or what happen to him.

If the player/Pico does not spare his life, Cyclops pees himself right before Pico kills him down. The dead body can also be shot again, winning you the BRUTAL medal to have.

In Pico Roulette, Cyclops is a playable character.

In the cancelled Pico 2, Cyclops was revealed to have died in the last game, and have since become a zombie.

In Pico's School: Love Conquers All, Cyclops would be guarding the hallways. Before trying to shoot him, Pico talks to him about Green Day. He gets confused if Pico is mocking him because of his interest but Pico tells him that he actually likes punk pock. Pico convinces him that it isn't punk rock by shooting up the school or his classmates, and reminds that he is a good person inside. Knowing that he helped Pico when he pick up his books when he tripped as proof, they make a agreement that Cyclops will have to dye his hair orange and Pico will wear a eye patch. Feeing remorseful and guilty, Cyclops then goes home. 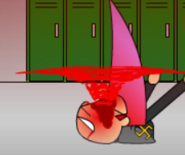