Stranger
Bigger Boot (after he smashes Dennis; by Patrick)
The Diver

Collecting sea creatures to use in his knick-knacks.

Sell knick-knacks made of dead sea creatures at his shop (succeeded until SpongeBob and Patrick revived the sea creatures and that later beaten him up for his deeds).

The Cyclops is a major antagonist in Nickelodeon's eleventh feature film The SpongeBob SquarePants Movie.

He was voiced by Neil Ross (who also played Grandfather in Operation: Z.E.R.O., Colonel Volgin in Metal Gear Solid 3: Snake Eater, Norman Osborn/Green Goblin in Spider-Man: The Animated Series and the Mad Bomber in the Spider-Man 3 video game adaptations) while he was physically portrayed by Aaron Hendry (who also played The Nogitsune in MTV's Teen Wolf).

The Cyclops never takes off his scuba gear, even on land; possibly because he is too excited and hyperactive about selling knick-knacks or to scare sea creatures for fun. The anonymous, indefinite, and pseudonymous diver owns and works at the dreaded Shell City and is feared by all inhabitants of the sea, mainly because he looks extremely frightening and antipathetic, is gigantic compared to marine animals, captures them, and dries them out under a constantly burning desk lamp in Shell City to dry them out and turn them into "smelly knick-knacks", that he can sell (as seen in the film). He is shown to be quite sadistic, as he laughs while menacing SpongeBob and Patrick.

Everybody first learn of the Cyclops' existence in the beginning of the film when Mindy first mentioned him while she was warning our protagonists about the hazards of venturing out to Shell City, where King Neptune's crown is being withheld. The Cyclops was said to guard Shell City and was described as giant when Mindy classified him as the worst of the most risky and dangerous hazards.

Later in the film, just when Dennis and his spiked, "big boot", was about to step on SpongeBob and Patrick, anyone finally sees the mysterious and heinous diver appear, more specifically, his "bigger boot" (as SpongeBob and Patrick call it), step on Dennis in an ironic, burlesque, and entertaining fashion, saving our duo from Dennis (at the moment), but unfortunately not from the Cyclops himself.

Patrick was just about to make a run for it screaming "Bigger boot!", when SpongeBob notified him that the hardhat diver's benefactor of a boot had saved their lives. They displayed gratitude towards the detrimental and pernicious diver for saving them from Dennis, referring to the Cyclops originally as, "Stranger", for not knowing the Cyclops' true identity at the time. But the Cyclops just stood there, looking for his next victims. Then fear and realization struck SpongeBob and Patrick when the Cyclops looked directly down at them (most likely because he finally heard SpongeBob when he said, "Uhh... Stranger?"), hands ready to grab.

SpongeBob and Patrick then discovered that this abnormally large, "Stranger", who rescued them from the evil Dennis, was the even more monstrous and giant Cyclops who guards Shell City mentioned in Princess Mindy's warning. SpongeBob and Patrick tried to run away, but with the diver's boots clomping down behind them, failed, and the Cyclops picked them up, gave them a long stare, and proceeded onward, kidnapping them to the surface. Our duo (who recently fainted) were stuffed in a bag, and driven to Shell City in the Cyclops' boat (as shown in script). The Cyclops then put SpongeBob and Patrick in his glass bowl, and held them captive in Shell City.

First, he decided to scare our two heroes for entertainment, so he snuck up behind them, stalked them a bit, exaggerated his breathing, and when SpongeBob and Patrick turned around, he scared the two and laughed evilly. He then got over it took out a small toolbox SpongeBob referred to as his, "evil instruments of torture".

He then took glue and google eyes out, and answered SpongeBob's question about what his business was with them in front of the duo's glass bowl by making a humorous diorama of "Alexander Clam Bell", out of a dead clam, a play hat, a small rotary phone, and the craft tools he took out of his toolbox while happily humming to show them what he does to sea creatures and that they were next to be transformed into knick-knacks.

Once he had done these two things, he grabbed SpongeBob and Patrick out of the fish bowl and placed them under the desk lamp so they would dry up and die so he could turn them into smelly knick-knacks and sell them for sale. The Cyclops then grabbed a book, and went into a restroom. Before their deaths, our heroes both shed a single tear which later rolled down the heat lamp's wire and shorted out a power outlet that smoked up causing the fire sprinklers in his shop to set off, much to the disappointment, sadness, and later a relief of excitement from the pirates who have been watching the movie in the theater.

Once the two were revived and proceeded to lift Neptune's crown, you see the Cyclops picking it up and giving SpongeBob and Patrick a growl before the sea creatures the Cyclops had killed were also revived and began to beat him up as revenge after being squirted in the face with glue. During the scene where the two ride David Hasselhoff, the Cyclops' "bigger boot" emerged from the water with Dennis on the boot's ratel. It is unknown what became of the Cyclopes after the events of the film following his defeat, but he most likely got injured or got his suit torn up from the aftermath of the scuffle.

The Cyclops is giant and wears worn down, standard, vintage hardhat diving dress consisting of this: 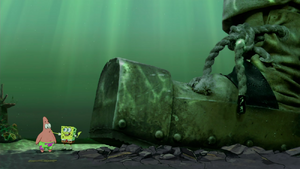 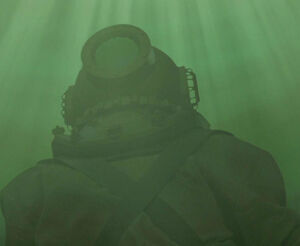 The Cyclops making his first appearance. 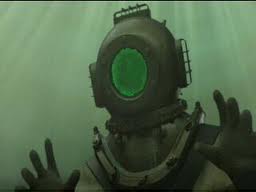 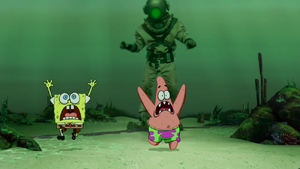 SpongeBob and Patrick running away from the Cyclops. 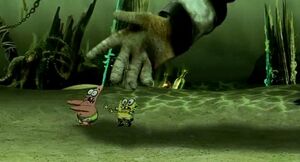 The Cyclops grabs SpongeBob and Patrick, taking them to his shop. 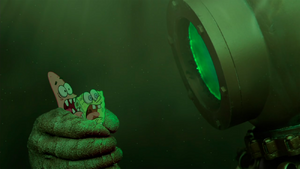 SpongeBob and Patrick scream in horror as the cyclops holds them. 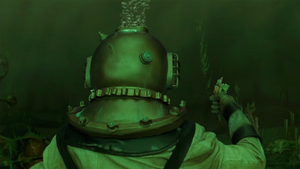 The Cyclops take Spongebob and Patrick away. 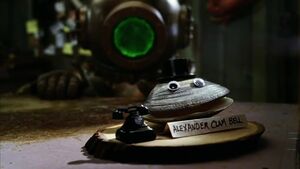 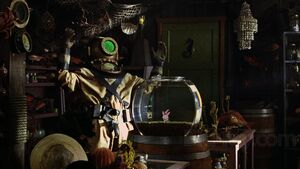 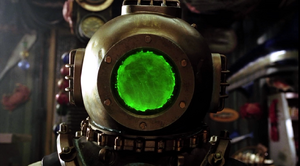 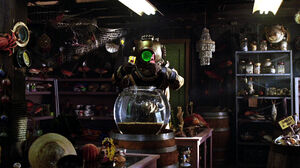 The Cyclops takes Spongebob and Patrick out of the tank. 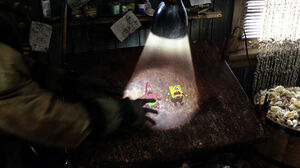 The Cyclops frying SpongeBob and Patrick under his lamp. 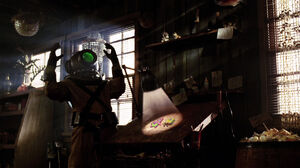 The Cyclops' other evil laugh. 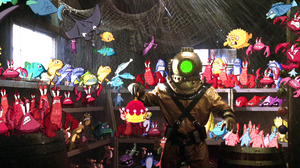 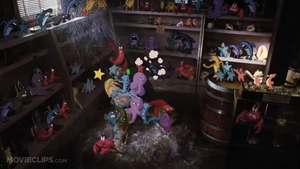 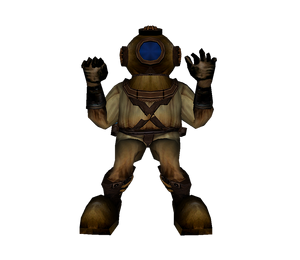 The Cyclops' model in the console of The SpongeBob SquarePants Movie video game. 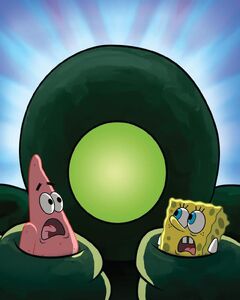 As he appears in Road Trip in 3-D! 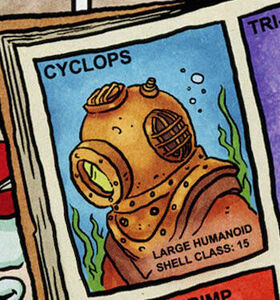 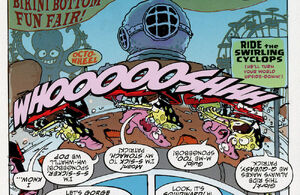