Set up a lab and cook crystal meth (succeeded).

Get out of the country, and retreat to an island somewhere (failed).
Kill John Crenshaw (failed).

Cylus Alkinson is the main antagonist of the 2016 horror film The Horde.

He was portrayed by Costas Mandylor.

Cylus was serving three consecutive life sentences for murder three years prior to the events of The Horde. Anyway, he was being transported to a maximum security prison with twelve other inmates when their bus slid off the road during a rainstorm. Everyone died except for Wilson, Stone, and Cylus. They dressed the bodies in their clothes, then burnt the bus. Due to the burning of the bus, everyone believes they're dead.

When Cyrus came upon a certain location he figured what a perfect opportunity to set up a lab, cook enough crystal, and stockpile as much cash as they could to get out of the country, and go live on some island.

After John tells Hailey, and Selina to go get into the car, start it up, and lock it Cylus musters out "Oh, f--k." Then John proceeds to handcuff him to the bar stand, and pour a bottle of Montalvo all over the bar while saying, "For everyone you murdered...Chris...Sheila, Derrick...Riley. I knew you weren't smart enough to do this by yourself, that's why I wanted to get all of the players in one spot. Never threaten my family you piece of s--t."

Cylus asks, "You think this is over?" Then John tells him to remember their names. Cylus screams "No" while John walks out of the bar, still pouring achohol with each step to the car. Once John gets inside the car Selina asks him what he did to him. He replies, "I gave him what he deserved." Then he ignites his lighter, and drops it onto the achohol. Fire traces the substance's trail to the bar, burning Cylus in the process. John begins to drive away as the building explodes.

"I was wondering when you were gonna wake up. I must've hit you harder than I thought."

"If John is that rather intense individual who killed my men, he's dead."

"You couple radiation with a whole lot of inbreeding, and you get the best mutated watch dogs anyone could ask for. Especially now that they've aquired a taste for human flesh."

"Will you come with me?"

"Watch her. If she moves, kill the bitch."

"Your little fire stunt costs us four months of work."

"Of course they will, you idiot."

"I want to peel the skin off his body on front of his woman and I want to hear him scream! And I'm gonna cut his fucking heart out, and feed it to the one who brings him to me."

"Well, I guess you heard your boyfriend is still alive. Don't get too excited. My men are gonna hunt him down, bring him here, and they're gonna chop him up while I fuck you in front of him."

"You watch to many movies."

"You think this is over?" 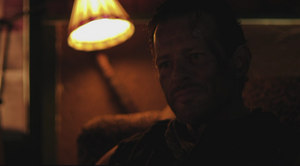 Cylus about to tell Seline about himself. 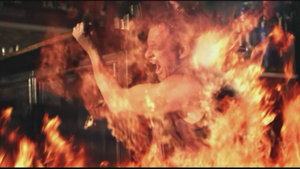 Cylus on fire.]]
Add a photo to this gallery
Retrieved from "https://villains.fandom.com/wiki/Cylus_Atkinson?oldid=3852024"
Community content is available under CC-BY-SA unless otherwise noted.