NOTE: This article is only about her role in A New Beginning, as she isn't a villain in The Eternal Night nor Dawn of the Dragon. For her role in the latter two games, click here.

The Legend of Spyro: A New Beginning

Searching for the final key to her master's prison (both formerly).

The Legend of Spyro: A New Beginning

The black dragon named Cynder is the main enemy in the game. The story reveals that she led Malefor's army of Apes in a war against the dragon race. When the Dragons seemed to be nearing victory in the war, Cynder appeared and one by one captured the Guardian dragons, but the last Guardian named Ignitus escaped. Over time, the Dragons lost the war against the Dark Armies. Cynder steadily hunted down and killed any dragon she came across, after taking control over the surrounding islands and realms and put them under her iron rule, all the while still searching for Ignitus.

One day, while looking for Ignitus, she receives news that a purple dragon named Spyro was spotted in the swamp. Spyro could hear Cynder roar while looking for him, but he ran away before she could see him. Cynder's first onscreen appearance was when Spyro was traveling through Dante's Freezer, she was seen from afar, leaving the island. Volteer, the electric Guardian, revealed that she had drained his powers, and left with a glowing crystal. She was later spotted leaving Tall Plains, again leaving with a crystal fueled by Cyril's powers.

Ignitus figures out that Cynder is draining the Guardian's powers to unlock the portal that leads to Malefor's prison so she can free him. Moments after Spyro frees Terrador at Munitions Forge, Cynder appears to pick up the crystal fueled with the Guardian's energy and effortlessly defeats the exhausted dragon. She then notices Spyro, and immediately pursues him relentlessly through Munition's Forge as the volcano Boyzitbig erupts. As Cynder was about to catch Spyro, she is attacked by Ignitus, who intervened to allow Spyro to escape, only to be overpowered and taken to the evil dragon's lair, Concurrent Skies, where Cynder began the process of draining the Fire Guardian's energy into a crystal.

After learning how to utilize Earth and overcome his fear of Cynder, Spyro ventures to her fortress to rescue Ignitus. Cynder soon became aware of Spyro's presence within her fortress and waits for the young dragon at the very peak of her lair where Ignitus was being held, stopping Spyro from destroying the crystal before engaging him in battle. After a brief fight, the evil dragon knocks away the purple dragon, revealing that she was holding back, and escaped to Convexity with the crystal after it was fully charged with Ignitus's elemental energy.

As she leaves, Spyro tells a weakened Ignitus, exhausted from getting his energy drained, that something about Cynder's eyes felt familiar. The elder dragon reveals that Cynder was born in the same clutch of eggs that Spyro was in, making her the same age as Spyro. Malefor needs a Dragon born in the Year of the dragon to free him, so her egg was stolen by a servant of Malefor, the Ape King Gaul, and Cynder was corrupted by Malefor's poisonous powers, which transformed her into a monstrous and horrific adult dragon brainwashed to do the Dark Master's bidding.

Spyro realizes that Cynder is not truly evil; she is just another victim of the Dark Master, so he becomes determined to stop both her and Malefor and follows after Cynder into Convexity where the Dark Master's prison was held. The young dragon arrives too late to stop Cynder, as she had already triggered the portal and provided Malefor with a means of escape. Once she sees Spyro, Cynder engages him in a battle once more, declaring that she will show no mercy this time and was determined to get rid of the purple dragon once and for all.

They begin a fierce battle, during which Spyro takes the upper hand. Cynder, weakened and desperate to win, use as a Shadow Fire attack against Spyro. Rather than damaging him, however, the attack unlocks Spyro's Light Aether breath. Using it, Spyro defeats Cynder with a powerful Light Aether Fury which ultimately defeats her. The power of the Aether Fury had a side effect which frees Cynder from Malefor's control, returning her to her normal size of a young dragon, but she still exhausted from her battle. However, the gateway to Convexity starts to fall apart after Spyro and Cynder's fight. Despite a difference of opinion between Spyro and Sparx, Spyro rescues Cynder and flees from Convexity, making a narrow escape.

Cynder is returned to the Dragon Temple, where the four Guardians apologize to her for having failed to protect her egg and welcome her to the temple. That night, Spyro goes to the temple's balcony, looking for any sign of Malefor's return, and Cynder soon joins him, as they both feared that Malefor was not defeated yet.

The Legend of Spyro: The Eternal Night

The Legend of Spyro: Dawn of the Dragon

While under Malefor's control, Cynder was the classic femme fatale; unstable, alternately calm, but explosive, caring about nothing but the return of her master. She was rather malevolent, arrogant and cruel, underestimating Spyro due to his small size.

After being freed from the Dark Master's influence, she becomes guilty for all of the evil things that she had done and strives to find her own destiny and help fight against her former master. In Dawn of the Dragon, she is revealed to be strong, authentic, independent and assertive, as she dislikes being a "damsel in distress". She is determined to prove that she is no longer evil, with her jewelry acting as a way to show that she is not afraid of Malefor anymore. Despite that, she was still afraid of him to a certain level, as Malefor quickly made her feel suspicious, doubtful and guilty, and which allowed him to easily corrupt her again.

After being freed from Malefor, she develops a small friendship with Spyro. As they spent more time together, she slowly begins to warm up to the purple dragon, realizing that he truly cares about her, and eventually their friendship evolves into developing feelings for each other. Cynder's feelings for Spyro become strong enough for her to resist Malefor's corruption upon realizing that he returned her feelings, and just before they were seemingly going to die at the world's core, she admitted loving him.

In A New Beginning, Cynder was controlled by Malefor, making her his puppet. Due to her exposure to his dark energies, she was an adult-sized dragon in spite of her age and was endowed with several unnatural powers. Namely, she had control over Poison, Fear, Wind, and Shadow, although this was not shown until Dawn of the Dragon. She also possessed the ability to breathe fire (although hers had a darker color than usual) and Convexity. She also had enough strength to best a Guardian Dragon, shown when she managed to defeat and capture Ignitus.

In The Legend of Spyro: Dawn of the Dragon, it is revealed she was given abilities that are unnatural amongst other dragons due to being exposed to Malefor's corruption. She was given control over Poison, Fear, Wind, and Shadow, and she could still use the Aether breath. However, she lost the ability to breathe Shadow Fire, after she was defeated by Spyro.

She also has a blade on the tip of her tail which she can sometimes slash her enemies with. Like Spyro, she also attacks with her claws and horns. Like all dragons, she is also able to fly. 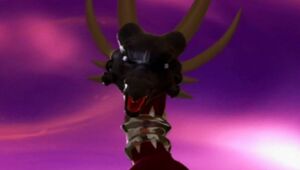 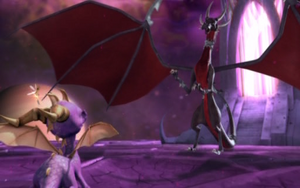 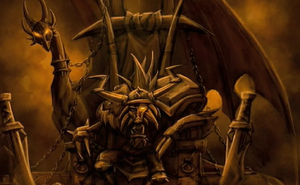 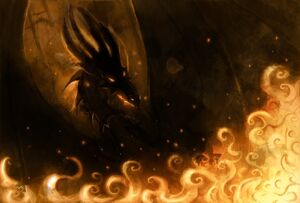