Cyrax is a Lin Kuei warrior transformed into a cyborg from the Mortal Kombat series of fighting games. While under the Cyber Lin Kuei's control, Cyrax serves as an antagonist, unless his free will is restored.

Making his debut in Mortal Kombat 3, Cyrax was a former human who was converted into a cybernetic ninja by the Lin Kuei, in an effort to convert all members into unfeeling, cold-hearted, cybernetic assassins to improve their performance. He was assigned to hunt down the renegade, former Lin Kuei member Sub-Zero as designated unit LK-4D4, alongside Sektor and Smoke. When Shao Kahn and his forces invaded Earthrealm during their search, the Cyber Lin Kuei allied with him.

Sub-Zero defeated Cyrax and reprogrammed him with orders to destroy Shao Kahn. However, Kahn was defeated by the other Earthrealm warriors before Cyrax had a chance to do so. As a result of his reprogramming, he awaited new orders. When these never came, he malfunctioned and wandered until becoming mired in the middle of the Desert.

Cyrax was later recovered by the Cyber Lin Kuei and his original programming was restored. Once again the clan sent Cyrax into battle with his fellow cyborg Sektor assigned to monitor him. However, during the events of Shinnok's return, Cyrax's human memories began to return to him in flashbacks. Afterwards, Jax Briggs and Sonya Blade retored his humanity via technology from the Outer World Investigation Agency. The grateful Cyrax joined the Agency, abandoning his cybernetic actions.

In the rebooted timeline of MK 2011, the human Cyrax tried to leave the Lin Kuei when he felt they were going down a dark path via the Cyber Initiative. However, he was captured after his battle with Sektor and converted. He later confronted Kuai Liang in the Soul Chamber and tried to take him to the Temple for conversion. The new Sub Zero pitied what happened to him, but managed to defeat him regardless. Later, Cyrax and Sektor, along with a squad of Cyber Lin Kuei, managed to capture Sub Zero during the Tournament. They requested to take him to the Temple to Shao Kahn, with Cyrax offering the Lin Kuei's loyalty in exchange.

After the tournament, Cyrax and Sektor were seen as part of Shao Kahn's court. During the invasion of Earthrealm Cyrax was seen with the rest of the Outworld forces receiving orders from Sektor, when the recently reprogrammed Cyber Sub-Zero appeared through the portal. He leaves with Noob Saibot. Later when the Earthrealm warriors gathered at the temple, the Cyber Lin Kuei attacked them. Nightwolf faced and defeated Cyrax, who was not seen again following Sindel's attack.

In the comic prequel of MKX, Cyrax and most of other living cybernized Lin Kuei are freed from Sektor's control by a now full-fleshed and revived Sub-Zero via stolen USB virus given from Kung Jin, and help Sub-Zero kill Sektor for good. As the cybernized Lin Kuei warriors bows to Cyrax as their new master due to being one of the master programmer besides Sektor however, Cyrax felt that Lin Kuei needs their human's touch from their flesh and heart back, thus entrusting Sub-Zero to led it without Cyrax, as Cyrax sacrifice his life to destroy every traces of the Cyber Lin Kuei including himself by activating the self-destruct sequence on the cybernized Lin Kuei's lair.

By the time Kronika performed a time merger between past and future in MK11, Cyrax is among the time-displaced warriors. With the help of Sub-Zero's former disciple turned Sektor's successor, a cyberized Frost, and their old Lin Kuei ally and former Sub-Zero, Noob Saibot (who survived the Soulnado and recovering for 21 years), Cyrax and Sektor kidnaps Sub-Zero's Lin Kuei clansman into their Cyber Lin Kuei troops, prompting the older Scorpion (now goes by his real name, Grandmaster Hanzo Hazashi) to join Sub-Zero quickly on shutting down new Cyber Lin Kuei factory to make sure Sektor (who revealed to have sold his clan to Quan Chi and start the fire on the first Shirai-Ryu) never threaten Shirai-Ryu second time again. After being freed and before his sacrifice like his late-future-self, it is explained how Cyrax turned into a cyborg by Sektor, having his heart ripped by the latter before being automated off-screen.

Cyrax briefly appears in Mortal Kombat: Annihilation. The storyline involving his connection to the Lin Kuei was eschewed in favour of him being sent by Shao Kahn, the emperor of Outworld, to kill Sonya Blade and Jax Briggs. After entering the research facility which Jax was being held, Cyrax engages Jax in battle whilst Sonya deals with the extermination squad accompanying Cyrax. Cyrax's body self-destructs after Sonya incinerates him with a variation of her "Kiss of Death" Fatality.

In the film, he displays the ability to shoot tiny, spike-studded grenades and a corrosive, green plasma net - seemingly capable of rapidly and completely disintegrating organic matter, but is successfully and harmlessly blocked by Jax's cybernetic arms. His abilities as a ruthless martial arts fighting machine are shown, as he dominates Jax for almost the entirety of their confrontation. His name is not mentioned; he is just referred to as "a robot" by Sonya in a later part of the film. During the end credits, however, he is identified as Cyrax.

As a cybernetic ninja, Cyrax is well-equipped, both in martial arts involving ninjutsu and weaponry. Cyrax houses a number of weapons in his chest cavity designed for both incapacitating and destroying targets. Of the three cyborg ninjas, Cyrax is most associated with bombardment, his arsenal full of timed explosives with a seemingly unlimited supply. He also has access to an 'energy net' capable of incapacitating his targets completely. When his soul was returned to him, not only did Cyrax retain some of his cybernetic parts, he was also outfitted with state-of-the-art technology, courtesy of the Outworld Investigation Agency.

Cyrax was now equipped with a portable device that would allow him to freely traverse across the realms without the need of stationary portals. In addition, his armor is heat-resistant, as he was able to completely submerge himself in molten rock without severely damaging himself in the process. His net weapon was replaced with a buzzsaw-like appendage, used for mid-range combat. Cyrax is also able to relocate himself across short distances by separating all of his limbs and head as his torso would transport to a different area where all of the discarded limbs would rejoin. 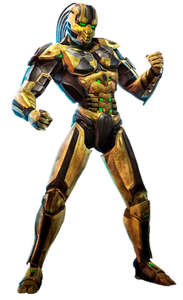 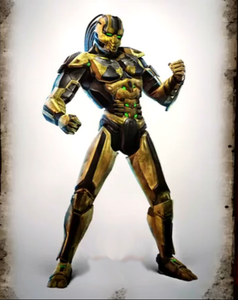 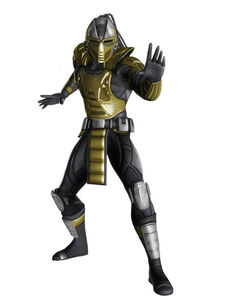 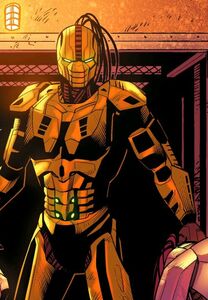 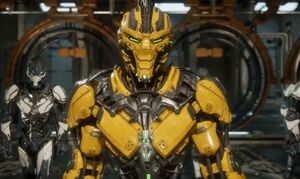 Young Cyrax from the original timeline and brought to the future by KronIka in MK 11.
Add a photo to this gallery 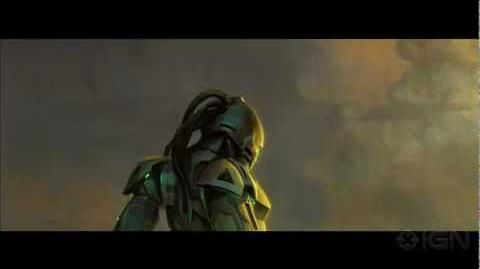 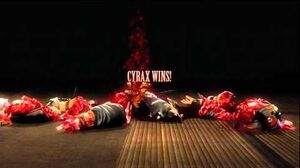 Retrieved from "https://villains.fandom.com/wiki/Cyrax?oldid=4354082"
Community content is available under CC-BY-SA unless otherwise noted.