No information
Cyril Sneer is a greedy aardvark businessman and the main antagonist of the Canadian animated series The Raccoons. Though he is specifically evil in nature, he grew into a more respectable and honest individual as the series progressed.

He was voiced by the late Michael Magee.

In his first few appearances in The Raccoons specials, Cyril is a far more menacing and aggressive character who threatened everyone, including his own son Cedric, if things didn't work his way. In the first special, he organized attempted deforestation of the Evergreen Forest for profit until he was stopped by Schaffer and the Raccoons. In the following special The Raccoons on Ice, he arranged to have a stadium built over a lake where the Raccoons played hockey, accepting their challenge of a win-or-lose hockey game out of smug overconfidence. During this time, he also pressured Cedric to forgo his friendship with the Raccoons and became incredibly angry upon seeing Cedric come into the hockey match to save the lake. Apparently, Cyril kept his word (or perhaps was pressured to do so) and the lake is preserved.

Cyril takes a different role in The Raccoons and the Lost Star wherein he is a maniacal dictator of an alien world inhabited by individuals similar to the usual Raccoons cast. Schaffer finds himself in this otherworld after boarding a rocket and joins forces with the resistance. In the meantime, General Cyril Sneer is searching for the "lost star", an artifact that would give him incredible power and thus permit his future plan of conquering the Earth. As he comes to meet this goal, he has his troops round up every animal in the area, prompting Schaffer and the resistance to rescue them. He also discovers his son Cedric's relationship with Raccoons ally Sophia Tutu and thus imprisons her, although everyone is saved later. The star is revealed to be the star tag on the puppy Broo's collar, showing an animal cruelty side to Sneer as he endangered the puppy while trying to retrieve it. Thankfully, his plot is foiled, although it is shown that the entire story might have only been a dream.

As mentioned before Cyril remained a greedy character but began to move away from such outright villainy after the end of the first series - tending to endanger himself and his minions with his greed rather than the environment. He still showed some traits of environmental threats, most notably in his attempts to mow down the Evergreen Forest to build establishments. He also retains some of the animal cruelty streak, regularly mistreating his (admittedly nasty) dog Snag. Cyril has also used Snag to attack or intimidate others, notably the Pigs.

Even when playing the full-on villain Cyril Sneer was not completely evil, he tended to oppose people only if they stood against his plans and was capable of being a good father to Cedric Sneer despite their differing views on the world. In the series finale, he changes his ways, and becomes Cedric's business partner, and never become greedy and ruthless again. 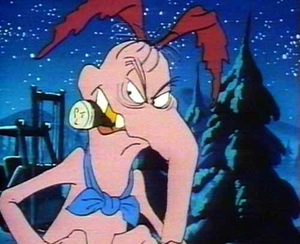 Add a photo to this gallery
Retrieved from "https://villains.fandom.com/wiki/Cyril_Sneer?oldid=3648395"
Community content is available under CC-BY-SA unless otherwise noted.