Profiteering.
Stroking his own ego.

Remove the Cooper Legacy and prove himself the greatest thief (ultimately failed).

Produce fake royal documents in the past, so he can take over France, and possibly more of the world, in the present day (briefly succeeded).

Cyrille Le Paradox (known in promotional materials as The Collector) is the main antagonist of Sly Cooper: Thieves in Time. He is an egotistical skunk who despises the Cooper family and tries to exact vengeance upon them by traveling back to different periods in time in order to gather the canes of various Cooper ancestors.

Like Sly, Le Paradox descends from a family of thieves and also particularly tried to follow in his thieving father's footsteps. His father attempted to steal a massive diamond during a major heist, and frame Sly Cooper's father for the crime. However, Sly's father beat him to the punch and Le Paradox's father went to jail instead. In the meantime, Le Paradox attempted to engage in thieving himself, but with no one to teach him the family business, was immediately arrested after a string of failed jobs. Ironically, it was in prison where he developed the skills of manipulation and bribery that would lead to his rebuilding himself. After his release, he gradually influenced his way into becoming an art thief with his prison connections. Putting together a crime syndicate centered around the smuggling of priceless stolen treasures, and masterminding heists worldwide. All the while maintaining the image of a well-refined rich art collector.

In the beginning of Sly 4, Sly investigates into Le Paradox's art theft activities and arranges to pull a heist. When Bentley approaches Sly about the disappearing passages of the Thievius Raccoonus, the Gang arranges to steal a Feudal Japanese sword from Le Paradox's art museum to power the time machine.

Throughout the game, Le Paradox hires five individuals (El Jefe, Sheriff Toothpick, The Grizz, Penelope, and Ms. Decibel) to steal the selected Cooper ancestor canes for his purposes while piloting his massive time-traveling blimp. Initially, he does not appear (aside from brief silhouettes) and instead has his gas mask-wearing rat minions attack and retrieve the respective items.

In the fifth chapter 40 Thieves, Le Paradox fully physically appears alongside Miss Decibel to check up on her process. He arranges for her to produce fake documentation from the Ancient Arabian era in order to create a faux royal lineage to further boost Le Paradox's image, wealth and status. He defeats Sly's ancestor of the era, Salim Al Kupar (who had grown old), and takes his cane for himself, while leaving Miss Decibel to be arrested. He declares he will return to Paris in the present day in order to establish his "lineage" with Carmelita as a hostage.

In the final level of present day Paris, Le Paradox seems to have succeeded, as banners of him are seen all over town and a sculpture of his head adorns the Eiffel Tower. Sly and the Gang, now accompanied by Sly's five ancestors, make their way into Le Paradox's blimp and retrieve the ancestors' canes, thus repairing the time anomalies caused by Le Paradox's theft of their respective weapons and returning them to their time periods. Before returning to his time period, "Tennessee Kid" Cooper shoots Sly and Carmelita free from the glass chamber Le Paradox used to imprison them. However, Le Paradox opens a time portal in the process, causing the blimp to tear apart.

Sly moves to confront Le Paradox and duels with the skunk as the blimp breaks apart. During the fight, Le Paradox declares his intent was to triumph over the Coopers as the best thief in the world, beliving he proved himself superior to the Cooper Clan by robbing them of their canes. Sly informs him that his egotistic actions have actually cost him everything, because by traveling back in time to rob the Cooper Clan, he also blew his own cover as an art dealer and exposed his black market operation to the police. Moreover, Le Paradox can't truly take credit for the thefts because he never actually stole any of the canes himself, but he just paid other people to do the jobs for him. Realizing Sly was correct, he expressed anger at not thinking his plan out.

The two of them continue to fight until Sly triumphs, leaving Le Paradox to hang over the edge and beg Sly to help him. The skunk steals Sly's parachute and jumps overboard when he is hit by an airplane and falls into the sea. Le Paradox is later found in the River Seine and arrested, locked away in an odor-proof cell.

Le Paradox is a conniving and treacherous individual determined to make a name of himself as the world's greatest thief. He pools his resources into his work in creating the time-traveling blimp in order to realize this goal by stealing the selected Cooper ancestors' canes, believing this will prove his worth as a thief. He also gives his hired hands a degree of free reign in their respective time periods as long as they provide him with the canes and other products needed for his scheme. He is quite indifferent to their situations and is willing to cast them aside when they have served their purpose, even willing to leave them stranded in the time eras as punishment for their failures.

Another defining characteristic of Le Paradox is his arrogance. In addition to wanting to be seen as the world's greatest thief, he forges fake documents in order to create a fake royal lineage to increase his status, which apparently worked to some degree, given the banners and Eiffel Tower topper seen in the last level. However, this also makes him somewhat incompetent in the process. As Sly points out, this effort only served to expose Le Paradox for his crimes.

Le Paradox also fits the stereotype of the smelly skunk character. This is reflected in his army of gas mask-wearing rats and how hazardous stink gas is used as an obstacle on his blimp. 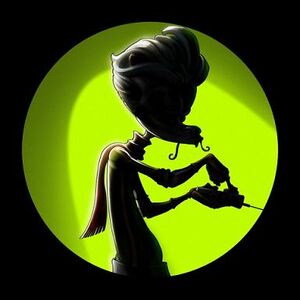 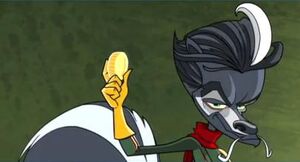 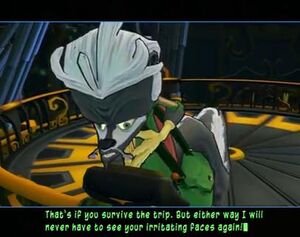 Retrieved from "https://villains.fandom.com/wiki/Cyrille_Le_Paradox?oldid=3789451"
Community content is available under CC-BY-SA unless otherwise noted.