Cyrus: Mind of a Serial Killer

Cyrus Danzer, simply known as "Cyrus", is the titular main antagonist of the 2010 slasher, horror and thriller film Cyrus Mind of a Serial Killer directed by Mark Vadik.

He was portrayed by Brian Krause (who also played Charles Brady in Stephen King's Sleepwalkers), and his younger self is portrayed by Walter Bezt.

A thriller film based on real events, the film shows an independent television reporter and her cameraman, part of a small independent news crew interviewing a man in regards to a serial killer by the name of 'Cyrus' (whose full name is Cyrus Danzer), the man is dubbed 'The County Line Cannibal'. The man traces back through the story of the serial killer and why he became the monster he is.

A girl was in the car and she suddenly screams and Cyrus kills her.

Maria tells of the murders committed by Cyrus showing the photos of the girls killed brutally. Cyrus stops the girls firmly in the machine trying to break the door of the car but the girls are able to flee, later Cyrus shoots the gun killing one of the group of friends. Meanwhile he kidnaps two girls and tortures them and does the same with the other girl. Cyrus' wife thought it was all normal that she discovered that her husband was a serial killer, Cyrus was upset with it and threatened her with death if she told someone or the police.

After kidnapping a man by binding him and embalming him, Cyrus shows him to Maria and kills him.

After Cyrus apologizes for another violent woman and kills her after trying to kill Maria, but she does not succeed and Cyrus is pulled by Maria's knife. 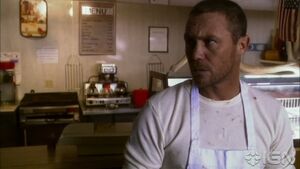 Cyrus
Add a photo to this gallery
Retrieved from "https://villains.fandom.com/wiki/Cyrus_(Cyrus:_Mind_of_a_Serial_Killer)?oldid=3998286"
Community content is available under CC-BY-SA unless otherwise noted.