NOTE: This article is about the incarnation of D'Spayre from the Marvel Cinematic film series. The mainstream version can be found here: D'Spayre.

Feeding off people's despair to stop his migraines.

Ascend to godhood in order to no longer feel his migraines ever again (succeeded).

Gain more power by draining every ounce of despair from people in New Orleans (failed).

Andre Deschaine, also better known as D'Spayre, is the main antagonist of Season 2 of the TV series Marvel's Cloak and Dagger.

He was a former jazz musician who acquired powers after being exposed to the Darkforce and the Lightforce during the explosion of the Roxxon Gulf Platform. Becoming the secret leader of a sex-trafficking ring in New Orleans, he fed off the victims' despair to ease his migraines. Eventually, he intended on becoming a god-like being and put the city's population into a trance, which pitted him against the duo Cloak and Dagger. Eventually, Deschaine learned that he would ascend to a Loa, D'Spayre, and intended to put all of New Orleans' population into a desperate trance and turning them into his audience so he can play his music forever in the Darkforce Dimension. He was defeated at the hands of Dagger, unable to let him immorally attempt to free himself from pain if it means hurting others.

He was portrayed by Brooklyn McLinn.

D'Spayre had a passion for jazz from a young age, eventually becoming a jazz musician. He regularly played his trumpet at a location called Club Delight with the rest of his band. He was forced to stop playing after suffering from intense migraines on a regular basis, eventually even leaving his beloved trumpet out on the street. Jazz was one of the few things that were important to him and being unable to play contributed greatly to his state of depression. In addition the club burned down, causing D'Spayre to lose his favorite place in the world.

After some time, D'Spayre decided that he had nothing worth living for and planned to commit suicide by jumping off a bridge. However, before he could jump, his attempt was interrupted by a nearby explosion. At this point, he was not aware that the exposure to Darkforce and Lightforce energy in this incident imbued him with superhuman abilities and a connection to the Darkforce Dimension.

He woke up in hospital, being taken care of by a nurse, Lia Dewan. Dewan explained that witnesses had seen his suicide attempt but that she would take care of him and that she could make him feel better.

While in hospital, D'Spayre came into contact with Lia Dewan and in his mind, he could see a metaphysical record store. The record store's shelves were empty except for the vinyl records connecting to Dewan. Playing the record immediately gave him a rush of positive feelings, comparable to that of a narcotic. He convinced Dewan to leave her job and come with him where he would be able to give her back her love for music.

With Dewan, D'Spayre started a support group. He was able to get a feel of people's emotions, memories and lives through physical contact with them. D'Spayre was able to drain or use their remaining hope, emotions and memories to temporarily prevent his recurring migraines at the victim's cost, usually leaving someone in a near-emotionless state of despair.

Using the support group as a cover, D'Spayre and Dewan continued to take in those in need, helping those that were easily assisted and taking advantage of the more serious cases. The latter part of this organisation developed even further from being a source of comfort for D'Spayre to becoming a full business strategy where girls in need were kidnapped, drained of hope and then used in a sex trafficking operation. The girls were transported via privately owned ambulances which drew no attention and allowed for easy escapes. Because of the negative effects of D'Spayre's powers, the girls had little interest in fighting back and became easy to manipulate or abuse.

When Dagger and her mother came in to join the support group, D'Spayre was friendly and helpful towards her, even talking to her and assisting her outside of the group. During the support group sessions, Bowen expressed interest and concern in Mikayla Bell, one of D'Spayre's intended victims. After some time, when they decided that nobody would notice her disappearance, Bell was kidnapped by D'Spayre and Dewan. Dagger grew increasingly concerned about the missing girl and began to investigate her disappearance. D'Spayre and Lia subtly tried to throw Bowen off track, but when that failed and Dagger began to investigate the ambulances, they decided to resort to harsher methods.

Having discovered too much, Dagger was captured by Lia and D'Spayre, drugged and drained of hope. D'Spayre displayed the ability to leave his victim completely unaware of whether they were experiencing reality or a hallucination that was induced by himself. Dagger was monitored by Lia at the Viking Motel where many other girls were kept for use in the sex trafficking operation.

While Tandy and the other girls were kept hidden, D'Spayre kept up appearances by still regularly helping those that came to the support group in need and even meeting Cloak who came looking for Dagger. D'Spayre used his abilities to convince Cloak that Dagger had likely given up on him and that Cloak should no longer bother trying to find her. While D'Spayre selected the appropriate records in his record store to manipulate Cloak, he was unaware that Mayhem, who had been trapped in the Darkforce Dimension had learned of his secret and had gained access to the record collection as well.

While D'Spayre was able to temporarily prevent his migraines and improve his own emotional state by absorbing hope and power from his victims, he longed for a more permanent solution. After seeing a Voodoo veve symbol in the Darkforce Dimension, he sought to find the meaning of it and hoped that it was a sign for him. He found Chantelle Fusilier who practiced Voodoo and was much more familiar with such symbols. Chantelle told D'Spayre that the symbol appeared to reference something he could unlock in order to increase his powers and ascend to a more god-like being, however, she could not give him more information as it was something that needed to be discovered by him. When D'Spayre made physical contact with Chantelle, he found that she immediately understood his ability and entered his sacred record store along with him. D'Spayre saw Chantelle as a potential threat now that she was aware of his true nature and allowed her to relive a pleasant early memory of her adopted niece while he played a record of her heartbeat and slowly stopped it, killing her.

After using Lia once again to help him feel better, D'Spayre drained her of her emotions and mental capacity and left her, unconscious, on the side of a road. When Cloak and Dagger investigated, D'Spayre was able to communicate indirectly with them in Lia's mind, telling them that he wanted an audience large enough so he could draw enough despair to finally be able to play a "blue note" and become a god.

D'Spayre returned to the empty area where his favorite place, Club Delight, used to be and collected all those people he had drained to place them together as an audience for his trumpet solo. With the brainwashed and manipulated crowd humming along, D'Spayre continued playing, lighting up his veve brighter and brighter. Amongst this crowd were Mikayla Bell and Melissa Bowen. Despite an attack from Cloak and Dagger, D'Spayre managed to play long enough to unlock his ascension into becoming a Loa while his physical body was killed.

Fall of a God

No longer content with feeding on one person at a time, D'Spayre began abducting the city's population to add them to his "audience" so he could feed off of them. Cloak and Dagger confronted him in his lair but he separated the two, forcing them to face their personal demons, with Dagger's being her father and Cloak's being a perfect version of himself. The duo managed to regroup and switch opponents, but D'Spayre separated them once again. The two were then able to overcome their fear and face-off D'Spayre. Dagger was able to exploit his weakness of bright lights and free Melissa, Mikayla and Mina Hess while Cloak stole his trumpet. As the three women held him down, Cloak teleported Dagger in front of D'Spayre and stabbed him in the heart with a light sword. The two then confronted him in his mind and forced him to hear the source of his own misery as he did on countless others, and even though he too had his own fair share of suffering it didn't give him the right inflict it upon others. Dagger then used a dagger to put his record on a loop and turn his power against. The two then left, ultimately ending his threat once and for all. 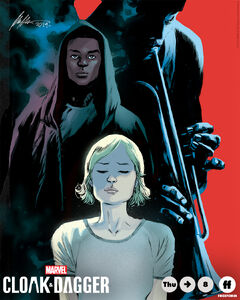 D'Spayre featured on the promotional poster for the episode "Vikingtown Sound". 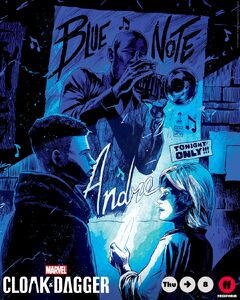 D'Spayre featured on the promotional poster for the episode "Blue Note". 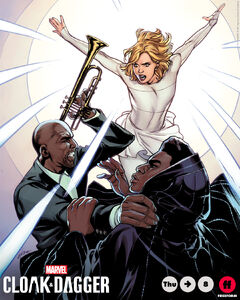 D'Spayre featured on the promotional poster for the episode "Level Up".
Add a photo to this gallery

Retrieved from "https://villains.fandom.com/wiki/D%27Spayre_(Marvel_Cinematic_Universe)?oldid=3471071"
Community content is available under CC-BY-SA unless otherwise noted.