Member of the Kytinn race

Serving Lord Shinnok and the Brotherhood of Shadow.
Feeding on her opponents corpse.

Aid Lord Shinnok and the Brotherhood of Shadow in their diabolical quest to bring all of the realms to their knees.
Aid the Revenants on their destructive path of revenge and chaos.
Aid Kronika in her scheme to remake the universe (all failed).

D'Vorah is a Kytinn, a species of colonial insects living inside. She made her debut in the 2015 fighting game Mortal Kombat X. She lives in Outworld and serves as Kotal Kahn's first minister. She serves as the secondary antagonist (along with Quan Chi) of Mortal Kombat X and a major antagonist in Mortal Kombat 11.

She was voiced by Kelly Hu, who also played China White in Arrow, Miss Mirimoto in Scooby-Doo! and the Samurai Sword and Lady Deathstrike in X2: X-Men United.

Hailing from the Arnyek Islands, D'Vorah's realm was conquered by Shao Kahn and she chose to serve the dark emperor to avoid becoming a slave. Rising in political power, D'Vorah now serves Kotal Kahn as his second in command and closest adviser, assisting him in the civil war against Mileena.

D'Vorah returns as a playable character in Mortal Kombat 11. She was revealed on February 5, 2019.

During the game's story mode, D'Vorah first appears at the end of Kotal Kahn's chapter; helping Shao Kahn and his men escape after Kotal and Raiden's group defeated them. Afterwards, she reveals that she killed Milleena, resulting Shao Kahn almost killing her. Kronika and Geras then arrive with the former warning Shao Kahn that D'Vorah is under her protection.

D'Vorah's physical appearance draws on several insect motifs. Her skin takes the appearance of a yellow chitinous hide with four wing/pincers jutting out from her back. The back of her head is adorned with black markings and her lips are naturally black.

On the heels of her feet are what looks like high heel wedges. Her eyes are compound, possessing the same fractured appearance as a fly's eyes. All of her teeth are sharp and pointed, exhibiting possible carnivorous eating habits.

D'Vorah wears a black top and hood, spiked gauntlets on her arms armored ringlets on her forearms, and armored shin guards. A single scarab-shaped piece of jewelry with a green centered gem rests around her neck.

D'Vorah's insect affinity gives her control over several different type of large bugs and winged insects. She is able to use bugs for a variety of purposes, from offensive attacking to sealing wounds. Her natural extra limbs give her give her lethal pincers to use in combat and allow her to fly to a degree.

She is one of the few to have a regeneration factor as shown in the comics, she was able to reform from a swarm of insects after being torn in half by a possessed Reiko. 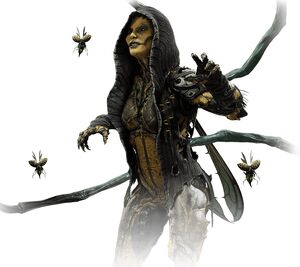 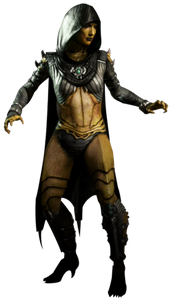 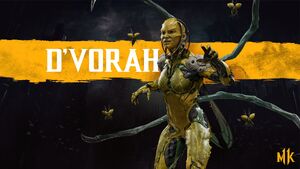 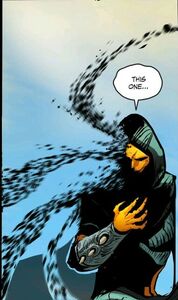 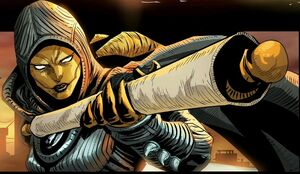 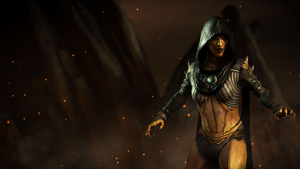 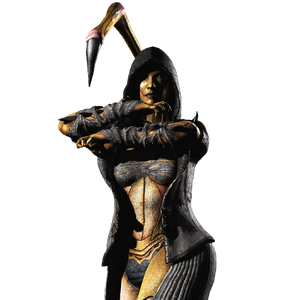 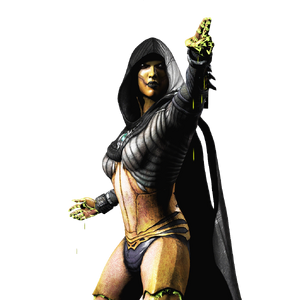 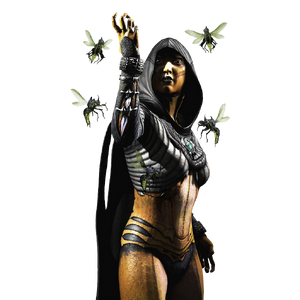 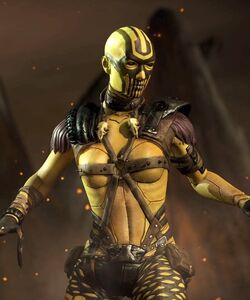 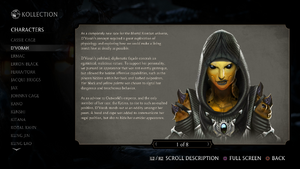 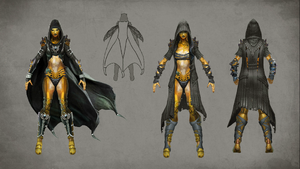 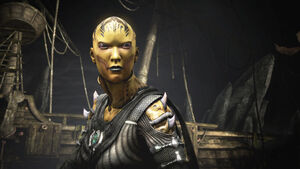 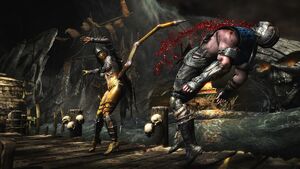 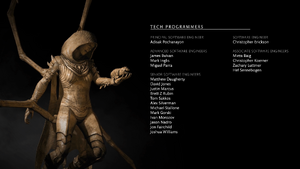 D'Vorah in the credits. 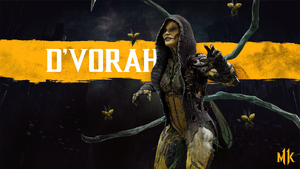 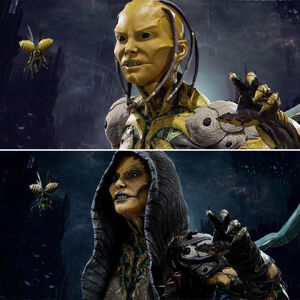 Retrieved from "https://villains.fandom.com/wiki/D%27Vorah?oldid=3569791"
Community content is available under CC-BY-SA unless otherwise noted.