Leader of the anti-human league

Destroy every human on the entire world

Dóminus also known as prototype DOM1NU5 is the secondary antagonist in Yo Soy Franky, serving as the main antagonist of the third season. He's an android from the future. He comes from 2035. He's the leader of the anti-human league.

He appears first time once he communicates with Luz once she arrives to the year 2016. He told her to do everything so she might make sure Franky And Chris never become together again.

Luz contacts Dóminus that she has a great plan to breakup Franky and Chris. Dóminus informs her about the wending of Franky and Chris in the future. Franky than comes to the bathroom and Luz has to put Dóminus away.

When Sofia wants to fix Luz, but Luz stops time and contacts Dóminus, she asks him if she can eliminate Sofia. Dóminus disagrees and tells Luz that Sofia created him and if she might be eliminated he would never exist and create time travelers. But he informs Luz that Franky and Chris are marrying on the moon, and that half of the guests are androids, and the rest of the guests are humans that live in peace with them. He tells Lux what to do.

Luz contacts Dóminus again Once Franky is in school. Dóminus informs her that Future Chris is interviewing how he got Franky the second time. Then Dóminus tells Luz that Franky and Chris are going to become a couple again in any moment.

Luz calls Dóminus and informs him that she drifted Tamara away from Trece for good. She tells him that the mission is complete and asks for her creators. Than Dóminus and Luz start to fate away for an unknown reason. But they’re saved. Dóminus informs Luz that Franky and Chris reunited and asks her to be careful.

Luz contacts Dóminus in school so he might send all the info he knows about Chris.

Luz contacts and informs Dóminus about her success. Dóminus congratulates her.

Luz somehow failed, and Dóminus gets angry on her.

Luz contacts and informs Dóminus about her second success. But Dóminus gets angry cause she didn't change the future and that he will have to send another android. Luz gets angry and throws her phone.

Dóminus informs Luz that Clara saw him, but also tells her that he has a plan.

Dóminus Time travels into 2016, and camouflages himself into a human. He accouters Ramon and hypnotizes him. He meets Clara, and Clara asks him where is his skin. Dóminus informs her that he's from an comedic group and leaves. 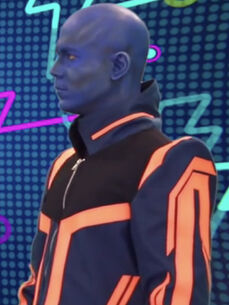 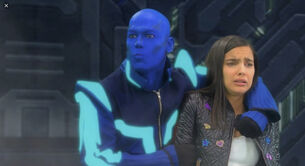 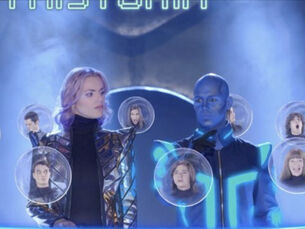 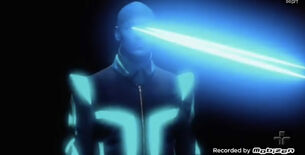 Dóminus shooting at Doce.
Add a photo to this gallery

Retrieved from "https://villains.fandom.com/wiki/Dóminus?oldid=4103892"
Community content is available under CC-BY-SA unless otherwise noted.