Protector of the Cubot Prototypes

Prevent Sonic and his friends from closing the fissures (failed).
Protect the Cubot prototypes.

D-Fekt, originally named RagnaBot, is the main antagonist of the 2016 Nintendo 3DS game Sonic Boom: Fire & Ice. He was once a mining robot built by Dr. Eggman, who can magnetically levitate any object, even himself, to form vast creations of his own imagination.

He was voiced by Wally Wingert.

D-Fekt is an orange robot with three magnets located on his head. He has yellow hands with four gray fingers on each. He has a gray face with blue LED eyes and a mouth, making him look similar to Orbot and Cubot. Until the television series, D-Fekt was mute and could only speak through robotic grumbles and hand gesturing even though he had a mouth (this was due to Eggman not installing a voice chip before he was scrapped).

Originally under the name RagnaBot, Dr. Eggman built D-Fekt to locate a new element discovered called Ragnium via magnetism to energize his robots. However, D-Fekt ends up malfunctioning and magnetizes everything but Ragnium.

After Eggman disposes D-Fekt due to his failure and goes off to find Ragnium on his own, D-Fekt learns to use his powers to his advantage and now seeks to defeat Sonic the Hedgehog to win back Eggman's appreciation.

D-Fekt first appears when Sonic and Amy discover the first fire and ice fissure in the Kodiak Frontier. He attempts to stop the two, but fails when Sonic jumps out of the way. He then angrily storms off to create the first boss, Unga Bunga.

After Unga Bunga, is defeated, Sonic, Amy, and Tails chase after D-Fekt, only for him to be captured by Dr. Eggman, who orders him to do one job: protect the remaining fissures from being closed by Sonic and friends. He then throws him off into the distance to get back to work. In the second area, Seaside Island, D-Fekt is cornered by Sticks the Badger, who is infatuated by his "adorable" design and believes it to be love.

Because of Sticks' distraction, Sonic, Amy, and Tails succeed in closing the second fissure. D-Fekt rushes off to the Paleo Tarpits while Team Sonic argues with Sticks over D-Fekt's (or Ador-O-Bot 2000 as Sticks refers him) destructive capabilities. In the Paleo Tarpits, Sonic and Tails find the third fissure and close it.

D-Fekt attempts to use his magnetism to reactivate the fissure, but it is once again closed by Sonic and Tails and D-Fekt falls into a puddle of tar, creating the second boss, Sticky Situation. After Sticky Situation is defeated and D-Fekt runs off to protect the remaining fissures, Sonic and his friends question why D-Fekt is so desperate to keep the fissures open.

After Sonic and his pals close the fissure in Cutthroat Cove, Tails learns that the fissures leak out Ragnium radiation that D-Fekt is covered with. After being caught up by Sonic and the gang, D-Fekt remembers when Eggman first created him and was disgusted by his reversed magnetism, calling him D-Fekt instead of his regular name of RagnaBot. D-Fekt jumps into a pile of rocks and creates the third boss, Creepy Crawly, which Sonic and Knuckles defeat.

In Gothic Gardens, Sonic and his friends succeed in capturing D-Fekt, but Sticks lets him go because she thought he was scared. When they do find him resting in the graveyard, Tails uses Sticks to place a tracking device on him so they can track where the Ragnium source is coming from.

Sonic, Tails, Knuckles, Amy, and Sticks follow D-Fekt to discover a mine in Ragna Rock, where Eggman is harvesting Ragnium from within the Earth. Eggman scolds D-Fekt for failing to protect the fissures and kicks him around, saying even D-Fekt was not a worthy name for him.

When Sonic and his friends arrive to confront Eggman, D-Fekt, having enough of Eggman's abuse, magnetizes the entire mine together to create Double Trouble, the final boss of Sonic Boom: Fire & Ice. After Sonic and Sticks defeat the elemental beast, Eggman digs up D-Fekt from the rubble of the destroyed mine and apologizes for mistreating him and gives him to Sticks as a present for helping him, before Tails removes his magnetizing ability to make him permanently harmless and nonviolent.

In the season 2 episode "Return to Beyond the Valley of the Cubots", D-Fekt, still under alliance with Sonic, is given a voice chip by Tails, allowing him to express a desire of purpose. Eventually, D-Fekt encounters the Cubot prototypes and, after falling in love with Cutebot, decides to lead them in rebellion against Eggman, who too scrapped the group for their failed potential, succeeding in enslaving him and his goons and conquering his base.

During a visit from Team Sonic, Sonic accidentally tells D-Fekt that revenge was sweet, motivating him to return to the village and use his magnetism to trash the facilities that rejected him while he was still mute. Sonic and friends try to tell D-Fekt that he is going too far, but D-Fekt grows to rage and attacks them, threatening to destroy everyone who wronged him. Suddenly, Eggman arrives with vengeance of his own and takes Cutebot hostage using a MeBot with powers similar to D-Fekt's, gaining the upper hand. After Sonic saves Cutebot and D-Fekt defeats both Eggman and the MeBot, D-Fekt decides that he will be best happy as the protector of the Cubots, and leaves telling Sonic that they will likely cross paths eventually, but warns him that will protect the Cubots from anyone he labels as a threat. 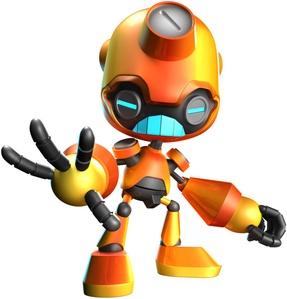 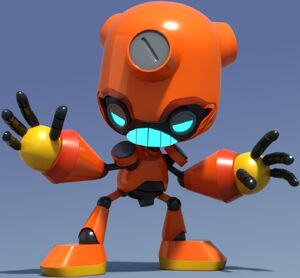 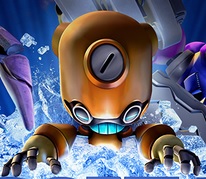 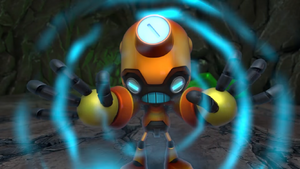 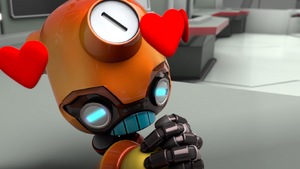 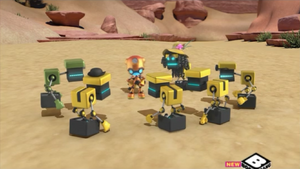 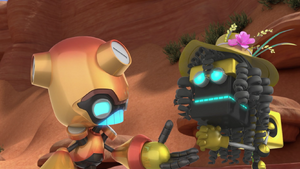