Each members possess wrestling moves and techniques unique to themselves

D-Generation X, often shortened to simply DX, was a pro wrestling stable that appeared with WWE in various incarnations from 1997 to 2010.

The group originated in the midst of the WWF's "Attitude Era" from 1997 to 2000. Their gimmick was that of a gang of rebels who broke the rules, acted and spoke as they pleased, no matter how provocative and/or insulting. Noted for their crude and profane humor and their sophomoric pranks, the stable has been dubbed multiple times as the "most controversial group in WWF/E history".

After its original run with members Rick Rude, Chyna, Triple H and Shawn Michaels, the group expanded to become a mainstay of the Attitude Era with new additions X-Pac, the New Age Outlaws and Tori until it disbanded in August 2000. After a teased reunion in 2002, DX reformed in June 2006 as the duo of Triple H and Shawn Michaels for the remainder of the year, and again in August 2009 until March 2010, shortly before Michaels' retirement. 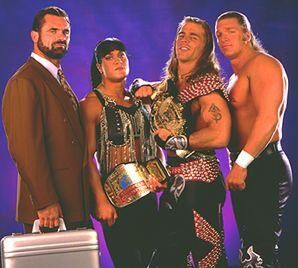 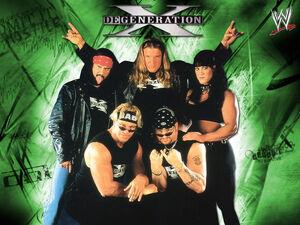 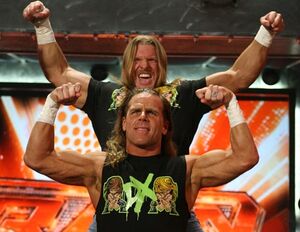 Shawn Michaels and Triple H as the the tag team DX in the late 2000s. 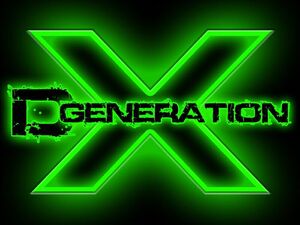 Add a photo to this gallery
Retrieved from "https://villains.fandom.com/wiki/D-Generation_X?oldid=4285886"
Community content is available under CC-BY-SA unless otherwise noted.