Wrecking ball, which can also function as a grappling claw

Take control of the Crater with the help of D-Structs.

Condemn the entire population of the Crater to mass starvation (both succeeded).
Use the Dreadtrux to kill Ty and his friends.
Force the Crater's community to agree to help him defeat Ty and his gang.
Rule over other locations after taking over the Crater (all failed).

D-Stroy is the overarching antagonist of the Dinotrux franchise, and one of the two main antagonists of Dinotrux: Supercharged, alongside D-Structs. He is D-Structs's older brother, and is bigger, tougher, stronger, and more intelligent than him. He is also Ty Rux's second archnemesis.

He is voiced by Brian Dobson, who also voiced Skeletor in the 2002 Masters of the Universe TV show and Majin Buu in the Ocean Productions dub of Dragon Ball Z.

Not much is known about D-Stroy other than the fact he is D-Structs's brother. One time, they were together, and decided to attack a trio of Hydrodons. However, during this attack, D-Stroy was attacked, but D-Structs left him behind. They departed to their own ways after that, but D-Structs somehow knew where D-Stroy went to.

D-Structs sends Skrap-It to D-Stroy's lair after he is immobilized by a pack of Scraptors. D-Stroy appears and accompanies Skrap-It back to his younger brother. After that, D-Structs and D-Stroy briefly discuss their past. D-Structs debates himself on whether or not he should trust his brother, but when D-Stroy proves to be taunting, D-Structs tells him to leave.

However, the Scraptors wake up, and D-Stroy agrees to help D-Structs, but only if he admits he was wrong in their last encounter. With that, D-Structs realizes he has no choice but to trust his older brother, admitting he was wrong. The two then fight off the Scraptors and escape where the Scraptors live, but some tension still remains between them, as D-Structs refuses to tell D-Stroy where his own territory is located. However, D-Stroy eavesdrops on him and Skrap-It, and hear them referencing the Crater.

D-Stroy continues to stalk D-Structs, seeing him attempt to trap Ty Rux and his friends at a tar pit, but they escape the trap. He later approaches him, and the two discuss ridding Ty and his friends from the Crater and taking over. He takes D-Structs to a sleeping Dreadtrux, which D-Structs has fought before. D-Stroy forces the Dreadtrux to wake up, and he and D-Structs start abusing it, and force it to heed their orders. Later on, D-Stroy sneaks into the Flatirons, and adds helium ore to Ty's builds, then accompanies D-Structs in attacking the Garage. After the two brothers start ruining and destroying the builds, they seemingly flee, but in reality, this is just the beginning of their attack.

Ty and his friends start repairing the builds, not knowing they are using helium ore as part of their builds. Revvit and Xee warn them, but it is too late; D-Structs and D-Stroy enter the area with the Dreadtrux. D-Stroy battles Ty and proves to be more of a match than D-Structs, announcing his intent on destruction. Seeing that the Dreadtrux is destroying the builds, and D-Structs and D-Stroy are a bigger threat than they thought, Ty and his friends decide it's best to leave the Crater. They try to escape using the bridge they built, but it is blocked off by helium ore. Xee shows them a secret entrance to a secret forest she found, and they follow her there.

D-Stroy, D-Structs, and Skrap-It try to follow Ty and his friends, but they lose them. Seeing that Ty and his friends fled, D-Structs suggests D-Stroy that they rule the Crater together, but D-Stroy refuses the offer, affirming him that "the Crater is just the beginning". He then rants at Ty (though the latter is nowhere to be seen), that he can run as far as he wants, but he and D-Structs will eventually find him and his friends.

D-Stroy and D-Structs both become tyrants ruling the Crater, enslaving all around them and condemning the entire population of the Crater to mass starvation to force them to agree to help him defeat Ty and his gang, and also continually abuse the mother Dreadtrux, and even attempted murder on Ty and his gang several times. However, this was because D-Structs was pressured by D-Stroy into working with him. Eventually, the D-Bros are finally defeated when the residents of the Crater are no longer afraid of them, and form a mob, returning to help Ty because he helped them. During the ensuing riot, D-Stroy betrays D-Structs by mockingly telling him that he's weak. Because of this, D-Structs, fed up with D-Stroy, tells the mob that D-Stroy is all theirs, and they fight the latter all the way to the tunnel the mother Dreadtrux, who is now on Ty's side, carved out for him and his friends to go back to the Crater, and the mob causes the entrance of the tunnel to collapse. It's possible that D-Stroy was killed by the mother Dreadtrux he had abused, as it would be a well-deserved punishment for his actions.

D-Stroy is bigger, smarter, stronger, more cunning, unpredictable, unstoppable, undefeatable and powerful than D-Structs, Ty Rux and other Dinotrux species. His tail has a wrecking ball and grappling claw tail that is also bigger than D-Structs' own, being differeciated with five spiky drills, six forward-curved spikes on his neck, and two curved spikes on each section of his tail (adding up to a total of six). He is also larger than D-Structs, while he also has folding spikes in his knees and more developed arms.

D-Stroy is a sadistic psychopath who will stop at nothing to achieve his goals. Just like his brother, he is fearless and intimidating. He is also very brutal and harsh towards his new Dreadtrux "pet", willing to use it to destroy the Dinotrux once and for all.

He also has no redeeming qualities, as he doesn't care about D-Structs, and will do anything to achieve his goals, even if he has to use D-Structs to achieve them. Although it seems like he is a close ally to D-Structs, he doesn't like him that much like he did before; plus, despite seeming to be affable by suggesting he, D-Structs, and Skrap-It can rule the Crater together, D-Stroy truly isn't, as he is also shown to be extremely treacherous, as revealed by D-Structs when he tells Skrap-It of him after the latter's suggestion. 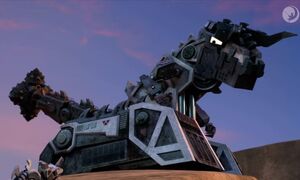 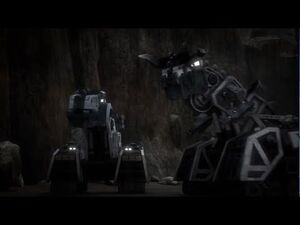 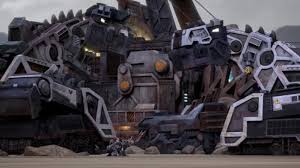 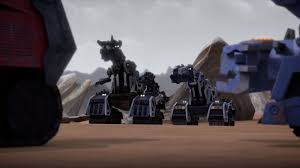 D-Stroy and D-Structs about to fight Ty and his friends.