Help Finn and Rose in order to gain their trust, so that he can gain money from them (formerly).
Buy his freedom from the First Order by selling Finn and Rose along with the Resistance plan (succeeded).

DJ (shortened for Don't Join) is a supporting antagonist in the 2017 film Star Wars: Episode VIII - The Last Jedi, the second film of the Star Wars sequel trilogy. He appeared as the titular villainous protagonist of the 2018 comic called Star Wars Most Wanted: DJ.

He is a code breaker who found himself stuck in prison on Cantonica. At first, he seemed friendly to Finn and Rose and helped them get inside the First Order flagship, but later in the film, he saves his own skin by selling them out to Captain Phasma.

He was portrayed by Benicio del Toro, who also played The Collector in the Marvel Cinematic Universe, Fred Fenster in The Usual Suspects, Jack Rafferty in Sin City, Lado in Savage, the title character of the 2010 Wolfman film, Dario in Licence to Kill and Aaron Hallam in The Hunted.

After Rose and Finn are put in prison, they meet DJ, who happens to be a hacker. After Rose and Finn escape, DJ comes with them. Soon, after being chased by the Canto Bight guards, the two find themselves trapped on a hill, when one of the guards space ships comes up behind them. They discover that it was piloted by DJ, and he helps them get away.

Later, when Finn and Rose attempt to get into the Mega-class Star Dreadnought Supremacy to disable its light speed tracker, DJ uses his hacking skills to get them in. They disguise themselves as First Order officers to get inside and disable the tracker, but are captured by Captain Phasma and BB‐9E. After being captured, DJ saves his own skin by buying his freedom with information on the Resistance he overheard during their travels. This information proves useful to the First Order and he is awarded his freedom, money and a ship to escape with. Phasma and the stormtroopers hand over the money to him, then give him a ship, and he flies away with the money.

DJ has black hair and a beard that is mostly shaved. He has dark brown eyes and bushy eyebrows. Throughout the film, he is only shown with a black outfit, foreshadowing his true nature. He also has a scar on his right cheek. 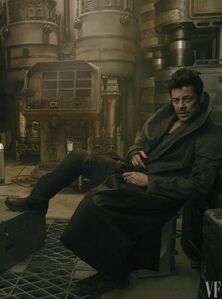 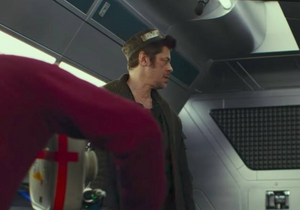 DJ in behind the scenes footage. 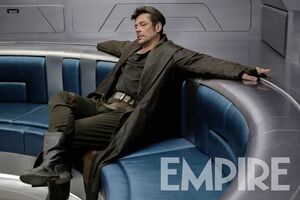 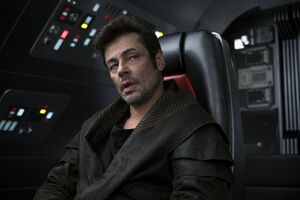 DJ in the space ship. 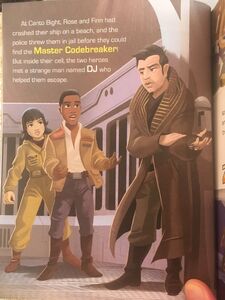 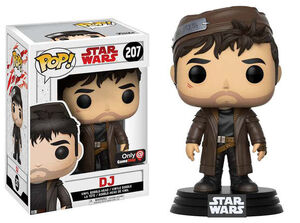 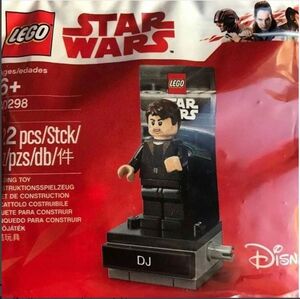