Villains Wiki
Register
Don't have an account?
Sign In
Advertisement
in: Spoilers, Five Nights at Freddy's Villains, Giant,
and 17 more

Unlike his original counterpart, DJ Music Man appears to be bigger and scarier than the original. He has light blue cheeks and eyebrows, a single blue stripe on his chin, and his upper teeth have black and white teeth that have an appearance of a keyboard. He also wears big red and yellow headphones on his head, his hat having a yellow stripe instead of white, and walks on all six legs with big hands covered in gloves.

DJ Music Man is described by Glamrock Freddy as a "Nice fellow" before entering his main ballroom. Upon activating and leaving his DJ booth, he is shown to favor the walls over walking on the floor, Presumably to prevent property damage. However, DJ Music Man is shown to be persistant as he sticks his hand into the arcade bathroom's instead of waiting for Gregory to leave. He is shown to dismiss all aggressive tendencies while manning the DJ booth, ceasing all aggressive behaviour aganist Gregory, who was a few moments before getting chased by him. 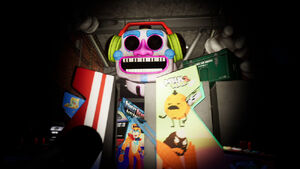