Commander of the Octarian Army

Take Zapfish from the Inklings for the Octarians to use as energy sources for their underground domes.

DJ Octavio is the final boss and main antagonist of the Splatoon videogame series. He is the evil leader of the Octarian Army.

Octavio appears as an octopus with a golden crown. Two of his tentacles are crossed and two are holding wasabi roots, and the other four are used as legs. Octavio does not fight hand-to-hand, instead opting to use a giant mecha that resembles a DJ podium.

After hitting Octavio with a missile four times, the music will change to a song sung by the Squid Sisters (the real identity of Agents 1 and 2), prompting Cuttlefish to break out of his bonds. After the fifth hit, Octavio will fly out of his machine, and one shot will send him flying back into it, causing it to self-destruct in a spray of ink.

When the level starts, Callie appears to be standing on a stage-like platform, once the player approaches her, she will turn around and will begin to rise into the air, with Octavio coming out of the ground in his Octobot King II. DJ Octavio uses her to help him fight the player, pl. DJ Octavio has three phases instead of five and it remains similar to the first Splatoon.

The first phase starts with DJ Octavio firing fists while the player tries to launch them back, similar to how he was fought in the first game. Occasionally, his punches will become more difficult to ink and will sometime have to be dodged. After a couple of punches inked back to him, he will pop out of his mech and the player will have to ink him. Once they do that, he will start firing 'Calamari Bombs'. If the player does not get rid of the calamari bombs, they will turn into spirals of Purple Ink which the player is unable to swim through. DJ Octavio can also use his mech as an Ink Shower which will make the mech go really fast and leave a huge trail of Purple Ink behind. Another attack of Octavio is a Bomb Rush, as he uses Splat Bombs. Once he is popped enough times, he will enter Phase two.

Phase two begins with Marie using a Splat Charger on Callie to get rid of the 'Hypno-Shades' Octavio put on her. The Phase is similar to the previous one, though Octavio will be much faster with his attacks, he also throws out more Calamari Bombs. The bombs he uses for the Bomb Rush are Suction Bombs. Ink Octavio once and enter the Final Phase. 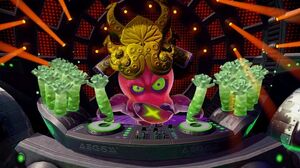 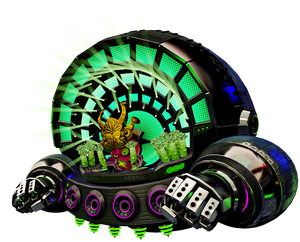 Retrieved from "https://villains.fandom.com/wiki/DJ_Octavio?oldid=2969053"
Community content is available under CC-BY-SA unless otherwise noted.