Villains Wiki
Register
Don't have an account?
Sign In
Advertisement
in: Kamen Rider Villains, Force of Nature, Mascots,
and 44 more

See the outcome of the Helheim conflict.

Make things evolve into a new level with destruction.

DJ Sagara is the overarching antagonist of Kamen Rider Gaim. At first, Sagara appears as the "pirate" radio DJ of Yggdrasill Corporation, the position in charge of keeping the masses entertained, but in reality he is the true manifestation of the Helheim Forest, and has been secretly manipulating the events of the series in order to discover Helheim's chosen.

He was portrayed by Tomomitsu Yamaguchi.

The Helheim Forest (ヘルヘイムの森 Heruheimu no Mori), shortened to just "Helheim", is the main source of conflict in Kamen Rider Gaim. It is the place which the Inves call home and where the Lockseeds are grown in abundance. Inves from the Helheim Forest are more powerful than the ones that are summoned by the Beat Riders. In order to enter this forest, one must have a Lock Vehicle, which can transport an Armored Rider at a sufficient speed, or find a random crack. The Yggdrasill Corporation somewhat also has a portal to the Helheim Forest in their base, which only someone who is from Yggdrasill knows about.

The Helheim Forest is a semi-alive place, having devoured entire worlds in its expansion, with its more recently discovered victim located in a valley. It is controlled by the Over Lord Inves, who control the plants and the very environment of Helheim itself. However, DJ Sagara is the very spirit of Helheim itself, making him the true ruler of the forest.

Believing that one must shine to be remembered by others, Sargara first appeared a mysterious man whose only agenda is to see the future unfold in terms of who can obtain the power of Helheim Forest. Sagara originally supported the Yggdrasill Corporation, appearing to them via hologram, as the DJ of a pirate radio station to promote the Inves Games with his Beat Riders Hotline internet show. Sagara ultimately sets up much of Zawame's terms such as Beat Riders and Armored Riders. With the first group of Armored Riders no longer needed by the Yggdrasill Corporation, Sagara begins to show an interest in Kouta and secretly helps him escape while presenting him with the Genesis Core that Ryoma made for his Sengoku Driver.

In time, telling Ryoma Sengoku the location of the Golden Fruit while continuing to aid Kouta, the later after convincing Roshuo to give humanity a second chance, Sagara is revealed to be not human while originating from Helheim Forest and deeming Kouta worthy of using the Kiwami Lockseed. It was only after, the Golden Fruit is ultimately entrusted to Mai, that Sagara is revealed to be the will of Helheim Forest itself. As an immortal embodiment of the forest, Sagara's task is to observe and hasten evolution, explaining that only a Maiden of Fate can bestow the power of the Golden Fruit to one worthy of it. When Kouta is given the Golden Fruit and uses its power to transfer Helheim Forest's plants and Inves to a new barren planet with Earth remaining as it is, a surprised Sagara gladly accepts Kouta's wish. After seeing Kouta and Mai off while telling them to fill their new world with life, Sagara departs for another world (presumably Inves' new homeworld) to repeat the cycle. 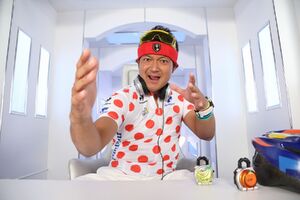 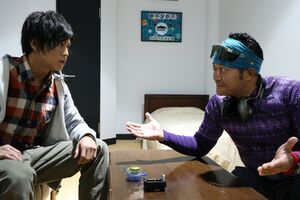 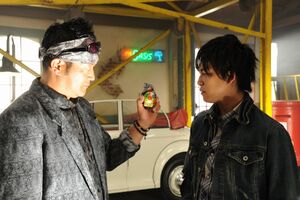 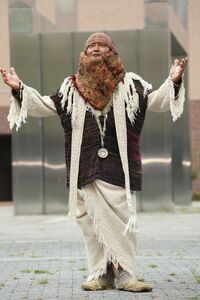 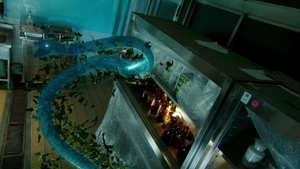 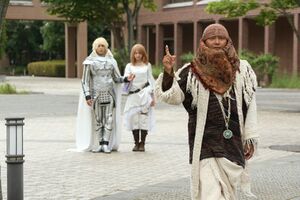