Keeping control over the teenagers.

Control the teenagers through music and order them as the "Children of Aku" to raid the village every night (succeeded for a while).

DJ Stylbator (also known as Music Maker Man) is the main antagonist of the Samurai Jack episode "Jack and the Rave".

DJ Stylbator was once a servant of Aku, he used a music player to get full control over the ravers that makes them cause chaos in a village near there. However, Jack came to help when one of the fathers of the teenagers brainwashed pleaded him to save his daughter, Olivia. When Jack infiltrated and got near Stylbator, both engaged in a fight that Jack won after punching Stylbator off to the possessed ravers. However, Stylbator activated his music player which turned into a giant robot and fought Jack again but was defeated once again when Jack finally destroyed his music player freeing the ravers from the music and defeating Stylbator for good. 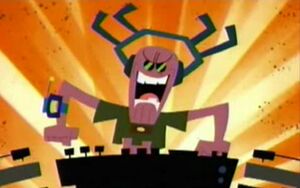 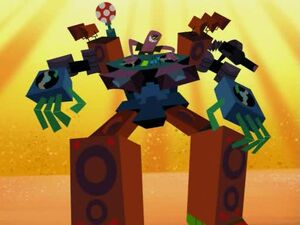 Retrieved from "https://villains.fandom.com/wiki/DJ_Stylbator?oldid=3944353"
Community content is available under CC-BY-SA unless otherwise noted.