Take over the city with an army of Helping Hats (succeeded; briefly).

Get rid of Lewis, Wilbur, Carl, and Goob (briefly succeeded with Wilbur, Carl and Goob, but failed with Lewis).

DOR-15 (pronounced Doris) is the main antagonist of Disney's 47th full-length animated feature film Meet the Robinsons, which is based on the 1990 American children's picture book A Day with Wilbur Robinson by William Joyce.

Her original purpose was to serve as a helper, but she turned out to be a very manipulative and power-hungry entity, teaming up with Bowler Hat Guy in order to achieve her goals.

Her vocal effects were provided by Ethan Sandler.

DOR-15 was originally an invention known as a "Helping Hat", a robotic hat that performed menial tasks for its master. However, though the cause of this thinking is unknown, Doris began to believe she had more potential, demonstrating by exerting mind-control powers over her test subject. As a result, her inventor, who turns out to be the future version of Lewis, supposedly shut her down and sealed her away in a prototype chamber. But Doris rebooted and escaped, vowing revenge on Lewis.

She met future Goob during his attempt to "ruin" Robinson Industries (which ultimately consisted of throwing eggs and toilet paper at the building and shouting, "Robinson, you stink!"), and the two hid out in a girly-themed restaurant to concoct a scheme. Doris proposed using one of the two time machines invented by Lewis, and the two formed a team, thus establishing Goob's identity as the "Bowler Hat Guy".

Doris sabotages Lewis's invention, the Memory Scanner, during the science fair at his school. When everyone evacuates the gym in the ensuing chaos, Doris reassembles the machine, and she and Bowler Hat Guy take it to Inventco to present to the board of directors. Despite Doris aiding Bowler Hat Guy by providing cues from outside the window, the presentation ultimately fails due to Bowler Hat Guy not knowing how to operate the Memory Scanner. It falls apart, but Doris reminds Bowler Hat Guy that Lewis can fix it and show them how it works, so they travel to the orphanage where Lewis lives.

While searching for him, Doris detects samples of Wilbur Robinson's DNA along with "time travel residue", concluding that Lewis went with Wilbur into the future. She and Bowler Hat Guy travel to the future as well and hide out in the Robinsons' garden. Doris instructs Bowler Hat Guy to stay in the time machine, and produces a miniature version of herself for him to pilot.

Doris locates Lewis in the dining room as he is having dinner with the Robinsons, and begins sawing at the chandelier in an attempt to trap him. She is interrupted when Bowler Hat Guy brings a brainwashed T-Rex from the past in an attempt to capture Lewis. The entire family springs into action to rescue Lewis, and Wilbur manages to dislodge Mini-Doris from the T-Rex's head. Mini-Doris is then captured by the frogs and locked in their trunk, presumably deactivating her. Doris returns to Bowler Hat Guy and slaps him with the control panel in her rage.

Lewis attempts to escape with the Memory Scanner, aided by Wilbur and Carl, the family robot. Doris pursues them, destroys Carl and retrieves the Memory Scanner, and she and Goob escape into the past. The future city changes around Lewis, and he finds himself in a dark room with the Memory Scanner. It reveals Goob's success in the past at pawning off Lewis's invention, as well as his additional presentation of Doris. As it turns out, the mass-produced Helping Hats take over the city, which was Doris's plan all along. Goob tried to stop it but was taken to the ground by multiple Doris hats and ether killed or brainwashed by Doris. Doris then appears, her memories having been what Lewis just saw, and sets the entire Robinson family on Lewis.

Lewis hides in the broken time machine, managing to fix it in time and escape. Doris and the Robinsons pursue him in a gigantic construct resembling her. Lewis goes back in time to Goob's presentation to the Inventco board and warns him about Doris's plan. Doris attempts to attack Lewis, but Lewis vows to never invent her, and, with her creation erased from history, Doris ceases to exist, defeating her for good.

DOR-15 simply resembles a black-and-purple bowler hat when dormant or in disguise. However, in her active form, a robot eye appears above the brim. It is usually green, but turns red when DOR-15 is angry or acting evil. Various attachments can protrude from the inside of her hat-like, most commonly spindly metallic legs and/or hand-like metal claws or weapons she can use to attack.

At first glance, Doris seems like a criminal partner of Bowler Hat Guy, being happy to help him ruin Lewis' future by presenting his inventions as his own, including the Memory Scanner and even Doris herself. However, this is nothing more than a façade, as she is actually a manipulator who was only teaming up with him to get her revenge on Lewis, eventually having her Helper Hats attack him when he was no longer useful.

Her reason for this revenge plot was out of an assumption that she was made by Lewis to be a slave to humans, meaning it was out of a petty reason. Doris also gets furious at some moments, such as when Bowler Hat Guy and Mini-Doris brought back a Tyrannosaurus rex from the past, and when Lewis revealed her true intentions. 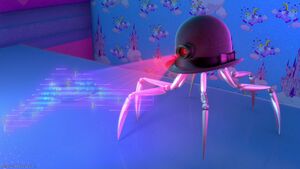 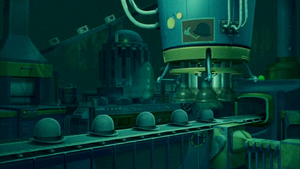 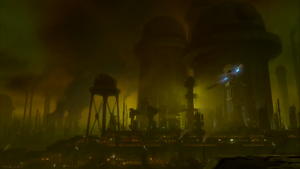 The city ruled upon by DOR-15. 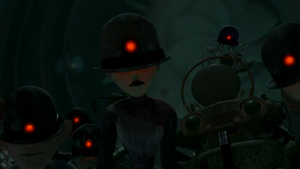 DOR-15's rise to power after enslaving the Robinsons. 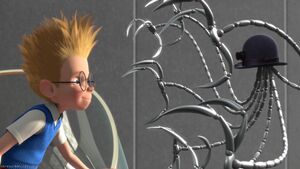 Lewis proclaiming that he will never invent DOR-15. 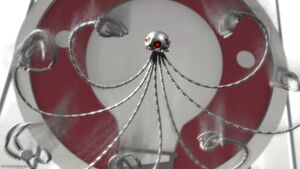 DOR-15's defeat as she is erased from existence for good. 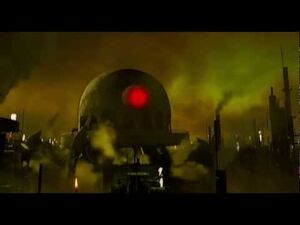 Doris Hat-bot of Meet the Robinsons-2 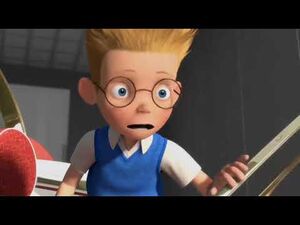