Mocking those subjugated by Lord Orochi.

Immortal Magician
Da Ji, also known as Lady Da Ji, is an evil immortal witch who is a strategic ally of the dark being known as Lord Orochi, and an antagonist from the Warriors Orochi videogame series, a crossover of Samurai Warriors and Dynasty Warriors.

She was voiced by Mami Kingetsu in the Japanese version, and by Stephanie Sheh in the English version.

Da Ji was a runaway immortal that had become bored of her life previously and she eventually found out about the serpent king Orochi. Feeling sympathetic him and believing he could bring her some entertainment, Da Ji freed him from his prison and agreed to serve him.

She became his main strategist, coordinating the advances of Orochi's troops and using a combination of schemes and sorcery in battles to cause confusion amongst the enemy ranks. Da Ji also did some inventing for the serpent king's forces, creating the four enormous cannons located around Orochi's main fortress, Koshi Castle.

As the serpent king brought forth the warriors of the Three Kingdoms era and Warring States period and began fighting them, Da Ji was at his side. With Orochi's dominance complete, Da Ji occupied herself with securing his rule by bringing down the resistance movements that began springing up. However these movements began to join together and began to defeat Orochi's forces, Da Ji soon found that they were too much for even her. She stood by the serpent king in the final battle at Koshi Castle, but after his defeat, she survived and fled. However Da Ji soon encountered a young girl named Himiko, who she realized was the key to resurrecting Orochi and guarded her fiercely. They traveled to find Kiyomori Taira, who also wanted to resurrect the serpent king, but they were pursued by Taigong Wang, one of the mystics who originally defeated Orochi, who joined other factions to try and capture Da Ji. She even put her own safety in jeopardy to protect Himiko so as to ensure the serpent king's resurrection and escaped to serve the returned incarnation of her lord, Orochi X. However she eventually met defeat along with Orochi X.

The two most notable aspects of Da Ji's personality are her skill at deception and her habit of taunting officers subjugated by Orochi by reminding them of his control. She is particularly manipulative, sadistic, and cruel, reveling in suffering and vanity. Da Ji is occasionally referred to as a "vixen" or "fox" by other characters and is fond of her inventions, often getting upset when enemies destroy them or take control of them. Da Ji treats Himiko as a sister, though it is unclear if she is truly sincere and because of this relationship, she particularly dislikes Sun Wukong, because of the monkey king's intentions to steal Himiko. Da Ji constantly refers to her foes as "boy" and has a particular hatred for her rival, Taigong Wang. Usually insults don't bother her unless they come from her rival or Wen Zhong.

Da Ji possesses dark magical powers and her primary weapons are a large pair of levitating orbs that she uses as melee weapons. Her fighting style is much like a ballet dance, emphasizing grace, and her magic powers include the ability to shape shift, the power to fire laser beams from her orbs, and the ability to create a large dark energy pillar. 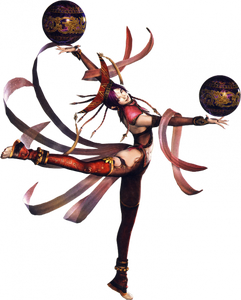 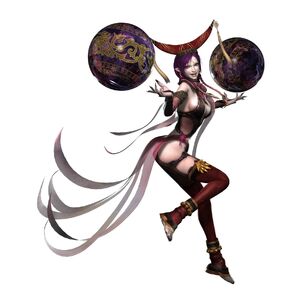 Lady Da Ji.
Add a photo to this gallery

Retrieved from "https://villains.fandom.com/wiki/Da_Ji_(Warriors_Orochi)?oldid=4118278"
Community content is available under CC-BY-SA unless otherwise noted.