Fulfil the Hero Killer's ideology of a new society.

Dabi (in Japanese: 荼毘, Dabi, translated as Cremation), also known as Blueflame (in Japanese:蒼炎 Sōen), is a major antagonist in the manga/anime series My Hero Academia. He is affiliated with the League of Villains and the leader of the organization's Vanguard Action Squad.

Like Himiko Toga and Spinner, he was inspired by Stain and his ideology and decided to join the League, which was believed to harbor the Hero Killer's cause.

He is voiced by Hiro Shimono in the Japanese version, and by Jason Liebrecht in the English dubbed version, who is best known for voicing Zeke Yeager in Attack on Titan.

Dabi is a tall, slender man with spiky, black hair. He has scars all over his body with stitchings on them and appear to be burnt.

His outfits seem to vary from time to time. In his initial debut, he had more of a rough and baggy appearance, wearing a loose belt, a torn jacket and pants that barely reach to his ankles. In later appearances, he seems to wear a slightly different jacket that appears to be stitched together with coattails and rolled up sleeves. He also wears boots now and baggier pants.

Dabi is a rude and argumentative person who has no sense of respect. He introduced himself to Tomura informally, and refused to give out his real name. Nevertheless, he is a calm-minded person, who is always focused and determined to complete his given tasks.

Like Toga, Dabi admires Stain and his ideology. He views himself as the one who is destined to fulfill Stain's view of the world, hence his reasoning for joining the League of Villains. However, even though he does not display any psychotic intentions, it appears that he is still just as deluded as Toga as he seems to be unaware of what Stain was actually trying to accomplish. While Stain was trying to bring back the meaning of being a hero, Dabi is simply interested in destroying the current society of humanity as a whole.

Dabi can also come across being very derisive and contemptuous to his teammates, who he finds crazy as he proclaimed Himiko insane, called Tomura freaky and insulted Spinner's driving skills.

Dabi first appears in The Aftermath of Hero Killer: Stain, where he is shown to be watching a news broadcast about Stain's capture.

Later on, Dabi and Himiko Toga are recruited by Giran to join the League of Villains. The two then meet Tomura Shigaraki, who Dabi comments on about his gross appearance. Displeased, Tomura immediately demands Kurogiri to get rid of them, but he refuses as he wanted Tomura to at least hear them out. Giran then begins the introductions. After Himiko's introduction, Giran introduces Dabi as a criminal who hasn't committed any major crimes and that he follows Stain's ideology. Dabi was not on board with the League of Villains, questioning about the league's motivations and was displeased of seeing the possibility of Himiko Toga joining.

Tomura asks for him to introduce himself, in which he does, but refuses to give out his real name. When Dabi brings up Stain's ideology, Tomura becomes extremely frustrated and attempts to kill him and Toga, but Kurogiri managed to prevent this from happening. Tomura then leaves the building, who Dabi comments about how sickening he is.

Together with the Vanguard Action Squad, Dabi observes the campsite of U.A. While Toga bickers about her mask and Muscular wishing to rush in, Dabi tells everyone to remain silent and wait for everyone to arrive. Once all ten members arrive, Dabi begins to take the lead by burning down the forest.

Dabi then takes on Shota Aizawa, catching him off guard. Aizawa was able to evade his attack, however and was able to successfully capture him after a quick battle. He then begins to interrogate him, but Dabi begins to turn into liquid and dissolves away. It is later revealed that was a clone and that the real Dabi was with Twice, who had made a clone of Dabi to keep the heroes occupied for the time being. Dabi then orders him to make two more clones to keep Aizawa busy again.

After Mr. Compress captures Katsuki Bakugo, Dabi waits for everyone to arrive before making their escape. Eventually, everyone arrives, including Toga, bringing back one sample of blood from one person, much to Twice's disappointment. Dabi eventually spots the remaining heroes chasing after them and attempts to hold them off once more while Toga and Twice battle them. Mr. Compress eventually reaches to him, but without the marbles.

Kurogiri then begins to open a portal for the Vanguard Action Squad to make their escape. They ultimately failed at capturing Fumikage Tokoyami, but successful in capturing Bakugo.

Dabi and the rest of the league are later present in the hideout, where they observe Tomura welcoming Bakugo to the team. The group of villains watch U.A.'s public apology regarding the villain attack on the camp. While Tomura explains to Bakugo that the League of Villains are aiming for a just society, Dabi sends Twice to free Bakugo from his restraints under Tomura's orders.

Once Bakugo is freed, he immediately attacks Tomura, refusing to accept their delusional ideology. Despite this, the villains are not afraid of him, with Dabi even thinking that he's a fool. Eventually, All Might, leading a group of heroes and the police charge into their hideout and restraint the villains. However, the villains are suddenly saved by All For One, who uses Kurogiri's Quirk to create a warp gate for them to escape.

After All For One's defeat in the hands of All Might, Dabi begins searching for recruits for the League of Villains. He comes across a group of low life thugs that act hostile towards him, only for him to kill them, thinking of them as nothing but trash.

Dabi later accompanies Tomura, Spinner and Mr. Compress in capturing Kai Chisaki. The Pro Hero, Snatch, attempts to fight them off, but is eventually trapped in a marble by Mr. Compress, containing his fire. Mr. Compress asks Dabi if he is going to die. Dabi claims that only his upper half was composed of sand and was unsure whether he'd die or just be heavily injured. After Tomura finishes humiliating Chisaki and taking his Quirk bullets, he takes his leave with the rest of the villains.

Dabi is first seen giving out orders for High-End to accomplish. After High-End was defeated, Dabi eventually confronted Endeavor himself, surprised by the results of the battle. With his vision blurred out, Endeavor can barely recognize him, but from his voice, he can tell that Dabi is the one responsible for killing the Pro Hero, Snatch. Dabi unleashes his flames, trapping him, Endeavor and Hawks in a wall of flames. With the two heroes weakened, Dabi takes the opportunity to kill them, but he is stopped by the No. 5 Pro Hero Miruko. With her being present, Dabi forces himself to flee the area by calling out for Ujiko, but not before he calls out Endeavor's full name, planning to talk with him another time.

Some time later, Hawks meets with Dabi, revealing himself to be associated with the League of Villains (in reality however, Hawks was a spy sent from the heroes to gather info on the villains). Hawks is mad to find out that the Nomu, High-End, attacked today at the city and not tomorrow at a nearby factory. On top of this, he noticed that High-End was much different compared to previous Nomus. Dabi told him he changed his mind and that he wanted to see High-End's capabilities. Dabi tells him it's not wise for him to place his trust on him and he was testing to see if Hawks was truly on his side. Eventually, the two depart their own way, with Dabi saying that though he won't let Hawks see the boss yet, he plans to contact him again.

Dabi is later seen at a dock nearby and begins to remember who Endeavor was talking about. He rubs his eyes which begins to drip out blood as he recalls when Snatch asked if he ever thought about the families of his victims, stating that he thought about them so much it drove him crazy.

Prior to the events of the Hero Billboard Chart JP, Dabi continued his search for more recruits to join the league, only to kill them back and forth as he struggled to find those that had any value. Making no progress, he eventually returned back to the hideout, in which he questioned why everyone was gathered up here instead of searching for new recruits, only for Toga and Twice to mock his actions at recruiting people. He later participated in battling Gigantomachia with his fellow league, only for them to lose.

Dabi and the rest of the villains were then transported to the doctor's hideout and noticed the amount of Nomus contained and how different they looked. Soon, the doctor revealed himself and introduced himself as Daruma Ujiko. After hearing Tomura's motive, Ujiko agreed to help him, as long as he can tame Gigantomachia. Dabi refused to take part and was more invested on searching for recruits instead, only for Ujiko to request for Dabi to test out the High Ends, though Dabi showed no interest in that either.

Dabi later accompanied the league after Tomura received a call from Rikiya Yotsubashi to challenge the Meta Liberation Army and rescue Giran from their clutches and took part in the battle. 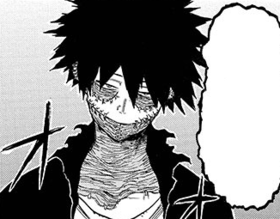 Dabi in the manga. 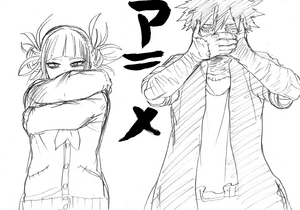 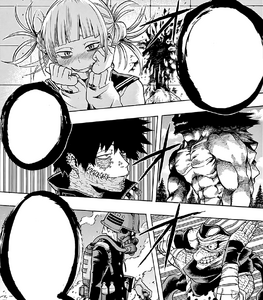 The villains gathering together. 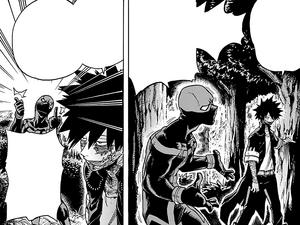 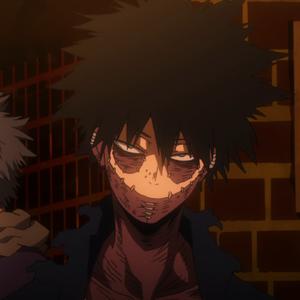 Dabi in the anime. 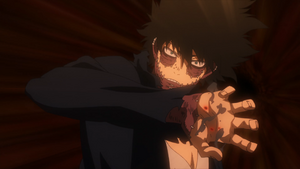 Dabi prepared to use his Quirk. 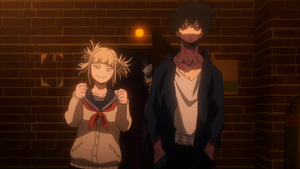 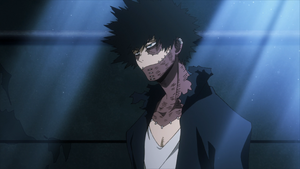 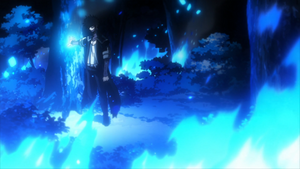 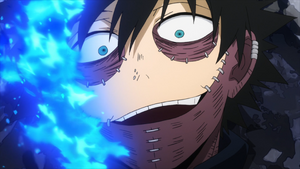 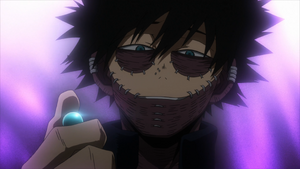 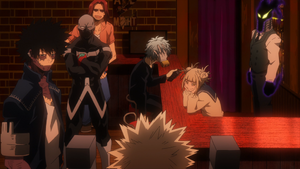 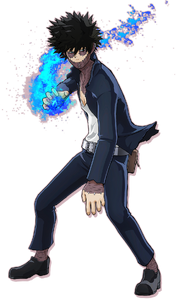 Dabi In My Hero One's Justice. 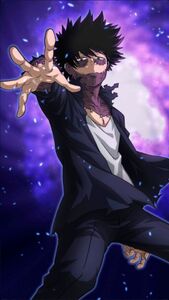 Dabi's Smash Tap artwork.
Add a photo to this gallery 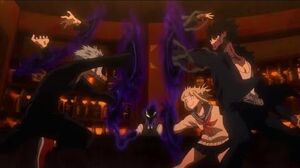 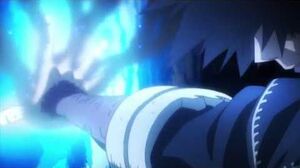 Shoto Todoroki's Brother is a VILLAIN?! (My Hero Academia Boku no Hero Secret Family Dabi Theory)
Add a photo to this gallery

Retrieved from "https://villains.fandom.com/wiki/Dabi?oldid=3398242"
Community content is available under CC-BY-SA unless otherwise noted.