Founder and Grandmaster of the Red Dragon Clan

Ruling over the Red Dragon clan.

Daegon is the younger brother of Taven and the main villain of the Konquest mode which has many villains with the likes of Shinnok, Shao Kahn, Scorpion and Blaze.

Daegon makes his first appearance in the Red Dragon Caverns where Taven fights his Red Dragons and is asked what he is doing in the caves. Daegon explains to Taven that he formed the Red Dragon Clan many ages ago and that the caves were his stronghold. Mavado then appears and tells his master that the firespawn Blaze had been found. Daegon is most excited over the news and leaves for his chamber, but not before ordering Mavado to kill his older brother.

Mavado failed the task and Taven chased Daegon down to the Netherrealm where Daegon was hiding in Shinnok's spire. After Shinnok convinced Taven that his brother had fled to Earthrealm and sent him there, Daegon came out of hiding. Shinnok expressed his disappointment in Daegon, claiming his older bro defeated his apparitions more quickly than Daegon did. "Perhaps I am aiding the Rome brother" said Shinnok as he slapped Daegon down. On the bright side, Shinnok has told other villains of the grand prize of defeating Blaze, hastening their anticipation, but had planned for Daegon to claim the prize and defeat Blaze.

Daegon was then sent to Edenia where Quan Chi mentioned him as one of "their [villains'] allies".

Daegon then dropped by in the Netherrealm once again in Scorpion's lair where the Shirai Ryu leader was just defeated by Taven. Daegon said he had hoped Scorpion would've had killed Taven and spare him the efforts, but then Blaze appeared and stopped the two brothers from killing each other, claiming there was disturbance amongst the realms and that they were not at the Edenian crater they were suppose to be.

Blaze teleported the two brothers before the crater but Taven still proved to be much more for Daegon, defeating him and leaving him on the ground.

Daegon later got up and joined his fellow villains in the Battle of Armageddon, but died along with most of the villains.

Daegon is seen in background of The Pit II sometimes fighting Kenshi, Sareena, Reiko or Frost.

While the Red Dragon Clan aided Havik and Reiko in their quest to claim Shinnok's amulet for Quan Chi. Which the two plan on using to betray the him and use it for themselves. Daegon doe not appear in the comics until later when Goro who lost his arms at the hands of Kotal Kahn needs aid from both Daegon and Onaga. Daegon agrees to help the former Sohkan prince regain his arms, title, his power rule and everything he had lost. With the Dragon King Onaga's ability to heal and regrow limbs Goro manages to get his arms back after the might Shokan reveals Kenshi to Daegon. The two form an alliance for unknown future events as the comic book series ends with a cliffhanger. While Daegon was wounded.

A flashback of Daegon is shown in Kenshi's arcade ending as he is mentioned by his brother Taven in Mortal Kombat X. After freeing Taven with his help Kenshi and Takeda learn that Daegon was responsible for Suchin's death. After learning the truth Kenshi and Takeda decided to help Taven as they prepare to taken on Daegon and the Red Dragon Clan. While Suchin's husband and son get ready to face Daegon, the leader of the Red Dragon Clan also prepares for his plan that he made years ago in Mortal Kombat Comics when he aided Goro.

Although Daegon and his brother Taven don't appear in the game they are mentioned by Cetrion she says that it's up to the two brothers to balance out good and evil and no eelse's job. While Daegon worships and serves the Dragon King Onaga like the rest of the Red Dragon his master is mentioned a few times by other fighters they know that Onaga is going to eventually return . Before the events in Mortal Kombat 11 Daegon killed Kenshi Takahashi's wife which was mentioned in the Mortal Kombat X comics and the Mortal Kombat game. Kenshi wanted revenge on Daegon and the Red Dragon Clan for the death of his wife but he also wanted revenge on Shang Tsung for taking his eyes. Since Kenshi's body can be found on Shang Tsung's Island in the DLC the Krypt he wasn't successful in getting justice for his wife's murder or for Shang Tsung blinding him. Before Mortal Kombat 11 Goro lost his arms in battle against Kotal Kahn so he went to the Red Dragon and Daegon for help he wanted Onaga's abilities to regrow limbs and was successful because when Goro's body is found on Shang Tsung's Island he has all of his arms.

The battle that Kotal Kahn had with Goro in the comics is mentioned in the Mortal Kombat 11 game. Since that is confirmed that means the deal that Goro made with Daegon, the Red Dragon and Onaga also happened as well.

Daegon has superhuman abilities and can call on the element of fire. Many of his attacks involve him avoiding attacks, such as one attack where he rolls to avoid projectile attacks and then uppercuts his opponent and another one where Daegon spins backwards to avoid an attack and then thrusts forward with a powerful punch. 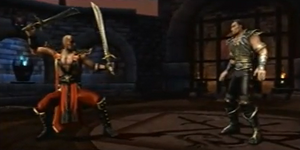 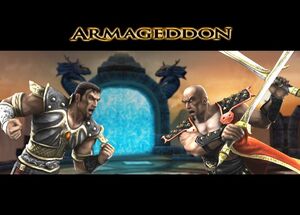 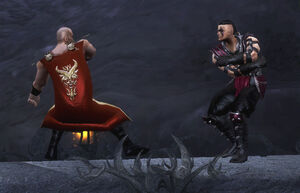 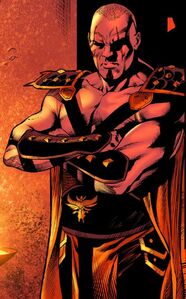 Taven's backstoy of how Daegon kills their father Argus in Mortal Kombat X.

Taven's backstory about how Daegon kills their mother Delia in Mortal Kombat X,

Taven fighting Daegon on a Kombat Kard Background in the Mortal Kombat X. 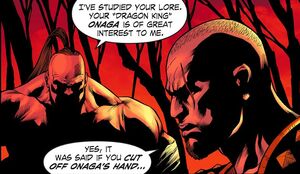 Goro and Daegon mention the Dragon King Onaga in the Mortal Kombat X comic book series.
Add a photo to this gallery

Retrieved from "https://villains.fandom.com/wiki/Daegon?oldid=4264567"
Community content is available under CC-BY-SA unless otherwise noted.