One of the Severn Great Demon Lords

To move on to the human world (Digimon V-Tamer 01).

Daemon is a Mega Level Digimon that resembles a cloaked winged humanoid. He also has a second form in which he doesn't wear the cloak and his body is revealed.

In this form, the claws on Daemon's wings are longer. He has marking on his body, and his left arm is longer than his right.

Lord Demon, a mutant monster, is one of the main antagonists and the one responsible for all the chaos in the Digimon World. This Daemom plans to move on the human world once his war is won and the Super Ultimate egg he's incubating hatches and matures.

He has the ability to alter the arrangements of zeroes and ones that make up the foundation of the Digimon World, and by doing so he is able to turn digimon and human alike to his cause. He believes he can cause similar chaos among humans in the analog world by spreading a virus among them once he leaves the Digimon World.

During the Christmas holiday, Daemon shows up right after the Digidestined return from the world tour. Daemon wants the Dark Spore inside of Ken for unknown reasons. During the show he has three henchmen: SkullSatamon, LadyDevimon, and MarineDevimon. He is extremely powerful, and Imperialdramon Figher Mode, Silphymon, and Shakkoumon couldn't beat him with their combined efforts. While Imperialdramon was holding off Daemon's Evil Inferno attack, Ken used his Dark Digivice to open a gate to the Dark Ocean, and Imperialdramon, Silphymon and Shakkoumon defeated Daemon by trapping him into the World of Darkness, imprisoning him forever. He is presumed entering in conflict with Dragomon and one of the two (Daemon presumably) will be destroyed.

In the video game Digimon World Data Squad, Daemon is known as Creepymon, and is apparently the right-hand of the Seven Great Demon Lords. He was created by the Code Key Wrath, and a child the filled with wrath.

This Evil Digimon is one of the "Seven Great Demon Lords", representing Jupiter and the sin of Wrath. He leads the many Devil and Fallen Angel Digimon, and like Devimon, he was originally an Angel Digimon, and a particularly authoritative and high-ranking one. He is said that before it fell to the Dark Area and became a blasphemous Demon Lord Digimon, it was actually Seraphimon. However, because it raged in fury or rebellion, against a being of goodness in the Digital Worl), it was deleted to the Dark Area. It has vowed to one day conquer the Digital World, in revenge against the being of goodness. Also, while it led the rebellion, and was the strongest among the Megas, it plotted to secretly revive the "Ultra Digimon". The characters on its anklet read "010", four times. 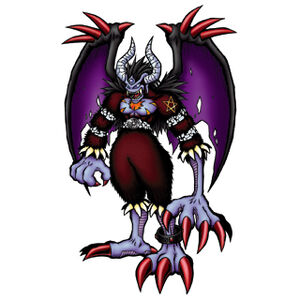