Daffy is the youngest of the New Batch of Gremlins and one of the titular major antagonists (along with George and Lenny) in the 1990 film Gremlins 2: The New Batch. He is crazy and a completely nutty gremlin, even more so than any other member of his species, he is easily recognized thanks to his his large, round eyes, which whirl constantly in a chaotic manner. He is hyperactive and has a mad sense of humour, and is constantly laughing hysterically.

As a mogwai, his fur was quite patchy; being mostly orange and brown with a white belly and beard, he also had a loopy tuft of fur atop his head. His most recognizable features are his massive orange eyes, which constantly swirl and spin around.

His gremlin self is a lighter shade of green than most gremlins, and retained a few thick yellow strands of "hair" that hang limply in the manner of the original incarnation of Daffy Duck from his Mogwai self. 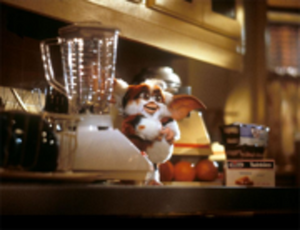 Retrieved from "https://villains.fandom.com/wiki/Daffy_(Gremlins)?oldid=3889559"
Community content is available under CC-BY-SA unless otherwise noted.