Kill the queen of the forest (both failed).

Dagda is Mandrake's Boggan son and the secondary antagonist of the Blue Sky's eighth animated feature film Epic, despite having little screen-time.

He was voiced by Blake Anderson.

His father Mandrake was the ruler of the dark parts of the dead forest, known as the Decay.

Years later, Dagda is rank general and commands the Boggans under his father's order. He returns to the Dark Decay Kingdom and showing his new pelt during his patrol, he found a disgusting rat and kill it to be like his father. Mandrake tells him of his scheme to kill the Queen of the Forest and approved his pelt that suit him, leaving himself proud of dad's compliment.

He helped his dad out in trying to get the flower from Queen Tara. He shot two arrows at Ronin and the queen. Ronin grabs the second arrow and shoots it at Dagda, causing him to fall to his death. Mandrake fires an arrow that hits the Queen in the stomach, before flying towards his son in an attempt to save him.

Dagda is also known for being kind, cruel, jealous, confident, traitorous, prejudicial, temperamental, unscrupulous, loathsome, sadistic, persuasive, contemptuous, and flattering to his father, always proving his worth as the Dark Prince and improving his skills as a Boggan. Also, he is extremely appreciative and loyal to his father and insane enough to kill a rat to make a pelt for himself.

Like his father, he is a dangerous warrior of the Boggans and capable to kill powerful beasts on his own like the rat he encountered and killed as his prized pelt coat. Also, a great aerial mounted soldier and excellent archer of the Boggans. 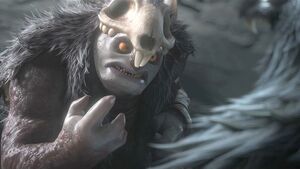 Dagda telling his dad that they will make the Leafmen pay. 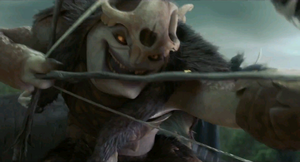 Dagda's demise.
Add a photo to this gallery

Retrieved from "https://villains.fandom.com/wiki/Dagda?oldid=4270573"
Community content is available under CC-BY-SA unless otherwise noted.