Ruler of the Undead Legion

To free himself from Nulgath.

Dage the Evil is the Dark Lord of the Undead Legion and a villain in AdventureQuest Worlds. Dage the Evil is currently hiding out in Shadowfall, willing to give players who find him an upgrade of their Undead Warrior armors they bought for AC's after they pass a series of trials set up for them by himself. He has a long-standing rivalry with his former master, the Abyss General, Nulgath.

Dage was once a king, and a power-mad necromancer who signed Nulgath's contract and rode the fast lane to even more strength. Eventually the time came for Dage the Evil (like all others before him) to pay for the contract that Nulgath gave him. Dage used his knowledge to bind part of his soul to an armor of his construct. The remnant lives on in that armor and still remembers it's past life.

After reality is restored from the alternate timeline caused by Drakath, Nulgath and Dage the Evil catch up to the group as Gravelyn tells them, Sally, and Noxus that the Shadowscythe Army will hunt down Drakath and make him pay for what he did to Sepulchure.

Dage the Evil later goes to war against Nulgath. Dage is served by his general Rogath, his mad scientist Laken, the Blade Master, and Undead Legend. Dage's army consists of Skeletal Warriors, Skull Warriors, Undead Infantries, Undead Bruisers, and Legion Fenrirs. Dage the Evil managed to secure the Oblivion Gate and traps Nulgath in the peaceful part of the Underworld. Nulgath claims that Dage the Evil unknowingly left him a gift as he begins his next plot.

Dage the Evil is "Dage the Good" who has become the undisputed champion of all things good and noble ever since the archangel Nulgath was sucked into an alternate dimension while trying to seal a rift.

In the alternate timeline caused by Drakath, Dage the Evil, Noxus, and Nulgath join Zombie King Alteon into bowing before Sepulchure after he managed to slay Death and cause everyone who recently died to return as Zombies that obey his every command.

Dage, Nulgath and Noxus bowing down to Sepulchure in AQWorlds: Zombies. 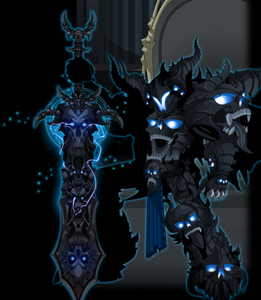 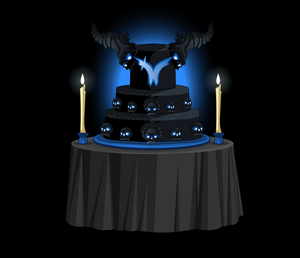 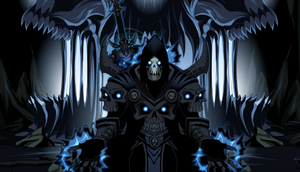 Dage the Evil in his past appearance.
Add a photo to this gallery

Retrieved from "https://villains.fandom.com/wiki/Dage_the_Evil?oldid=3496479"
Community content is available under CC-BY-SA unless otherwise noted.