Exact vengeance upon all who abandoned and/or convicted her.

Dahlia Hawthorne is the central antagonist of Phoenix Wright: Ace Attorney: Trials and Tribulations. She is a selfish and heartless serial killer who uses her sweet demeanor and appearance to manipulate people.

Born to Morgan Fey, who was to become the head of the Fey Clan, Dahlia and her twin sister, Iris, were taken by their greedy father, who divorced Morgan after her younger sister, Misty, became the head instead. He eventually remarried, but the new wife already had a daughter of her own, Valerie. Seeing her own twin as a nuisance, Dahlia convinced him to leave Iris at a channeling dojo called Hazakura Temple. At the age of 14, Dahlia and Valerie conspired to steal a two-million dollar jewel from their father with the aid of Terry Fawles through a phony kidnapping: Terry was to be the "culprit" responsible for abducting Dahlia, and Valerie, who had been promoted to detective, was to make the exchange. After Fawles had the jewel, she would run away with him. But when the time came Dahlia threw herself into the Eagle River (with the diamond) in an attempt to cut Terry out of the deal. Her body was never found, and Fawles was tried and convicted for her murder. Dahlia actually washed up on the river bank at Hazakura, where her sister discovered her and nursed her back to health.

Five years later, Terry Fawles escaped from a band wagon and phoned Valerie to meet him at Dusky Bridge. Because he had spent five years in jail, he had forgotten what Valerie looked like, so he instructed her to wear a white scarf. Dahlia, hearing what Valerie intended to do, committed her first murder by stabbing her step-sister in the back and placed the body in the trunk of a car that was stolen by the fugitive Fawles. During the trial, Dahlia appeared under the alias "Melissa Foster" testifying against Terry Fawles. Before attorneys Mia Fey and Diego Armando could bring her to justice, Terry Fawles poisoned himself due to a promise he and Dahlia made: if neither one could trust the other, then they had to drink the poison in the bottle. As a result, Terry Fawles died, and Dahlia Hawthorne walked out of the court a free woman.

Six months later, Dahlia met with Diego and poisoned his coffee with the same poison that had killed Terry. She handed the poison vial, which was actually a pendant she wore as a necklace, off to Phoenix Wright so that she wouldn't be caught with it. She intended to kill him later and get it back, but Iris begged her to spare his life, promising to get the necklace back herself. Dahlia waited eight months for Iris to do so, but when she failed, took matters into her own hands and tried to kill Phoenix herself. On April 9, Dahlia stole Phoenix's beloved cold medicine (Coldkiller X) and poisoned it so she could kill him. However, when she discovered her ex-boyfriend, Doug Swallow, talking to Phoenix about her, she panicked and decided to kill Swallow instead and frame Phoenix for the murder by planting the poisoned cold medicine in the victim's hand. At the trial, however, she was caught and exposed by Mia Fey, who was out to avenge Diego Armando. Before she received her sentence, Dahlia promised Mia that it was not over between them.

Bridge to the Turnabout

Five years later, Dahlia was executed by hanging, but not before her mother, Morgan, who had been imprisoned due to her involvement in an earlier murder, informed her about a plan to kill Maya Fey, Mia's younger sister, by having Morgan's youngest daughter, Pearl Fey, channel Dahlia's spirit, so that Pearl could become the next master of the Fey Clan. Dahlia only agreed to go along with the plan because she wanted to have her revenge against Mia, who had been killed two years earlier. After five years in a coma, Armando woke up and heard about Mia's death by Redd White, but blamed it on Phoenix Wright for letting her down. He changed his name to Godot and became a prosecutor to follow Wright and defeat him in court. However, he heard about Morgan's plan and called both Iris and Maya's mother, Misty Fey (who was under the alias of "Elise Deauxnim"), to channel Dahlia before she could be called through Pearl. Misty channeled her according to plan, but when she tried to kill Maya, Godot saved her by killing Misty on the spot with her own sword. Afterwards, Maya was told by Mia, who Maya had channeled, to lock herself in the nearby temple and channel Dahlia into her own body. Dahlia later posed as Iris and tricked Wright in court to believe Maya was dead, not knowing the truth herself. However, Wright figured out the truth and, after much effort, exposed Dahlia's lies. Finally, when Dahlia said she couldn't be punished because she was already dead, Mia (who was being channeled through Pearl) said she already received her punishment by being herself, a "pitiful creature living in defeat". She then immediately left Maya's body and, according to Godot, returned to the Hell she came from.

Initially, Dahlia Hawthorne appeared to be a sweet, graceful, demonstrative, and angelic young woman, easily gaining the attention (and affection) of any man she came across. This, however, was merely a façade; in reality, she was as cold, cruel, arrogant, and manipulative as they came, not caring for anyone or anything but herself. She used her "sweet and innocent" persona to gain the loyalty of others, namely a college student named Phoenix Wright and a tutor named Terry Fawles, and bend them to her will - the latter was even willing to commit suicide for her, and did so while on the witness stand.

Even though she was eventually found guilty and executed for her second murder (her ex-boyfriend, Doug Swallow), not even death could hold back her evil; Dahlia's spirit later returned to torment Wright and her relatives in the Fey clan in a scheme that resulted in the murder of the mother of her nemesis Mia Fey, and endangered the life of Mia's sister, Maya. Fortunately, both Phoenix and Mia defeated her again with a breaking speech, which broke her so bad she left Maya's body and her spirit was sent to Hell forever.

In "Turnabout Memories", she begins pronouncing Mia's name in anger, then turning her head to the camera, her eyes glowing in wrath while the butterflies that usually surround her burst into flames. In "Bridge to the Turnabout", when Wright finally corners her, she lands her head on the stand while holding it with her hands. She then screams in agony while her spirit leaves Maya's body, its hair flowing in every direction like fire and its eyes glowing evilly. She then disappears in a burst of blue flames in the shape of a Magatama while images of her crimes flash behind her. 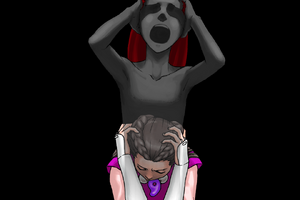 Retrieved from "https://villains.fandom.com/wiki/Dahlia_Hawthorne?oldid=2440644"
Community content is available under CC-BY-SA unless otherwise noted.