Trying to wipe out all the Kamen Riders and Super Sentai

Imperialists
Dai-Zangyack (in Japanese: 大ザンギャック) is one of the two main antagonist factions of Kamen Rider × Super Sentai: Super Hero Taisen. They are a large fleet led by former member of the Red Pirate Gang and Gokaiger Emperor Marvelous. Under his command are several of the villains that the Super Sentai teams have defeated. With this fleet, Marvelous has a new goal, the Greater Power of the Kamen Riders and their universe's Greatest Treasure. This goal pits him against Tsukasa Kadoya/Decade and his Dai-Shocker army, as well as putting the greater Super Sentai and Kamen Rider communities right in the middle.

Later on, Dai-Zangyack and Dai-Shocker secretly unite behind Emperor Marvelous and Tsukasa Kadoya's backs to form the Shocker-Zangyack Alliance and reveal that they were only using the two to achieve their true goals to defeat both the Super Sentai and Kamen Riders and rule the world.

Comprised of various revived past foes of the Super Sentai, under the leadership of Emperor Marvelous, Dai-Zangyack waged a crusade to wipe out all of the Kamen Riders, provoking a resurgent Dai-Shocker, once again led by Tsukasa Kadoya, to go after the Super Sentai. Secretly, the true wirepuller behind Dai-Zangyack was Rider Hunter Silva, who was conspiring with Doktor G of Dai-Shocker (in actuality a disguised Narutaki) to wipe out both the Kamen Riders and Super Sentai.

Eventually, after Gokai Red and Decade lead the remaining Kamen Riders and Super Sentai to destruction against one another, they are betrayed by the Dai-Zangyack and Dai-Shocker forces, who reveal their alliance. However, Marvelous and Tsukasa reveal they knew about the Shocker-Zangyack Alliance's plans all along and were only playing along in order to find out their master plan, to create the Big Machine by combining the Super Crisis Fortress with the Gigant Horse. Revealing that none of the Kamen Riders or Super Sentai were actually killed but instead sent to a pocket dimension, Marvelous and Tsukasa summon all of the Kamen Riders and Super Sentai to do battle with the armies of the Shocker-Zangyack Alliance.

Name-wise, Dai-Zangyack's name has the same format as Dai-Shocker, the name of a villain group from a certain series with "Dai"added on the front. However, there is an inverse in that while Dai-Zangyack takes its name from the villains of the recent Gokaiger, Space Empire Zangyack, Dai-Shocker takes its name from Shocker, the villainous organization of the original Kamen Rider series. Of course, if Sentai were to follow that name, this alliance of evil would instead be known as the Dai-Black Cross Army.

Dai-Zangyack and indeed Dai-Shocker, were predated by the United Alliance of Evil, first mentioned in Power Rangers Zeo and uniting in full force in Power Rangers In Space, an evil alliance made up of the villains of the first six years of Power Rangers. 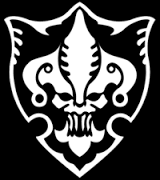 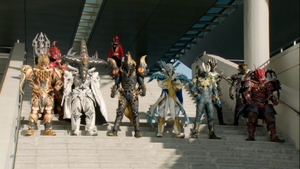