Turn Earth into a wasteland (Zyuranger).

Get revenge on the Sentai teams (Strongest Battle).

Dai Satan (sometimes commonly spelled "Dai-Satan"), also known as "Great Satan", is a mysterious devil-like entity with god-like dark powers who appears as a giant floating blue-skinned head with spiky hair and he is the overarching villain of Kyoryu Sentai Zyuranger.

Dai Satan is the one behind the extinction of the dinosaurs, having given Bandora the power to carry out the genocide in exchange for her soul. His true goal is to render Earth an inhospitable wasteland.

Dai Satan later reappears as the ultimate and final antagonist of the 4-part special Super Sentai Strongest Battle, where he is revived by Rita.

At the beginning of the world, Dai Satan battled Ultimate Daizyujin with the demon banished into another dimension while his divine opponent was splintered into the seven Shogozyu.

When Bandora, who was once the only known queen of the now-extinct human-like fairy culture known as the Dahl Tribe in the Earth's distant past, lost her son 170 million years prior to the series, she traded her soul to Dai Satan for the power to destroy the dinosaurs out of revenge and lay waste to Earth.

In the series, Bandora uses a strange monument called Satan's Tower in a dangerous magic ceremony to summon her master to help upgrade her Doramonster ZombieFranke into SatanFranke. After Satan Franke was killed by Zyutei Daizyujin, the Zyurangers used Ultimate Daizyujin to drive Dai Satan off.

In the finale, Dai Satan brought Bandora's son Kai back to life to cement the deal.

After Bandora used her magic to make King Brachion sink into the ground, she used Satan's Tower to summon her master once again and helped to recreate DoraTalos, who Kai used to severe Daizyujin's left arm and half of Dragon Caesar's tail.

Dai Satan was destroyed by Ultimate Daizyujin in the finale just before doing away with Kai and DoraTalos forever.

Dai Satan returns after he is revived by the strange guardian witch named Rita. However, he is defeated again by the Oddball Team comprised of GokaiRed, ToQPink, NinninRed, ZyuohEagle and Sasori Orange. 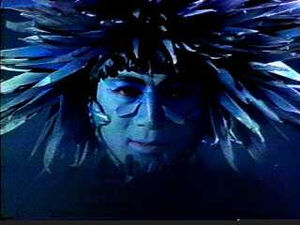 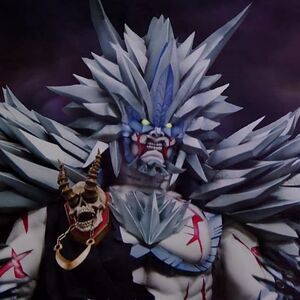