Member of The Three Beast

Exterminate all the forces of the revolutionary army, incriminate Night Raid

Daidara was a villain in Akame Ga Kill!. He was one of the member of the Esdeath army; The Three Beast. He was a fanatic battle that would fight anyone who looked strong enough for him to become stronger in fighting battles, and always had every opportunity to improve himself when he could.

He was voiced by Anri Katsu in the Japanese Dub and by legendary voice actor Chris Ayres in the English Dub.

He first appeared attack and assassinate former Prime Minister, along with the Liver and Nyau. Later, they are ordered by Esdeath to assassinate another political rival in a cruise ship for orders Honest. There they found Tatsumi and Bulat. He fights Tatsumi, however Bulat appears and easily defeats him, cutting him in half brutally.

The Teigu of Daidara is a double-edged ax Teigu, Belvaac. After he is dead, Night Raid takes possession of the Axe. Later, head to the HQ takes Teigu Revolutionary Army.

His Teigu requires its user to have high resistance, this means that their strength is quite high, although he lost easily 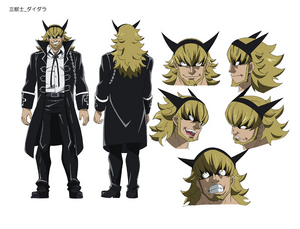 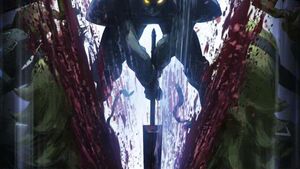 Bulat kills Daidara in half 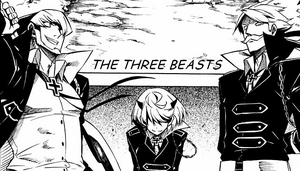 Retrieved from "https://villains.fandom.com/wiki/Daidara?oldid=4063786"
Community content is available under CC-BY-SA unless otherwise noted.