Spewing crushed ice from its mouth

Daipenmon is a minor villain in Digimon Fusion. He is controlled by Lilithmon.

Daipenmon first appeared as frozen in ice. Lilithmon helped defrost him and to replace IceDevimon for her comrades. IceDevimon was trapped in the giant blue popcicle.

After Akari told Lilithmon off and swiped the Code Crown at her, she angrily "explodes", forcing IceDevimon and Daipenmon to f﻿use into their hybrid advanced enchancement form. The IceDevimon/Daipenmon hybrid was then killed by Shoutmon X4K.

Daipenmon is an Advance Hybrid Level Digimon that resembles a colossal purple penguin wielding two popsicles as his weapons, and has an ice cream-like spinner on his head.

In this form Daipenmon absorbed IceDevimon. Here Daipenmon has IceDevimon's wings, horns, feets, and bat markings. He also has vampire-like fangs and belts strapped onto his waist and arms. 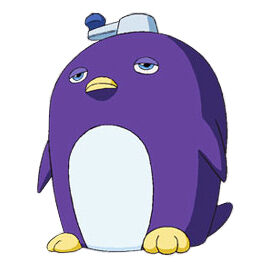 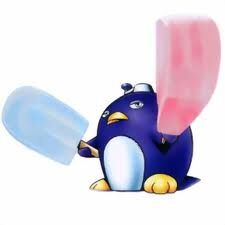