Dummy (by her brother)
Diabolical Bitch
Tramp
The Prisoner
Bitch

Fugitive from the Law

Daisy Domergue is the main antagonist of the 2015 epic western Tarantino movie The Hateful Eight. She is the sister of Jody and member of his gang. She is a fugitive wanted dead or alive, with a ten thousand dollar bounty on her head.

She was portrayed by Jennifer Jason Leigh, who also portrayed Hedra Carlson in Single White Female.

As a dangerous murderer and gang member, she was escaping from the law. At some point, she was captured by John Ruth, who wanted to collect the ten thousand dollar bounty on her head. However, instead of delivering her dead, John instead cuffed her to him, planning to deliver her to Red Rock alive to see her hanged. Her brother Jody, the leader of their gang, set an ambush at a cottage, knowing that Ruth would pass there on his way to Red Rock.

Shelter at the cottage

Seeking Shelter from an upcoming blizzard, Ruth with Domergue, accompanied by O. B. Jackson, Major Marquis Warren and Chris Mannix arrive at the cottage, where they are snowed in with Bob, Oswaldo Mobray, Joe Gage and General Sanford "Sandy" Smithers. When they plan to eat, Ruth frees Domergue from her cuffs but threatens to kill her if she tries something funny.

While Warren, fed up with Smithers' racist remarks and disrespect, goads the ex-general to attack him, killing him in 'self-defense', Daisy watches Douglas poison the coffee while everyone is distracted. She asks John for his permission to take the guitar. He lets her, and she plays the guitar and sings, smiling when she sees John and O.B. drink the poisoned coffee. John then walks towards her, telling her that she sings well and asking her for another song. But when he realizes that she is insulting him in her song, he takes the guitar, smashes it and sits down next to her, re-cuffing her to himself. She objects, knowing that she'll soon be chained to a dead man, but John cuffs her nonetheless. Seconds later, he vomits a swallow of blood. Shocked, he looks first at his cup, then at Daisy who tells him, that when he get's to hell, to tell them that Daisy sent them.

Furious, he smacks her into the face, causing her to fall of the bench. Ruth then forces himself upon her, severely smacking her into the face, knocking out her front teeth. However, she only laughs and spits her teeth in his face, even still laughing when Ruth vomits up a swallow of blood right into her face. Fending him of until he is weakened enough, Daisy then takes Ruth's gun and shoots him point blank into the chest, killing her captor.

While Warren then rounds up the rest of the people against the cottage's wall to find out who poisoned the coffee, Daisy searches Ruth's bags for the key to her handcuffs but Warren sees that and takes the key from her, throwing it into the fire. This causes Daisy to fall into a violent outburst of rage, calling Warren a black bastard and telling him that she will enjoy watching him die. Warren responds by telling her to be careful, as she just killed the only one intending to bring her to Red Rock alive.

After exposing Bob as a fraud and killing him, Warren knows that there is still an ally of Domergue left as Bob couldn't have poisoned the coffee. To find out who it is, Warren threatens to pour the poisoned coffee down Daisy's throat which leads John Gage to reveal himself as the poisoner. Jody, who has been hiding in the basement the entire time, shoots Warren from below, causing him to faint. When he wakes up, Mannix has dragged him onto the bed. Mannix, who is holding Domergue, Douglas and Hicox at gunpoint, then hands Warren his gun back. Together, they threaten to kill Daisy if Jody doesn't come out of the basement. Jody gives himself up and Daisy is glad to see her brother, when he comes out of the basement, but her happiness turns to horror seconds later when Jody is shot by Warren.

Daisy then tries to make a deal with Mannix, claiming that she has 15 gang members in Red Rock who will come for her once the blizzard is gone. She tells Mannix to shoot Warren and he will be let alive, as he hasn't yet done something she can't forgive. She also tells him that he can take the corpses of her dead gang members to collect the bounty. Chris rejects the deal, telling her that he does not believe in her 15 gang members, instead believing that all the gang members are lying dead in the cottage. He calls her a lying bitch who would say whatever necessary to escape the hangman's rope, but collapses on the ground seconds later due to blood loss. Warren is horrified as he has no gun to defend himself against Daisy, who is trying to get to Mannix's weapon. Still being chained to Ruth's corpse, she uses a nearby machete to cut of Ruth's arm, but Mannix regains consciousness before she can reach him and shoots her in the stomach.

Mannix then wants to finish Daisy off by shooting her in the head, but Warren stops him. He reminds Mannix that the last thing Ruth did when alive was saving Mannix' life by warning him of the poisoned coffee. Knowing that Ruth did not shoot Daisy when he had the chance because he wanted her hanged, Warren and Mannix proceed to hang Daisy in the cottage, watching and laughing as she slowly suffocates and dies.

Daisy on the stagecoach. 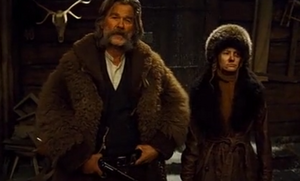 Ruth introduces Daisy to the rest. 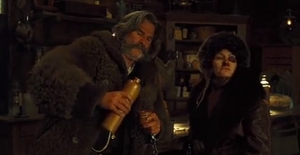 Daisy at the bar with Ruth.

Daisy reveals that she has an ally in the cottage.

Daisy smiles when her brother, Jody Domergue, appears from the basement.

Daisy is horrified after watching her brother die.

Daisy is hanged from the rafters and slowly suffocates to death.