Leader of the Vox Populi

Succeed with her rebellion against Comstock.

Daisy Fitzroy is the secondary antagonist of Bioshock Infinite and a supporting character in the two-part DLC expansion Bioshock Infinite: Burial at Sea. She is the leader of the resistance group known as the Vox Populi. She is shown to deeply care about her cause for freedom and is willing to sacrifice herself to ensure its success.

As the Vox Populi grew more and more powerful and their ideals became increasingly extreme, Fitzroy sought to destroy The Founders and their sympathizers. She is also aware of and her powers, and wishes to harness them for the benefit of her agenda. Centralizes on her followers taking over an area of whilst terrorizing of the remaining citizens in the area. She appears on propaganda posters throughout the city, and recordings of her messages are frequently projected onto large crimson sheets with speakers booming her voice across the surrounding area, in an attempt to vandalize the Founders' displays and property as well as rally support. During the trailer, she bears a distinct foreign accent different from the English spoken in Columbia.

During the course of the original game, Fitzroy initially appears as an ally who transports Booker DeWitt to Jeremiah Fink's base in Finktown. Later, however, she soon shows her true colors as an extremist, killing Fink in cold blood (and painting her face with his blood), and eventually threatening to murder his innocent son. She is killed by Elizabeth before she can, however.

As revealed in Burial at Sea, though, Fitzroy had no intention of actually going through with the murder. Rather, the Vox Populi had grown far out of her ability to moderate and control, and recognizing Columbia posed an increasing danger to the multiverse, Robert and Rosalind Lutece convinced her to become a scapegoat to convince Elizabeth there was nothing worth saving. Recognizing no other choice, she accepted, hence her treacherous behavior in the original game. 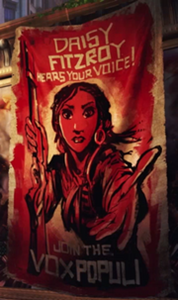 Daisy Fitzroy as one of Vox Populi`s posters 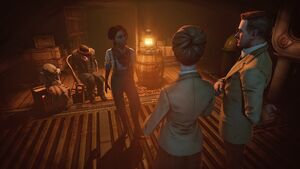 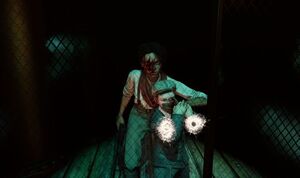 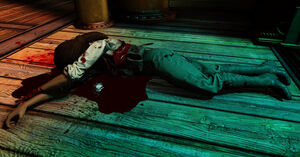 Fitzroy's corpse
Add a photo to this gallery

Retrieved from "https://villains.fandom.com/wiki/Daisy_Fitzroy?oldid=4006239"
Community content is available under CC-BY-SA unless otherwise noted.