In Ghost Post, she was voiced by Hynden Walch.

Much of Daisy's history was revealed in the comic book series The Haunted Mansion by Slave Labor Graphics, which ran for seven issues from 2006 to 2007.

In life, Daisy de la Cruz was a tightrope walker for a traveling circus. After the circus became stranded in the bayous of Louisiana, they set up permanent camp and operated out of the area. Despite being in a swampy, wet area, the circus still did extremely well, and Daisy was one of the reasons. Men from all over the state would come to view her beauty as she walked the tightrope.

Because of her beguiling beauty and graceful skill, many men tried to court her. She would be openly accepting of their charitable gifts and dates, but held a dark secret: she was confidentially extremely greedy and arrogant, and after exploiting men for their money, gifts, and dates, she would use powerful magic to transform the men into pet alligators, which she would use in both her act and during practice.

These victims were stuck forever in their animal forms, so they harbored strong feelings of hate and vengeance towards the woman who had cursed them. Year after year, they would wait eagerly below her as she performed, waiting for the rope to break and her to fall into their waiting jaws.

Though it is not shown, Daisy's appearance in the Haunted Mansion as a ghost confirms that, one day, the rope did indeed break and she fell, most likely devoured by her past victims.

Now a ghost, Daisy haunts the Mansion, appearing in one of the Stretching Portraits. The portrait shows her standing on a fraying rope over the gaping maw of a hungry alligator (most likely a depiction of her death).

In the queue line for the Haunted Mansion at Walt Disney World, she appears under her alias Sally Slater in a poem by Prudence Pock, stating: "In the swamp, poor Sally Slater was eaten by an alligator.".

She appears in the interactive game Ghost Post, under her alias of Sally Slater, and serves as the spokeswoman and committee chair of the Committee of Wandering Ghosts, who are seeking help from both the living and the dead to solve the mystery of the Great Unraveling.

Daisy is shown to be greedy and manipulative, using her seduction and charm to lure men to their fates. She is otherwise cold and calm, and does not do much in the attraction, possibly feeling remorse. However, she stopped with her evil after her death, and even became a friend to many of the ghosts in the mansion. 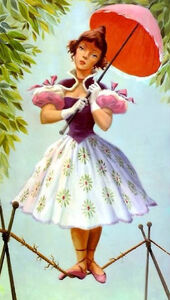 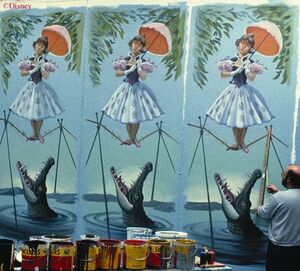 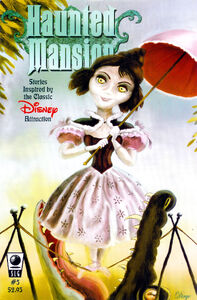 Daisy on the cover of the comic. 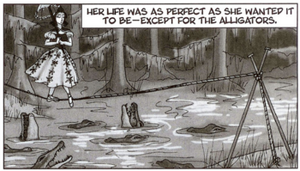 Daisy in the comic.
Add a photo to this gallery

Retrieved from "https://villains.fandom.com/wiki/Daisy_de_la_Cruz?oldid=3604195"
Community content is available under CC-BY-SA unless otherwise noted.