Member of the Tullece Crusher Corps.

Find planets to grow the Tree of Might on.

Daizu (ダイーズ in Japanese), also called Daiz (Funimation dub), is a member of the Tullece Crusher Corps. who are the henchmen Tullece and a villain from the Dragon Ball Z film, The Tree of Might.

Along with Amond, Cacao, Rasin, and Lakasei, Daiz accompanied Turles to Earth, where they could plant the Tree of Might. After the Z Fighters showed up so as to stop the Tree of Might from draining the planet's life energy, Daiz and the rest of Turles warriors fought them and won rather easily. They then took on Goku, only for the Saiyan to beat them using his Kaio-ken technique. Daiz was killed by a powerful punch that Goku delivered to his face.

Daizu makes his first appearance in a video game as a playable character in Dragon Ball Heroes. 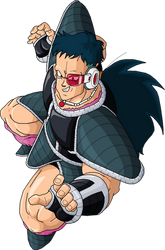 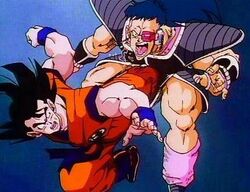 Goku's sneak attack on Daizu.
Add a photo to this gallery

Retrieved from "https://villains.fandom.com/wiki/Daizu?oldid=3746597"
Community content is available under CC-BY-SA unless otherwise noted.